[ The Korea Herald – Send E-mail ]
Sanctions hinder humanitarian efforts in North Korea
Legislator claims Seoul’s plan to give $8 million to World Food Program, UNICEF impeded by US, citing US envoy to Seoul.
By Park Han-na
Published : Mar 18, 2019 - 17:07
Updated : Mar 18, 2019 - 19:19
Humanitarian activities for millions of hungry and sick people in North Korea are at risk of being scaled back due to economic sanctions and donor fatigue amid nuclear talks between Washington and Pyongyang that struggle to make tangible progress.

One of the world’s poorest countries, with over 43 percent of the population undernourished, the North’s food production touched its lowest point in 10 years last year. 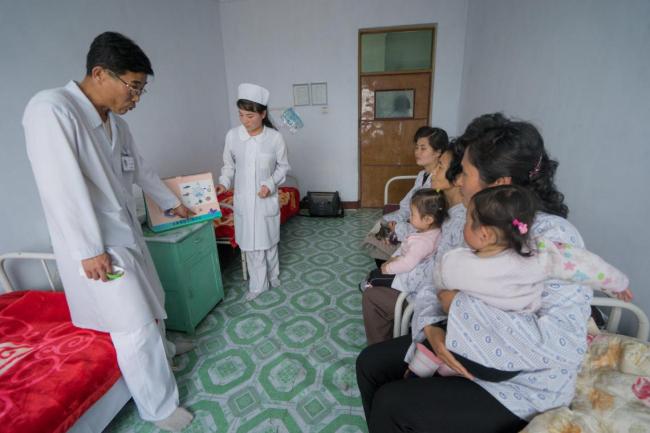 A North Korean paediatrician counsels mothers in Jongju City Hospital about care for their children. (UNICEF)

Tough sanctions slapped on the country by a number of countries and international bodies are believed to be deepening the economic recession as they ban its key exports and imports, including fuel and machinery that could be used for enhancing the communist nation’s nuclear capability.

Such international restrictions adversely affect humanitarian programs, especially the pre-operational procedures as approvals for traveling to North Korea are often delayed. They also hamper the delivery of life-saving assistance as related materials are subject to sanctions waivers that take time to process.

It is one of the groups that have received a total of 18 humanitarian approvals from the UN Security Council Sanctions Committee so far this year. It plans to carry out a project for tuberculosis, hepatitis and pediatric patients until mid-July. The sanctions waiver is valid for six months.

“We hope that unintended constraints on humanitarian activities (caused by significantly tightened sanctions) can be proactively eased for the sake of the lives and health of millions of ordinary and vulnerable North Koreans,” Linton said.

A report released on March 11 by the UN Panel of Experts on North Korea, specified areas of concern that have adverse humanitarian consequences for the civilian population.

The areas include delays in receiving exemptions, collapse of the banking system, delays in customs clearance, a decrease in willing foreign suppliers, increased cost of humanitarian-related items and operations and diminished funding for those operations.

Sanctions have disrupted the banking system that aid groups rely on to access funds, forcing long delays or cancellations of key projects.

“The banking system, used to bring funds into the country to pay for day-to-day operational costs, has been suspended since September 2017. Attempts to find a replacement have so far been unsuccessful,” the UN’s 2019 North Korea Needs and Priorities report said.

The report also pointed out that suppliers are also reluctant to import items due to the complex procedures, delays in port clearance, higher expenses and reputational risks. “With the limited availability of suppliers, the costs to source items have also increased.”

Despite the UNSC’s move to strengthen the humanitarian exemption mechanism by adopting guidelines for the timely provision of aid to North Korea in August 2018, loopholes still remain, hampering assistance programs.

With the sanctions in place, dwindling funds force international agencies to cut back on their programs in North Korea. Funding for humanitarian operations has declined significantly over the last five years.

UN agencies and nongovernment organizations appealed for $111 million to meet the needs of 6 million of the most vulnerable people. The appeal was only 24 percent funded, in what the UN called “one of the lowest funding levels in 10 years and one of the lowest funded appeals in the world,”

UNICEF, which has been working in North Korea since 1985, said securing funds for its work in the country has been challenging.

“Data released by the government of DPRK (North Korea) and UNICEF in June 2018 showed that humanitarian assistance is making a difference in the lives of women and children across the country, but we still have a way to go before all children have what they need to reach their full potential,” said Shima Islam, a spokesperson for UNICEF.

Relief groups argue that humanitarian actions should not be subordinate to political interests and military rationale. However, tensions surrounding North Korea’s nuclear ambitions appear to be weighing on some donor countries, including the US.

Washington reduced the amount of aid allowed into North Korea last summer as a part of the Trump administration’s “maximum pressure” campaign aimed at persuading the country to give up its nuclear weapons program.

The US has used its influence in a UN sanctions committee to block or delay relief groups’ requests to be allowed to deliver assistance to North Korea, according to a Foreign Policy magazine report in January.

“But the effort led to protests from humanitarian relief organizations and left the United States diplomatically isolated at the UN,” the report said.
In the face of mounting criticism for barring “the most basic humanitarian assistance,” the US lifted the travel ban for American aid workers to North Korea starting January.

“The US policy appears to have undergone a subtle shift. Initially, it looked like the US was going to try to stop humanitarian assistance altogether,” Stephan Haggard, a University of California San Diego professor, told The Korea Herald by email.

The fate of aid delivery, at least for those from the US, seems to be tied to the next round of nuclear negotiations after the second summit between US President Donald Trump and North Korean leader Kim Jong-un in Vietnam in February fell apart due to disagreement over sanctions and denuclearization.

“Recently -- if negotiations in fact get back on track -- this could be an area where the US could signal more cooperation,” he said.

South Korea, too, has been hesitant in providing funds to international organizations for purchase of food aid, although such assistance is not subject to sanctions.

Seoul’s plan to deliver on its 2017 pledge to give $8 million to the World Food Program and UNICEF was impeded by Washington, according to Rep. Song Young-gil of the ruling Democratic Party of Korea, citing a US envoy to Seoul. The unification minister said the government hasn't completed consultation with the international community over the matter.

North Korean Vice Foreign Minister Choe Son-hui’s recent remark that its leader may rethink the moratorium on missile launches and nuclear tests and news reports that the country has begun rebuilding a rocket launch site have sparked fresh concerns.

“Unfortunately, it is a sad fact that when North Korea is putting pressure on international norms by pushing on its nuclear and missile programs, it becomes harder to get support for combined appeals through the UN,” Haggard said.