North Korea is considering ending talks with the US, a senior North Korean diplomat said Friday.

In a press conference for foreign media in Pyongyang, the North’s Vice Foreign Minister Choe Son-hui said Pyongyang had no intention of giving into US demands. 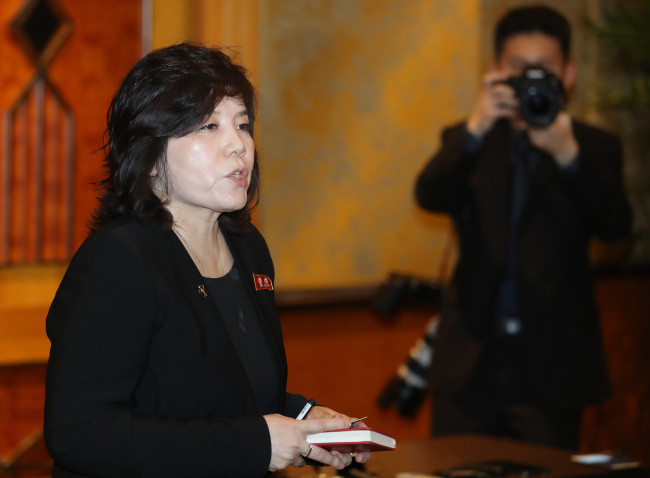 (Yonhap)
“We have no intention of compromising in any form to the demands of the US,” Choe was quoted as saying in foreign media reports.

She also said the US had “lost a golden opportunity” at the US-North Korea summit in Hanoi on Feb. 27 and 28.

In response, Seoul's presidential office said that the South Korean government will continue the efforts to faciliate dialogue between US and North Korea under any circumstances.

Choe also revealed that North Korean leader Kim Jong-un would soon decide whether to restart the North’s nuclear and missile development programs. According to Choe, the decision will be included in an official statement from Kim concerning the direction North Korea plans to take in the wake of the Hanoi summit.

At the summit, US President Donald Trump and Kim ended their meeting sooner than scheduled without reaching any agreement. Following the meeting, Trump said the North had demanded full sanctions relief in return for dismantling a limited portion of its nuclear weapons program.

In an unusual move, the North quickly denied the statement, with Foreign Minister Ri Yong-ho saying his country had demanded only the lifting of sanctions that directly affected people’s livelihoods.