[ The Korea Herald – Send E-mail ]
[Weekender] Yongsan redevelopment weighs on Itaewon’s future
By Lee Sun-young
Published : Mar 14, 2019 - 20:49
Updated : Mar 17, 2019 - 09:52
Much of Itaewon’s future hinges on Korean landlords who expect their long wait for investment gains to finally pay off in the coming years.

With a former US base to be turned into a huge public park, many expect the onset of the “Yongsan era,” with the area rising to match Gangnam’s status as an upscale residential and commercial district.

But in that transformation, Itaewon’s unique features as a lively, culturally diverse and expat-friendly neighborhood could be lost.

While the anticipation for development is real, there is a growing anxiety among expat tenants, said realtor Kim Soo-yong. 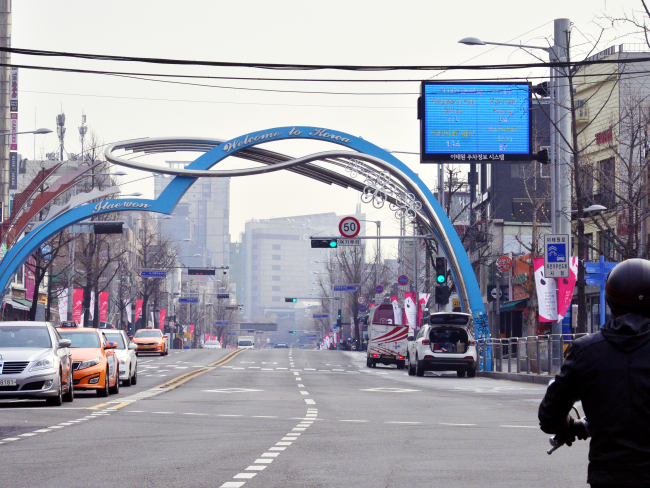 “Of course they worry. Where should they go? There is no place like Itaewon. They have built communities here,” said Kim, head of World Realtor which specializes in expat services in the Itaewon and Hannam-dong area.

According to Yongsan-gu Office, neighborhoods encompassing Itaewon are to be revamped into an “eco-friendly residential and commercial district.”

The office’s guidelines don’t give a clear direction, but property market insiders generally expect to see expensive residential complexes, targeting wealthy Korean households -- though not as tall as seen in other parts of Seoul due to height controls.

Currently, expats mostly live in villas, standalone houses, low-rise condominiums and apartments, paying monthly rent. The rent ranges from above 2 million won down to 500,000 won, depending on house conditions and whether or not a large deposit is required.

“(The landlords) have bought Itaewon property for its future value, (expecting it to be reconstructed or at least remodeled). Tenants’ nationality doesn’t really matter for them,” realtor Kim said.

No Jung-ha, head of public relations at Yongsan-gu Office, did not think that landlords’ collective wish to rebuild their homes could, in any way, negatively affect Itaewon’s unique appeal.

The area where the main Itaewon street is located is not subject to a major change, he stressed, but conceded that there was a limit to what they could do. 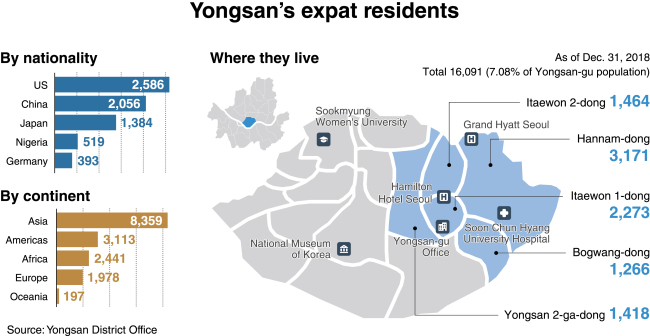 “We do set guidelines to prevent unruly development, but the bottom line is that individuals’ property rights should be upheld,” he said.

However, he reiterated the office’s efforts to serve foreign residents better through the Global Village Center and other projects.

According to local property experts, first to be torn down for reconstruction are the run-down houses in Bogwang-dong and some part of Hannam-dong, designated as the Hannam Redevelopment Zone. South of Itaewon’s main street, this is where many of Itaewon’s African, Asian and Middle Eastern communities are clustered.

The last to change will be Haebangchon, or Yongsan 2-ga-dong, as it sits on the steep slope of Namsan, making it difficult to construct apartment buildings.

Lance Reegan-Diehl, a Canadian musician who has been organizing an expat-led music festival in Haebangchon since 2006, has been an eyewitness to Itaewon’s changes over nearly 20 years.

The relocation of US Army Garrison Yongsan last year from Yongsan to Pyeongtaek was a significant event that affected the neighborhoods’ livelihood, he said.

“With less Korean and US army vehicles and personnel around, it seems more like any modern urban area in Seoul,” Reegan-Diehl who runs a music studio in Haebangchon added.

“While it is understood that there is another 10 years from now, before any walls will come down due to cleanup, the public anticipation is real,” he said.

A hijab-wearing lady, who introduced herself just as a Muslim resident of Hannam-dong, said she was clueless at what’s going to happen when developers get their hands on Itaewon and its vicinity. But it was sad to think that Itaewon could be very different from now, she said.

“It is a special place where we don’t need to worry about discrimination.”