[ The Korea Herald – Send E-mail ]
[Newsmaker] Seungri says he will retire, probe to continue
By Park Ju-young
Published : Mar 11, 2019 - 15:12
Updated : Mar 11, 2019 - 19:50
K-pop star Seungri announced his retirement Monday via Instagram, adding that he will continue to cooperate with the current police investigation over allegations of sex bribery involving foreign investors.

Earlier in the day, police investigating Gangnam nightclubs Burning Sun and Arena said they have arranged with the military to continue investigating the 29-year-old member of boy band BigBang even after he enlists for military service later this month.

Investigators from the Seoul Metropolitan Police Agency raided Arena on Sunday to collect evidence related to Seungri, who has been booked on suspicions of arranging sexual bribes for potential investors.

A local media outlet disclosed social media messages in which Seungri appears to tell an employee of the Burning Sun club, who was then an Arena employee, to arrange sexual services for his foreign VIP customers.

As the singer had mentioned Arena as the venue where the “lobbying” would take place, police plan to investigate involvement of the club’s employees in the case. 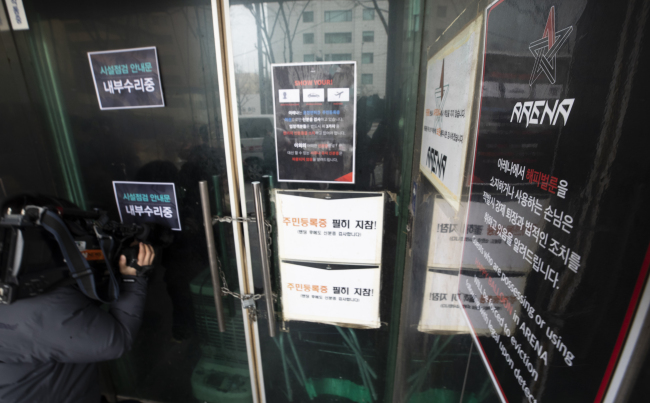 (Yonhap)
On Sunday, police booked the singer, who is slated to enlist for military service on March 25, as a suspect in the case.

National Police Agency Commissioner General Min Gap-ryong on Monday said police would continue the probe even after the singer starts military service, following discussion with the Ministry of National Defense.

Some celebrities whose names were in the group message concerning alleged sex bribery were summoned for questioning as well, according to police.

Meanwhile, Seoul’s Gangnam Police Station sent five investigators to raid the Seoul regional office of the National Tax Service on Friday to gather evidence on alleged corrupt ties between the office and Arena regarding tax evasion.

Police have been investigating the club since the end of 2018 over allegations the club evaded some 15 billion won ($13.2 million) in taxes.

According to Yonhap News Agency, a former employee reported the club’s alleged tax evasion to the NTS in 2017. He submitted to the NTS the club’s accounting records for 2014-2017 and claimed a man surnamed Kang, believed to be the owner of Arena, had doctored the books at two studio flats in Gangnam.

Arena is suspected of evading taxes by understating its sales and overstating salaries.

The raid was carried out as police found evidence the NTS Seoul Regional Office had not properly investigated the case.

The NTS’ office in 2018 accused six representatives of the club, who did not include Kang, of suspected tax evasion amounting to 15 billion won. Police now believe Kang was deeply involved in the case and the true amount extended well into the tens of billions.

Through the police investigation, 10 people have been booked, including Kang, and Seoul officials of the NTS have been summoned for questioning.

Police also suspect Arena gave money to officials at fire stations and the district office. Exact amounts of money and the people involved in the case have not been disclosed, but an accounting book reportedly contains records showing millions of won in cash being paid.

Police plan to continue to investigate to find out whether the nightclub lobbied public officials in charge of overseeing fire safety and food hygiene at the club.