This bold sentence from the 2017 novel “Pachinko” by Lee Min-jin, a National Book Award finalist, is the title of the Korean Pavilion at the 2019 Venice Biennale, director Kim Hyun-jin announced Tuesday at a press conference at the Arko Art Center in Seoul. 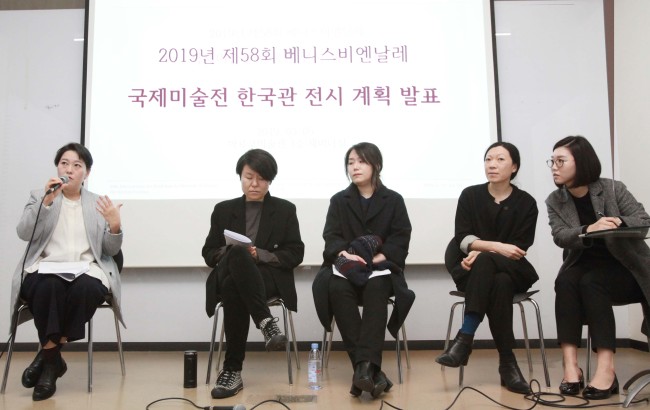 Kim Hyun-jin, director of the 58th Venice Biennale's Korean Pavilion, speaks during a press conference held on Tuesday at Arko Art Center in Seoul. Joining her, from left, are Siren Eun Young Jung, Nam Hwa-yeon and Jane Jin Kaisen. (Arko Art Center)
“I found the sentence, the very first sentence of the novel, clearly captured the voices of people who strived to survive, bearing oppression and difficulties, as a result of male dominance throughout history,” Kim explained.

“I also think the novel -- which is based upon the resilience of female characters -- fits the themes of research-based works to be introduced at the Korean Pavilion, which endeavor to rewrite history with the narratives and perspectives of people marginalized on the basis of gender,” Kim added.

At the upcoming exhibition three female artists -- Jung Eun-young, Nam Hwa-yeon and Jane Jin Kaisen -- will introduce video works that highlight the voices of women who have been marginalized throughout male-dominated mainstream history.

Jung, the winner of Korea Artist Prize 2018, will introduce work that is grounded in the notion of “gender performativity.”

Her piece at the Korean Pavilion, “A Performing by Flash, Afterimage, Velocity and Noise,” consists of two separate yet connected sections.

In the very first circular room of the Korean Pavilion, Jung will install screens that show footage of Lee Deung-woo, an actress who performed mainly male roles as part of a “yeoseong gukgeuk” company.

“Yeoseong gukgeuk” was a performance genre performed exclusively by women. It was popular in the 1950s but suddenly faded away, and has been the subject of Jung’s art for more than a decade.

The first room serves as a gateway to the next -- a completely dark room with a three-panel screen, where the artist will show a collage of performances by contemporary queer performers in addition to Lee’s.

By combining various kinds of performance footage -- visual and acoustic as well as narrative -- Jung will examine the sociopolitical conditions that surround the marginalization of certain performing arts traditions.

“I hope the viewers recognize that there are histories of individuals that that appear to be hidden, as they failed to become part of mainstream history. I want to show they, however, have continued to survive on their own,” Jung said.

Nam Hwa-yeon’s work revolves around the life and work of Choi Seung-hee, who studied modern dance in Japan and then introduced the genre to Korea before moving to North Korea in 1946. Nam focuses more on delivering the aesthetics of Choi’s performances, rather than on creating a historical document or shedding light on the life of the legendary performer, according to the artist.

Jane Jin Kaisen’s work “Community of Parting” centers on the myth of Princess Bari. According to legend, the princess’s parents abandoned her at birth because of her sex, but she later sacrificed herself to save her parents. Princess Bari was upheld as an ethical role model for women, embodying traditional virtues in the traditional culture.

Kaisen’s work borrows the myth and attempts to see how it persists in the present day and how women continue to be pushed to the periphery.

Kaisen’s video work presents a juxtaposition of various visual and acoustic elements, ranging from portraits of marginalized women, shamanistic rituals and sounds to scenes from different regions of the world -- including Jeju Island, where the artist was born before she was adopted by a family in Denmark.

“We have tried to offer a show that can provide an acoustic and tactile experience of visual information,” Kim said.