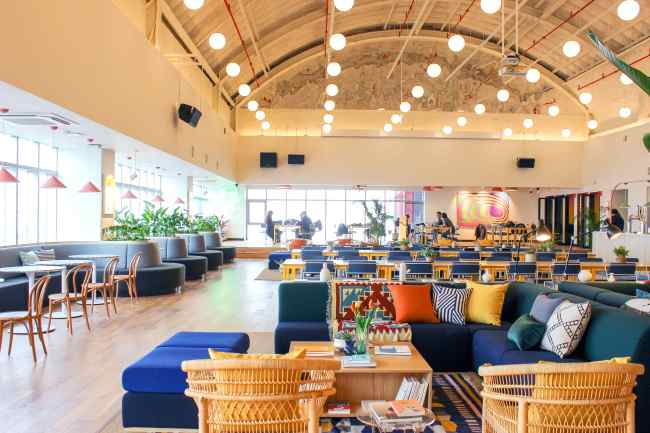 In particular, I was ecstatic about the interior decorations which were subtly modern American and reminded me of my childhood in New York. At the same time, they had a vaguely cosmopolitan touch that made you want to keep looking and touching.

So I was head-over-in-heels to begin a monthlong stay at two WeWork offices. One was in Seolleung office at Teheranro, and the other at Designer Club, which is one of the newest spots to open in Southern Seoul.

Every day, there was some kind of event planned to offer tips and advice, or just to help the tenants take the edge off -- for free. As long you were there, that meant you belong. The past week, I had the pleasure of listening to a special lecture by Balmuda founder Gen Terao, watch a team of tenants mount a rock wall and awkwardly mingle at an after-hours mixer.

To be really frank, these events are a little bit inconvenient for people like me who only have the access to the hot desk -- the lounge area -- because they mean losing your office space.

Still, it was a far cry from stuffy cubicles or closed off work spaces that have little to offer other than than a fancy air purifier and a canteen, which are all provided at WeWork, along with free beer and sometimes free milk.

Another upside in the WeWork experience was the diversity.

People from all ages, men and women, came and went. There was a lot of business talk going on, and sometimes I would learn something just by eavesdropping. On one occasion, I had an earful of how one lady was trying to set up a website, and another time, a young man held a very patient conversation with a potential client who didn’t seem to be getting it.

On the other hand, there was a lot of noise all around. It’s no fault of WeWork, but I was surprised at how lacking so many people were in etiquette. One guest was literally yelling every time he was on the phone. Another was smelling up the place with a dish that looked like buttered rice and kimchi.

Thankfully, there were phone booths in both facilities. It was quite satisfying to slip into one of those every time it got too loud. I also hear some WeWork offices have shower booths, which I am hoping to try out one day.

Another funky thing about WeWork spaces is that every building, every location is different, despite WeWork‘s attempts at a standardized setting. The life styles and work choices of the tenants seem to rub off on the space, sometimes making it annoying, yes, but mostly creating a really unique place.

I’m sure as with all things new, the novelty of WeWork also will wear off with time. And for those desiring a more permanent, homey atmosphere, these coworking offices might not be the answer. Further, a one-month stay at the hot desk may not be enough to cover the essence of WeWork.

However, it simply can’t be denied that it’s doing something magical in Korea. It’s bringing in a taste of the western corporate culture, helping narrow the gap between different groups of people and creating a community.

Even for someone who has not worked so much in a “conventional” office -- reporters usually work outside of the office, at their beats and are ideally constantly on the move -- the WeWork experience was an unforgettable one.


The writer spent one month at WeWork paid for through a monthlong Hot Desk voucher won at a corporate event. -- Ed.