Unlike Cristiano Ronaldo, Floyd Mayweather and Lebron James of the sports world, boccia players are not buried in fame and riches, nor do they have the ability to leap off the ground and perform near-superhuman feats. On the contrary, hurdles often loom large for them, even more so than for most people.

What they do have, however, is an unconquerable spirit that transcends their wheelchair-bound bodies, the story of which will be told through the nonprofit film “Boccia” about the para-sport.

“I love the unfortunate (people with physical disabilities). ... There are so many stories about the boccia athletes, and I wanted to tell their beautiful stories,” said director Natalie Tjahja, an Indonesian moviemaker and activist, in an interview in Seoul.

Boccia is a precision ball sport mostly played by people with severe disabilities affecting their motor skills. The game involves throwing colored balls as close as possible to a white target ball, and the ball can be moved with hands, feet or an assistive device if a player’s disability is severe. While the para-sport has been in the Paralympics since 1984, very few people are aware of it. 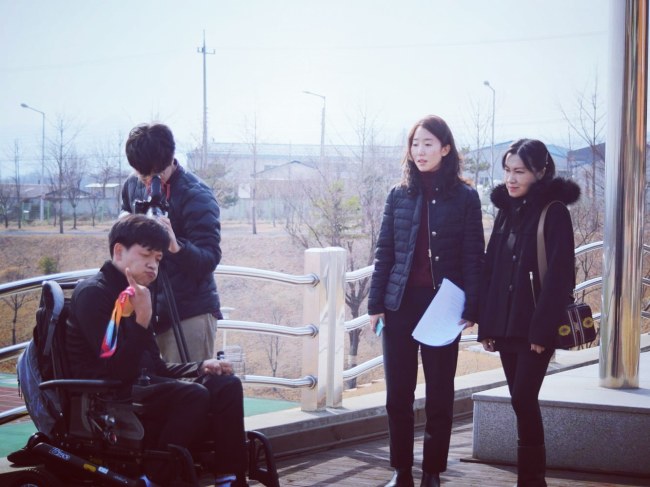 Korean national boccia player Jeong Ho-won (left) is being filmed for the documentary movie “Boccia” in Incheon as director Natalie Tjahja (right) watches.
“I myself only learned of the sport in 2017. Even as I traveled around Asia, I learned that not many people know about it, even at sports stores,” said Tjahja, adding that she hoped to raise awareness of the sport through the film.

Malaysia was the first to offer support for the film, but Paralympic officials from other countries soon followed suit.

“They said that this is about the heart. Not many people know about boccia, and I knew that if I made a film about it, I could raise awareness of the sport,” she said.

She also mentioned how she was inspired by Chutinant Bhirombhakdi, president of the Paralympic Committee of Thailand, who had worked to have the story of Thai para-athletes run weekly on local TV.

Tjahja and a group of volunteers, including 13 people on camera, filmed in Indonesia, Malaysia, Singapore, Taiwan, India, Thailand, Hong Kong and the Philippines before touching down in Incheon on Feb. 27 to shoot the Korean segment.

Leading the way in Korea was Jeong Ho-won, a BC3 national athlete in boccia who won a bronze medal in the individual event and a gold medal for the pairs event at the 2008 Summer Paralympics. 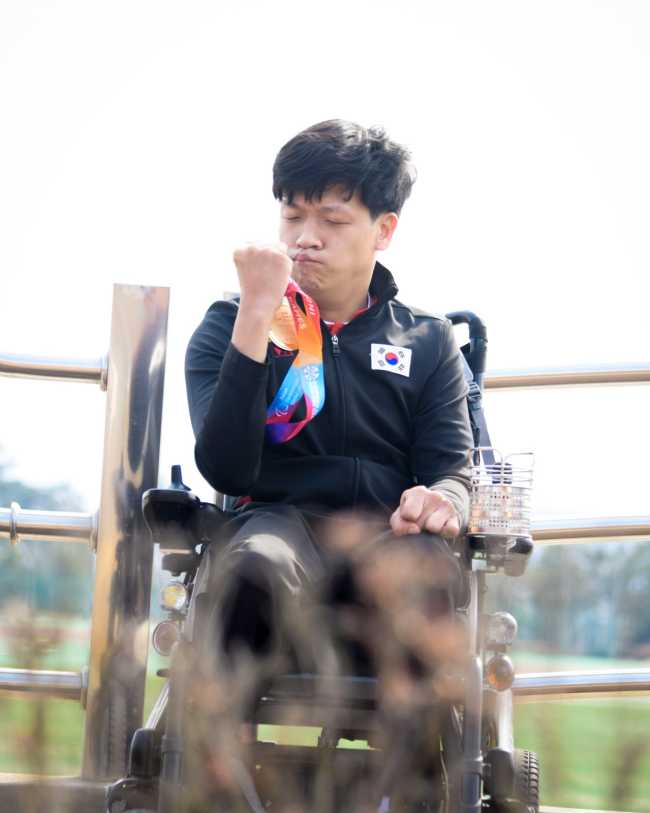 Jeong Ho-won, Jeong Seong-jun and Gwak Min-gyu will appear in the film, and Tjahja said she had hoped Jeong Ho-won would play a key role in the shooting.

“I asked him that if I make a storyboard, could he do the revision. I told him I wanted him to be the director. At first he said ‘I cannot do that! I cannot talk very well. How could I make this happen?’” she said. “When I met him, I treated him like a normal person, not a disabled person. Because he is the movie director. … He does the revision on the storyboard, and the animation (for the film),” she said of the story about how the sport has changed Jeong’s life.

Among the incredible stories she encountered while shooting the documentary was that of Neo Kah Whye from Singapore, who battles through pain by taking 14 painkillers each day to play boccia.

Tjahja’s affection for the underprivileged can be traced back to over a decade ago, when her own daughter, Maria Monique, was diagnosed with a lung disease. Despite bravely fighting her illness to the astonishment of doctors, the child eventually succumbed in 2006 at the age of 7.

Her spirit lives on in her mother, who founded the Maria Monique Lastwish Foundation, which lends a helping hand to disabled children in Indonesia and other parts of the world, aided by a team of volunteers.

In 2018, Tjahja and the foundation carried out a rather peculiar program that involved treating national boccia athletes to a ride on Ferrari sports cars before competing in an exhibition game in Singapore.

Tjahja now hopes to include Japanese boccia athletes in the mix, having just heard from the Japan Boccia Association.

After finishing the film, she hopes to screen the film for free, mainly for people with disabilities, across Asia.

In cooperation with CJ Indonesia, the film will be screened at a CGV cinema in Jakarta from April 28-29, and screening in Yogyakarta is scheduled for May 9. She plans to screen it in Korea and other countries as well.

Tjahja said her goal in making the film is to eventually change perceptions that people have about the disabled.

“I hope that mothers with disabled children would not be disappointed in them, or give them away, like Paralympic athletes in many countries. Instead I hope they (mothers) appreciate them, give them happiness and support to practice boccia,” she said.

“Sometimes when I meet mothers who have children with disabilities, they would say that my son is a ‘son of a cat,’” she said, explaining that the phrase was a derogatory term. “I can give them (a) wheelchair, but what happens after that? Maybe boccia.”

She expressed hopes that the film’s screening would help people with disabilities be proud of themselves.

“So many problems that I’ve encountered is the disappointment that the parents have (in disabled children), which results in them giving the boy away or him killing himself. But if he wins a medal, that would mean your son is not a disappointment. It means he is amazing.”