The United States is seeking to move quickly and with "very big bites" to denuclearize North Korea and offer a brighter future for its people, a senior US administration official said Thursday.

The two countries are engaged in negotiations ahead of next week's second summit between US President Donald Trump and North Korean leader Kim Jong-un.

"I think we need to move quickly and with very big bites. We are not looking to have incremental steps as a key driver of this process," the official told reporters in a press call.

Trump and Kim are set to meet in Hanoi, Vietnam, on Feb. 27 and 28 to flesh out an agreement they reached at their first summit to pursue complete denuclearization of the Korean Peninsula. 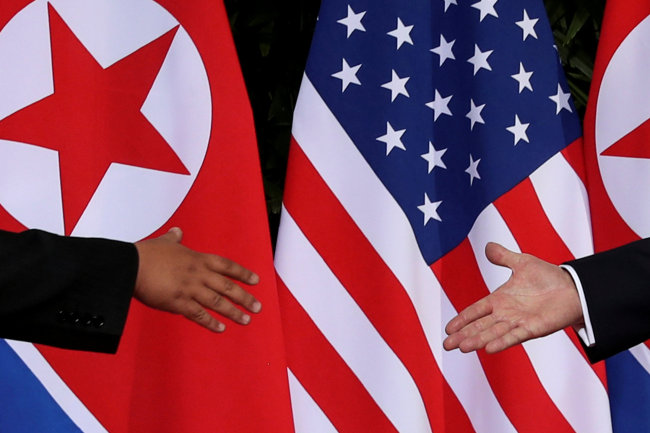 (Yonhap)
The official admitted that developing a shared understanding of "denuclearization" is a top priority in the bilateral negotiations.

He also denied that withdrawing American troops from South Korea was being discussed as part of a deal.

The negotiations are led by US Special Representative for North Korea Stephen Biegun and his North Korean counterpart, Kim Hyok-chol.

The two envoys arrived in Hanoi this week and resumed talks following three days of meetings in Pyongyang earlier this month.

Central to the negotiations is how far the North will commit to dismantling its nuclear weapons and ballistic missile programs and what concessions the US will offer in return.

Among the most talked about items are the closure of North Korea's main nuclear facility in Yongbyon and US acceptance of partial sanctions relief for the North as well as a declaration formally ending the 1950-53 Korean War.

The official made clear that the US will eventually need a full inventory of North Korea's nuclear arsenal, probably "well before" the end of the denuclearization process.

But for now he indicated the immediate priority is to freeze all of North Korea's weapons of mass destruction and missile programs.

"I don't know if North Korea has made the choice yet to denuclearize, but the reason why we're engaged in this is because we believe there is a possibility," he said.

Trump has recently emphasized that he is in no rush to denuclearize North Korea as long as the regime refrains from testing nuclear weapons and ballistic missiles.

"Not in a hurry doesn't mean not important," the official said, adding that it just means the North Koreans will have to make the right choice.

On next week's summit, another administration official said it will be similar in format to last June's first summit in Singapore, with a one-on-one meeting between the leaders, followed by a meal and expanded meetings with their respective delegations. (Yonhap)