ROME (Reuters) - North Korea informed Italy last year that the daughter of its acting ambassador had asked to return home after her father left his post in Rome, the Italian foreign ministry said on Wednesday.

North Korean diplomat Jo Song Gil and his wife went missing in November, and a South Korean newspaper has reported that they have applied for asylum in an unspecified Western country.

Thae Yong Ho, a former deputy North Korean ambassador to Britain who defected to South Korea in 2016, said on Tuesday that Gil could not take his daughter with him when he escaped. 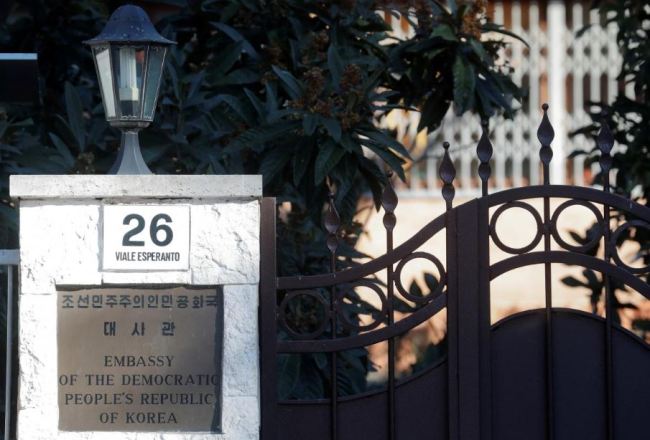 An entrance to the North Korean Embassy in Rome, Italy, January 3, 2019. REUTERS/Alessandro Bianchi/File Photo
Citing his contacts in North Korea, Thae said she had been immediately whisked back to Pyongyang.

In an angry post on Facebook, Manlio Di Stefano, undersecretary at the Italian Foreign Ministry, demanded information about the girl’s disappearance, saying: “Those responsible for this will pay.”

Shortly afterwards, his own ministry put out a statement saying they had been informed by North Korea on Dec. 5 that Jo and his wife had left the embassy on Nov. 10 and that their daughter had been repatriated on Nov. 14.

It said the girl had asked to go back to her grandparents and had been accompanied by female staff from the North Korean embassy. “The Farnesina (Foreign Ministry) does not have any further information about this affair,” the statement said.

Di Stefano, a member of the 5-Star Movement in Rome’s governing coalition, said the unnamed daughter was 17 and Italy should have protected her. “She now risks being tortured by one of the worst regimes in the world,” he wrote.

He declined to comment on his ministry’s subsequent statement.

A diplomatic source in Rome said in January that Italy had no record of Jo seeking asylum there and added that the whereabouts of him and his family were not known.

Thae urged Jo in January to move to South Korea, but he said the fact his daughter was in North Korea complicated matters.

“The level of punishment that the children of a North Korean diplomat who defected would face is completely different depending on whether the parent went to South Korea or a Western country,” he said, suggesting Jo’s daughter would face much harsher penalties if her father went to Seoul.

Antonio Razzi, a former Italian centre-right parliamentarian who is a staunch defender of secretive North Korea, said Jo’s daughter had been abandoned by her parents and was now safe back home with her grandparents.

“Those two wretches left their daughter alone. She is a child and suffers from a disability,” Razzi told Italy’s Adnkronos news agency. “It is normal that she was sent back to her grandparents,” he added, denying she was in any danger.

Pyongyang normally requires diplomats going overseas to leave at least one child at home, but those from the top echelons or seen as the most loyal to the leadership get some exceptions. Thae has said previously that Jo hailed from a wealthy family of diplomats, and was able to take his child with him on his posting to Italy which started in 2015. (Reuters)