[ The Korea Herald – Send E-mail ]
[Newsmaker] Outraged Gwangju citizens take to National Assembly over opposition lawmakers’ Gwangju Uprising remarks
By Kim Bo-gyung
Published : Feb 13, 2019 - 15:43
Updated : Feb 13, 2019 - 19:31
Outraged over inflammatory remarks by far-right politicians about the 1980 Gwangju Democratic Uprising, some 300 family members of those who died during the uprising and Gwangju citizens on Wednesday took to the National Assembly to voice their anger and grief, calling for answers and apologies.

“My husband Jung Ki-bong, an ordinary citizen, was kidnapped by soldiers on the streets. He was let go after being tortured for a month and 10 days at the Army 31st division, which caused severe mental problems. He died a little more than two years after (the incident),” Park Hyung-soon, 70, who has been rallying in front of the National Assembly for the past three days, told The Korea Herald.

“Words cannot describe how furious I got when that man (Rep. Kim Jin-tae of the Liberty Korea Party) insulted the deceased, the families and the movement. The government must reveal the truth about the May 18 Uprising and resolve it once and for all.”

Last week, Rep. Kim Soon-rye of the main opposition Liberty Korea Party referred to family members of those who died in the May 18 movement as a “monstrous group” formed by “pro-North Korea leftists” that is “dipping into tax money.” 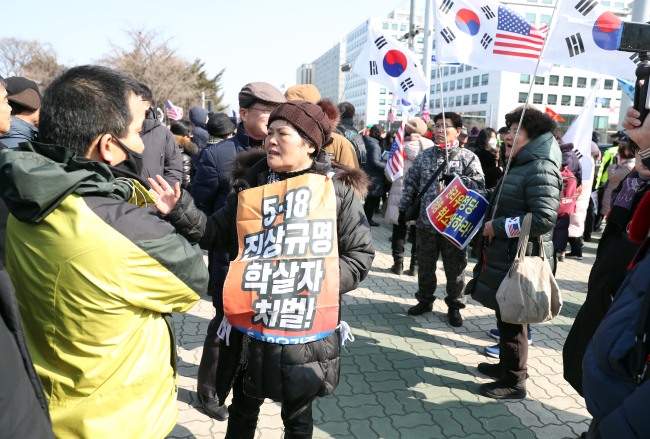 Family members of the deceased (left) on the verge of clashing with far-right Taegeukgi group over offensive May Gwangju uprising remarks made by lawmakers of the main opposition Liberty Korea Party at the National Assembly, Wednesday. (Yonhap)
The remarks were made at a public hearing on May 18 fact-finding organized by Rep. Kim Jin-tae and Rep. Lee Jong-myeong of the Liberty Korea Party.

A controversial far-right commentator, Jee Man-won, was also invited to the hearing where he repeated his stance that the Gwangju Uprising was a “riot” led by North Korean soldiers. The Supreme Court had ruled Jee guilty of defamation for such claims in 2013.

In the face of escalating criticism -- even from within the party -- and mounting pressure for the expulsion of three lawmakers -- Rep. Kim Jin-tae, Rep. Lee Jong-myeong and Rep. Kim Soon-rye -- from the party and their parliamentary seats, Rep. Kim Jin-tae said the calls were “making me famous” and refused to back down.

Some 200 people, including members of the May 18 Memorial Foundation and three May 18 movement associations, came from Gwangju to voice their anger and meet with heads of political parties.

In a meeting with Liberty Korea Party interim leader Kim Byong-joon, Kim apologized for offensive comments made by members of his party.

“I was enraged to hear such comments come out of lawmakers with no historical awareness. A Korean version of the Holocaust denial law must be enacted,” said Park Hyung-chae, 69, a former high school teacher whose hometown is Gwangju. 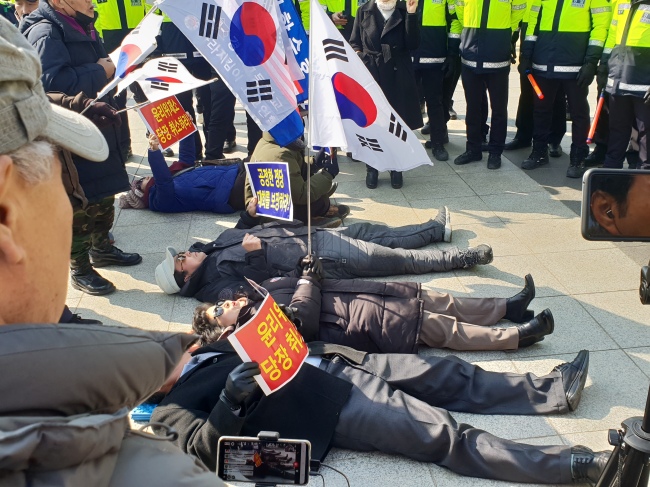 Members of the far-right taeguekgi group rallied at the National Assembly in support of Rep. Kim Jin-tae on Tuesday. (Photo by Kim Bo-gyung/ The Korea Herald)
A protester surnamed Park said, “Upon coming across the news from Gwangju and pictures of organs lying in the streets, I went down there with a couple of friends from Seoul. We weren’t able to go in because by the time we arrived, the soldiers were opening fire at the city entrance to stop people from entering. I couldn’t sit at home after hearing comments made by Rep. Soon-rye and Rep. Kim Jin-tae.”

Pushing to take away their parliamentary seats, four of Korea’s five political parties have filed a petition against the three embattled lawmakers to the National Assembly Special Committee on Ethics.

Opposing such action, some 200 people from the far-right Taegeukgi group rallied at the National Assembly in support of Rep. Kim Jin-tae.

In the latest survey conducted by pollster Realmeter, 64.3 percent supported the expulsion of the three lawmakers, while 28.1 percent disagreed with it.

Family members of those who died during the Gwangju Democratic Uprising have been rallying at the National Assembly since last month, protesting against the conservative party’s recommendation of contentious far-right figures for a special investigation committee on the uprising and urging the government to get to the bottom of what happened in Gwangju.

The special investigation committee is tasked with looking into unresolved questions surrounding the crackdown in Gwangju, such as the actual number of victims.

The deadly military crackdown of the Gwangju Uprising left an estimated 160 dead and some 5,000 injured in the course of 10 days from May 18, 1980. The number, however, is widely expected to be higher, taking into account those who were secretly buried and went missing. There are also claims that 70 of the martial law enforcement troops are on the list of victims.

The lack of clarity has triggered the victims’ families to call on the government to conduct a thorough investigation into the crackdown orchestrated by former President Chun Doo-hwan, who took office in a 1979 military coup.