On Friday, controversial far-right commentator Jee Man-won -- who claims the May 18 Gwangju uprising was a “riot” led by North Korean soldiers -- gave a presentation at a public hearing on May 18 fact-finding and repeated his position.

In 2013, the Supreme Court had ruled that Jee was guilty of defamation for his claims that the North Korean military was involved in the 1980 Gwangju Uprising.

At the public hearing jointly hosted by Rep. Kim Jin-tae and Rep. Lee Jong-myeong, Rep. Kim Soo-rye fueled controversy with his remarks that “pro-North Korea leftists are dipping into tax money through May 18 patriots, a monstrous group they created.” 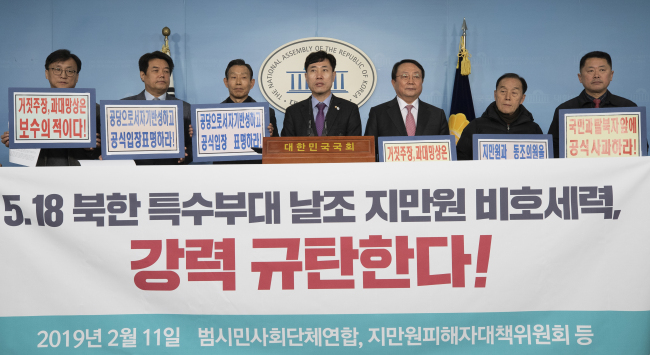 Rep. Ha Tae-kyung (center) of the minor conservative Bareunmirae Party speak out against offensive remarks made by far-right figure Jee Man-won at the National Assembly on Monday. (Yonhap)
Amid a public backlash, a growing number of Liberty Korea Party members have criticized the remarks, while floor leader Na Kyung-won argued there can be different interpretations of history.

Ruling party leader Lee Hae-chan lambasted the embattled lawmakers and the main opposition party leadership in a statement, calling on the Liberty Korea Party to apologize to the public and to revoke the membership of the three lawmakers.

More legal action is to come with Rep. Choi Kyung-hwan of the Party for Democracy and Peace and Rep. Sul Hoon of the ruling party, who have been recognized as May 18 patriots, expected to sue the three individuals later this week.

Bareunmirae Party leader Sohn Hak-kyu lashed out at the main opposition party, saying, “The Liberty Korea Party’s historical awareness shows the status quo of the conservative bloc. The National Assembly and the public cannot leave the lawmakers to disparage history. They must be penalized through the Special Committee on Ethics.”

Despite the criticism, Rep. Kim Jin-tae said Sunday, “I am not sure why calls to dismiss the party members and parliamentary seat of a member of another party have surfaced,” adding that such calls were “making him famous.”