South Korean LPGA veteran Ji Eun-hee is off to a winning start in 2019.

Ji captured the Diamond Resorts Tournament of Champions in Lake Buena Vista, Florida, on Sunday (local time) by two shots over fellow South Korean Lee Mi-rim. After a final round of 1-under 71, Ji finished at 14-under 270 for her fifth career LPGA win, worth $180,000. 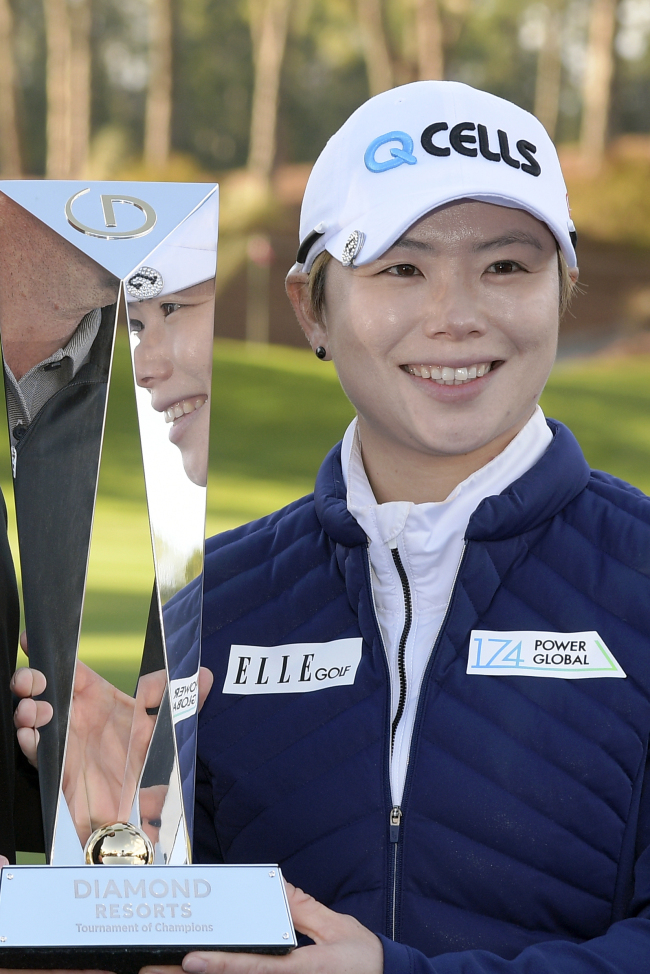 Brooke Henderson was lurking just one shot behind. Lee was four strokes back of the co-leaders.

Ji stumbled out of the gate with back-to-back bogeys on the first two holes but recovered with consecutive birdies at the third and fourth holes. With another bogey at the sixth, Ji was 1-over through the front nine.

On the same hole, Lydia Ko dropped to third place with a double bogey, with Lee Mi-rim now putting pressure on Ji with her late charge.

Ji's lead over Lee dwindled to one with a bogey at the 15th, but she immediately bounced back with a birdie at the 16th and hung on for a two-stroke win at the inaugural event.

Ji said chipping in for a birdie at the third hole from 15 yards out was the major turning point for her round.

At 32 years, eight months and seven days, Ji is now the oldest South Korean winner on the LPGA Tour, breaking the previous record of 32 years, seven months and 18 days set by Hall of Famer Pak Se-ri in May 2010.

The tournament was open to LPGA winners from the past two seasons, though a few South Koreans, including world No. 2 Park Sung-hyun and the reigning Rookie of the Year Ko Jin-young, skipped the event.

After winning her maiden major title at the 2009 U.S. Women's Open, Ji went more than eight years without another victory. She ended the dry spell in October 2017 and picked up another W in March last year.

Ji now has a victory in three straight seasons.

"Over the years, I went through many swing changes," Ji said.

"I used to have a complicated approach to my swing, but now I've made things a lot simpler. It's a nice boost to my confidence to win the first tournament of the season."

The 32-year-old began the 2019 season ranked No. 32 in the world, and she will certainly crack the top 30 after her latest win.

In 2018, South Korean players combined for nine victories in 32 tournaments. There will be 32 events again this year.

The tour will resume on Feb. 7 with the ISPS Handa Vic Open in Australia. (Yonhap)