The new law, designed to ease ownership rules for internet-only banks, enables information and communication technology companies to own up to 34 percent of an internet-only bank, up from the 4 percent (10 percent without voting rights) threshold stipulated by Korea’s Banking Act.

The change will allow current corporate operators of internet-only banks -- Kakao, which operates Kakao Bank, and KT, which runs K bank -- to raise their stake ownership in their online-exclusive banks. 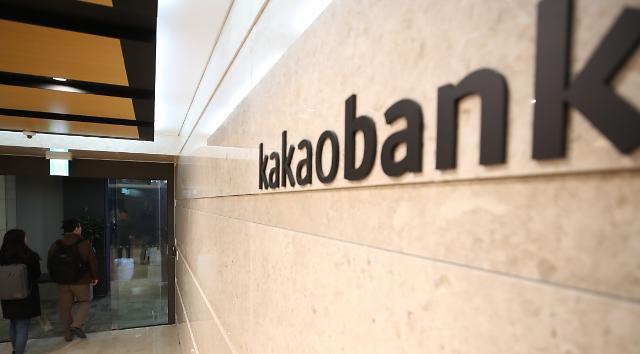 (Yonhap)
K bank and Kakao Bank were launched in 2017 as Korea’s first banks operating without brick-and-mortar branches. Both internet-only banks were established with financial companies as majority shareholders.

As the new law kicks in, Kakao and KT will set out to increase their stakes in their respective internet-only banks and step up as majority shareholders.

Kakao is seeking to purchase the stake held in Kakao Bank by Korea Investment Holdings, the bank’s majority shareholder, by exercising a call option.

Under the call-option deal, Kakao is able to purchase a 20 percent stake in Kakao Bank at 5,000 won ($4.50) per share if related regulations change to permit nonbanking entities to own a more than 30 percent stake in an internet-only bank.

KT previously stated in a conference call its intention to increase its shares in the internet-only bank to 34 percent, by purchasing the new shares K bank plans to issue to raise new capital.

However, whether this ownership change will actually happen is yet to be determined, as additional regulatory hurdles remain. Kakao and KT have to pass an adequacy review by the Financial Services Commission to determine their majority stake ownership eligibility.

The special law governing internet-only bank includes a clause stipulating that a company applying to possess more than a 10 percent stake in an internet-only bank must not have violated laws related to fair trade or taxes in the past five years.

However, the FSC can make an exception if it determines that the violations are minor enough to be overlooked.

Both Kakao and KT have been penalized for fair trade violations in recent years. In 2016, KT was slapped with a 70 million won fine for violating fair trade laws in placing a bid for a project to develop a subway advertisement information technology system.

Kakao M, which was merged into Kakao last year, received a 100 million won fine in 2016 for violating fair trade regulations in fixing the prices of online music content.

In addition to the expected ownership shifts at Kakao and KT, the new banking regulation will allow new corporate players to create internet-only banks.

So far, Korean internet giant Naver and e-commerce operator Interpark have mentioned their intentions to set up their own internet-only banks in Korea. Foreign ICT companies as well as gaming companies are also eligible to open web-only banks under the new law.

The FSC plans to receive registration for new internet-only banks in February or March, and to hand out permits before June this year.