Widely spread throughout the city, dense apartment complexes have shaped Seoul, more than a third of whose residents live in apartments. 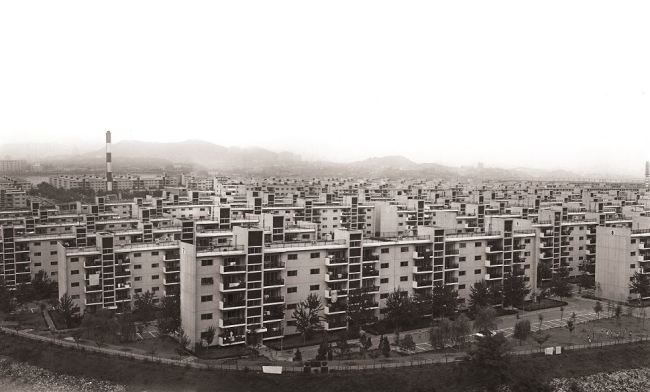 A 1977 photo shows one of the early apartment complexes build in Banpo-dong, Seocho-gu, Seoul. (Seoul Museum of History)
In Europe and the US, particularly after the War ll, the need for housing drastically increased. Modern architects such as Le Corbusier pioneered in developing a multi-family residential housing projects -- as seen in the architect’s unrealized urban master plan “Radiant City,” which became an important model for many 20th-century urban planning.

Following the Corbusian model, architects tried to implement the large-scale housing template, but many fell short and ended up becoming urban slums.

Seoul’s early apartments, in part, were adaptation of the Western trend. The nation’s capital was still recovering from the Korean War and also had to resolve an imminent housing issue that accompanied a dramatic increase in its population.

In the early 1960s, Seoul was full of shanty towns, formed by those who lost their homes in the war, and the refugees.

The existing houses in urban areas were still in more or less traditional urban scape. The tile-roofed and thatched-roof houses were still the main forms of housing. The houses were lined up side by side, so close that it was difficult to tell if they are separate or not.

The area around the third Namsan Tunnel in Yongsan-gu, Seoul in 1977. (Seoul Museum of History)
“My cousin lived just around a corner. Through the backdoor of my house, I went out and turned around the corner to go to my cousin’s house, even at night to play with her,” said a 58 years old female citizen, recalling the town in Seoul she lived in when she was elementary school student.

It was in the late 1960s, when large-scale apartment complexes started to appear in Seoul.

In order to supply sufficient housing for citizens and to improve the urban landscape, the government decided to build 2,000 apartment blocks on an area of 2.54 square kilometers in downtown Seoul. The citizen apartment project started with Geumhwa Apartments in 1968.

The construction of apartment complexes was executed in a military style.

The nation was under Park Chung-hee, an Army general-turned politicia; strongman. Kim Hyeon-ok -- also a graduate of the Korea Military Academy -- became Seoul Mayor in 1966 and took the construction initiative.

Mayor Kim, who later earned nickname “bulldozer,” led the citizen apartment project and other major developments. After slum clearances, roads were constructed and so were apartments. In 1969, a total of 406 apartment blocks were built, providing homes to 15,840 households, according to data provided by Seoul Museum of History.

This apartment supply led by the city government, however, came to a stop after the Wau apartment collapse, a disaster that left 33 dead and 40 injured.

The disaster put a permanent halt to the government-led apartment project, but more significant change soon followed in Seoul during the 1970s, particularly in the area south of the Han River. In 1972 and 1973, the government enacted laws that allowed the government to offer financial support to the private sector, to draw more private sector involvement in the city’s housing supply. 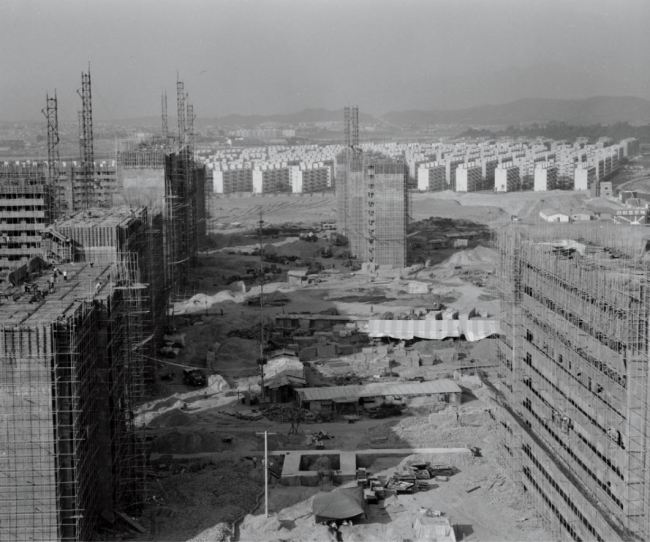 A 1978 photograph of an apartment complex construction site in Jamsil, Seoul. (Seoul Museum of History)
Since then more private builders came into play, targeting the city’s growing middle class.

Larger and higher -- 10-15 story -- apartment complexes were built in what is now known as the Gangnam area. Apgujeong and Jamsil areas were some of the early cases, where the large-sized complexes were built. Both places were previously either empty or agricultural areas.

Meanwhile, the apartment complexes here have faced criticism from the architects for a long time, largely because the they have been built for financial and practical reasons, with little regard to aesthetics.

The dominant take on high-rise apartments by the architectural circles, as well as by the public here, is that they are assets but not architectural works. They have been long excluded from architectural and cultural assessments, for better or for worse.

A 1978 photo of the area nearby Gongdeok Station, Gongdeok-dong, Seoul (Seoul Museum of History)