[ The Korea Herald – Send E-mail ]
Pianist Park Jong-hai to have fun playing at Kumho Art Hall ‘playground’
By Im Eun-byel
Published : Jan 8, 2019 - 16:40
Updated : Jan 8, 2019 - 16:40
Kumho Art Hall will be up-and-coming pianist Park Jong-hai’s “playground,” where he will meet the Korean audience throughout the year and showcase his musical color.

The 30-year-old pianist was selected as the art hall’s artist in residence for this year. Each year, the art hall, run by the Kumho Art Cultural Foundation, selects an under-30 classical musician starting to build up a career. The annual program, titled “Playground” this year, provides opportunities for musicians to further develop their craft and offers them a performance venue. 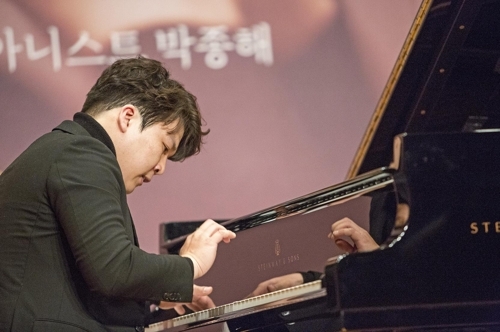 Pianist Park Jong-hai performs during a press showcase at Kumho Art Hall in Gwanghwamun, central Seoul, Monday. (Kumho Art Cultural Foundation)
Park, a rising pianist who received an award at the 2018 Concours Geza Anda, was selected as the art hall’s seventh resident artist for his exceptional musicality and ability to interact with the audience.

“I like to play around with the piano. Being the artist in residence of Kumho Art Hall, I would like to have fun,” Park said at a showcase held Monday at the art hall in Gwanghwamun, central Seoul.

“Wherever I go, the (performance) format is usually a one-time event, lacking connectivity. I have been wanting to perform in a series, showing more various repertoires,” the pianist said.

Park will hold five performances throughout the year, starting with Thursday’s “New Year’s Greeting” during which he will perform transcriptions from Leopold Godowsky’s Renaissance collection, Schubert’s Piano Sonata No. 19 in C Minor, selections from Sergey Prokofiev’s “Romeo and Juliet” and his Piano Sonata No. 7 in B Major.

At the press event, Park performed “Sarabande” and “Tambourin” from the Renaissance collection, and “Montagues and Capulets” from the “Romeo and Juliet” ballet. His performance was heavy with emotion, with the forms of expression changing in line with the performed pieces.

In March, Park will perform under a program titled “Real Sonata,” followed by “All the Variations in the World” in May,” “Memorial” in August and “2019 Last Sequence” in December. The series will continue at Yonsei University after the art hall moves there in April.

It was not easy for the artist to come up with programs for the whole year. But he managed to do so by selecting repertoires based on what he truly wants to play.

The program in May includes a variation written by composer Jeon Min-jae, the pianist’s close friend. Explaining that he is close with composers, he said that he consults composers instead of asking fellow pianists for advice.

“The advice that a pianist and a composer gives is different,” he said. “Composers give more objective advice on the original intentions of the said pieces.”

Kumho Art Hall means a lot to the artist, having debuted there in 2005 through the “Kumho Prodigy Concert.” He described the hall as “a place of verification,” and a place to test what he has done and what he can do.

Park began playing the piano at 7, considered late for a pianist. Upon moving to the US, he played the instrument every day after school, as he had nothing else to do. After studying at the Korea National University of Arts, Park has been studying under Arie Vardi in Hanover, Germany.

“I actually try really hard to hide my worries and concerns when playing difficult pieces. What I really want is to deliver the music itself to the audience,” Park said, responding to comments that when he plays the piano, it seems as if he were really “playing around” with the instrument.

All tickets for the upcoming artist-in-residence concert performances are 40,000 won ($35.60). For more information, visit www.kumhoarthall.com.