[ The Korea Herald – Send E-mail ]
Samsung mulls slowing expansion of chip facilities in 2019
Chipmakers likely to cut back spending on production in order to prevent rapid falls in memory prices
By Song Su-hyun
Published : Dec 25, 2018 - 15:21
Updated : Dec 25, 2018 - 15:21
Samsung Electronics, the world’s No. 1 memory chip provider, is considering slowing the pace of expanding its production facilities next year amid negative forecasts about growth of the global semiconductor market, according to the industry on Tuesday.

At a biannual meeting on the tech titan’s global business strategies held last week, the device solutions division’s main agenda was how to cope with the expected oversupply of memory chips next year, as demand is widely forecast to go downhill, with the market facing a stall in the “super cycle” driven by an emerging data economy.

“Adjusting the pace of increasing production capacities for DRAM and NAND flash chips was discussed at the meeting presided over by Vice Chairman Kim Ki-nam and heads of the chipmaker’s overseas branches,” an industry source said. 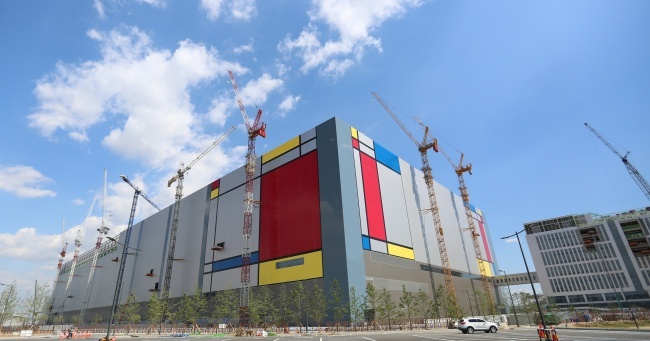 Samsung's first plant in Pyeongtaek, Gyeonggi Province (Samsung Electronics)
According to news reports, Samsung is planning to curtail its production of memory chips next year to bit growth of less than 20 percent for DRAM and 30 percent for NAND.

Samsung said during a conference call on its third-quarter earnings in November that its annual bit growth for DRAM is estimated to be around 20 percent and 40 percent for NAND.

Bit growth refers to the increased supply of memory chips in bit volume that helps estimate capacities of each chip provider.

Its 30 trillion-won investment plan for construction of a second fabrication line for DRAM at its newest Pyeongtaek campus in Gyeonggi Province could be carried out more carefully than initially planned, as part of Samsung’s strategy to prevent falls in DRAM prices by limiting new growth in supply.

The second Pyeongtaek plant is scheduled to be completed by the end of the first half of next year.

Samsung is also expected to limit increasing its DRAM production on the second floor of the first fabrication line in Pyeongtaek, amid the oversupply outlook.

The Korean chipmaker’s slashed forecasts for fourth-quarter earnings add woes to the negative outlook for 2019.

Local stock brokerages estimate Samsung’s fourth-quarter operating profit to slide to around 13 trillion won from the previous quarter’s record high of 17.57 trillion won, due to weak seasonality of the semiconductor industry at the end of the year.

US-based Micron Technology’s first-quarter earnings announcement for the fiscal year of 2019 that ended on Nov. 31 fueled worries about the upcoming downturn in the chip market.

The market’s third player, after Samsung and SK hynix, reported a 5 percent drop in its revenue quarter-on-quarter, and its CEO announced a cutback in production for the next year.

Market analysts project the memory chip industry to decline for the first six months of 2019 but expect a rebound in the latter half.

“Due to decreased demand for the period between the fourth quarter of 2018 and the first quarter of 2019, memory prices -- especially DRAM prices -- are estimated to drop by around 15 percent,” said Lee Jae-yoon, an analyst at Yuanta Securities. “But since major chip suppliers are planning to cut back their spending, the oversupply situation is expected to improve in the second half of next year.”