A recent series of conciliatory gestures by the US would keep momentum for dialogue with North Korea alive but would not likely lead North Korea to the negotiating table for denuclearization, experts said Sunday.

US Vice President Mike Pence was expected to give a speech on North Korea’s human rights abuses last week, but the plan was scrapped due in part to concerns about angering or alienating the North and further derailing US-North Korea nuclear talks, ABC News reported, citing a source.

Stephen Biegun, the US special representative for North Korea, said Friday that the US will review easing travel restrictions on North Korea to facilitate humanitarian aid to the impoverished country, in an apparent attempt to appease Pyongyang, which is not engaging Washington in working-level and senior-level talks.

Biegun also told reporters in Seoul that the US is willing to move to the next stage of discussions with the North, and to explore “a number of other things” to build trust with the reclusive country.

The US also agreed to sanctions exemptions for inter-Korean projects, including the two Koreas’ groundbreaking ceremony for inter-Korean railway and road connection and their joint recovery of war remains.

Despite Washington’s friendly gestures, however, a deadlock in North Korea-US denuclearization talks are likely to continue, experts say.

“Loosening restrictions on humanitarian aid signals a shift in the US’ position toward taking a flexible approach in negotiations with North Korea to keep alive momentum for dialogue,” said Shin Beom-chul, a research fellow at the Asan Institute for Policy Studies. “The US is sending a positive message that it could discuss any reward except for sanctions relief.”

“But North Korea is unlikely to come to the negotiating table for now, as it appears to be dragging its feet to gain more concessions from the US in the lead-up to the second summit between North Korea and the US.” 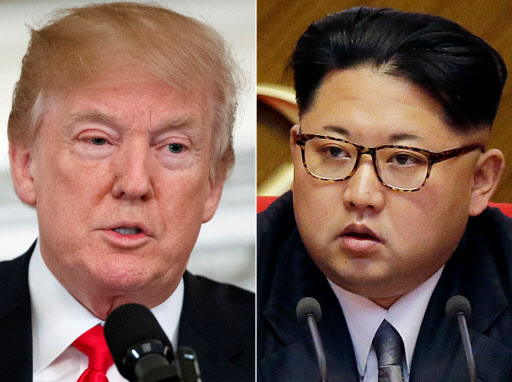 (Yonhap)
Hailing this year’s progress in nuclear diplomacy with the North, US Secretary of State Mike Pompeo said Washington is “counting on” a second summit between US President Donald Trump and North Korean leader Kim Jong-un during an interview with National Public Radio on Thursday.

Before Trump and Kim sit down for another summit, the US appears to want to flesh out details of how denuclearization will proceed in working-level and senior-level talks with North Korea. But the North appears to be avoiding such talks and to prefer top-level negotiations.

“North Koreans think that other problems can be solved only when a fundamental problem is solved,” said Koh Yu-hwan, a professor at Dongguk University. “What the US has offered does not address what North Korea fundamentally wants -- improvement in relations and building trust with the US. It only contributes to forming a mood for dialogue.”

What North Korea “fundamentally” wants is sanctions relief as a sign of mutual trust, he said.

Pompeo and Biegun, however, have reiterated Washington will stick to unilateral and international sanctions against North Korea until it takes more irreversible, verifiable steps toward relinquishing its nuclear arsenal.

North Korea sees no point in engaging the US in working-level and senior-level talks because it thinks such trust-building measures as sanctions relief and an end-of-war declaration require Trump to make a bold decision, Koh said.

On Thursday, North Korea said through its official Korean Central News Agency that lifting sanctions on the communist nation would be a “touchstone” of Washington’s commitment to denuclearization of the Korean Peninsula.

North Korea has been calling for “corresponding measures” by the US in return for all the measures it has already taken, including the dismantling of its major nuclear test site in Punggye-ri and missile engine test site in Tongchang-ri.