[ The Korea Herald – Send E-mail ]
[Herald Interview] 'Forgiveness key for South Korea to advance into the future'
John Linton addresses need to pardon conservative former presidents for country to move on.
By Jo He-rim
Published : Dec 20, 2018 - 17:14
Updated : Dec 21, 2018 - 12:12
John Linton has a list of titles that label him as “the first” in Korea. He was the first foreign national to pass Korea’s exam for medical practitioners in 1987, he was the first to introduce an ambulance vehicle here to treat patients while moving and he was the first to receive dual citizenship as an American and a Korean.

Born to an American missionary family in the Jeolla provinces in South Korea, Linton has witnessed the ups and downs of Korean history and left his mark here and there -- just as three generations of his family have contributed to Korean society. 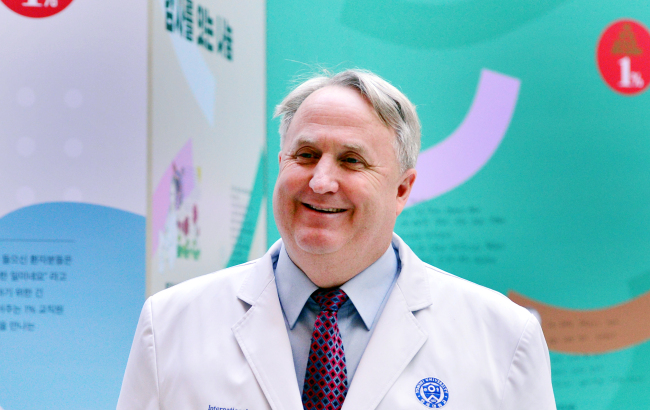 John Linton, director of the International Health Care Center of Yonsei University’s Severance Hospital, poses before an interview on Dec. 7. (Park Hyun-koo/The Korea Herald)
Now, the veteran doctor -- who has also been a vocal backer and activist for humanitarian aid to North Korea -- suggests that Korean society adopt “forgiveness” and an attitude of engagement to advance into the future.

“Korea is wasting so much energy in conflicts, and there’s too much hatred. We need mature leadership, and that is forgiveness,” Linton said in an interview with The Korea Herald on Dec. 7 at the International Health Care Center within Yonsei University’s Severance Hospital.

Describing himself as a country lad from the southern city of Suncheon, Linton spoke in a heavy Jeolla provincial dialect with a big smile, revealing his avuncular personality. But he was also not afraid to make his voice heard on what he believed in, even on issues deemed sensitive.

Linton, also known by his Korean name Ihn Yo-han, was born in Jeonju, North Jeolla Province, in 1959 and brought up in Suncheon, South Jeolla Province. He said his childhood was just like that of any other Korean kid, jumping over the walls of the village and sleeping in friends’ bunks.

“I grew up in Baekok district in Suncheon. The province was very poor (at the time). I lived in a missionary compound. There was no foreigner in my age, but there was no racism, and I probably spoke Korean before English,” Linton said, switching between Korean and English. “Basically, I grew up as a hillbilly of Jeolla Province.”

His family’s ties with Korea date back to 1895, when his great grandfather Eugene Bell came here as a Southern Presbyterian missionary. In those remote times, Rev. Bell established a number of churches and educational institutes. Linton’s grandfather William Linton upheld the legacy to pursue evangelical duties in the Jeolla provinces.

Carrying on that family history, Linton also played his role in some of the most turbulent times here -- like the Forrest Gump of Korea, as one TV show host here labeled him.

When the Gwangju Democratic Uprising occurred in May 1980, Linton, a first-year medical student at Yonsei University, could not help but visit the scene to witness the military junta’s brutal crackdown on civilians.

There, he translated for foreign reporters. Within two weeks, he was summoned to the US Embassy to receive a letter from the Korean government that referred to him as one of the instigators of the “riot” in Gwangju.

“They watched me for two years throughout my premed, and I even volunteered for a 10-day military training program to prove that I was not a communist,” Linton said.

Linton said he has received three gifts from the Korean people. He was accepted into Yonsei University’s medical school as part of a special program for foreigners and he became the youngest director of the hospital’s International Health Care Center in 1991. He was also the first adult to be granted Korean citizenship for his contributions here in 2012.

His first act of paying forward the good things he had received was to introduce, in 1992, the first ambulance model that made emergency medical care possible while transferring patients, he said.

“There were ambulances back then. But it was just a car that could carry the patient lying down. No resuscitation, no medical equipment for prehospital cares -- it was like a taxi,” Linton explained.

“My father passed away in the taxi-like ambulance in 1984, after he was hit by a drunk bus driver. He was on his way to a bigger hospital in Gwangju,”

In 1993, he also trained the country’s first paramedic prehospital care team of 58 doctors, in Suncheon. He made an enhanced model in 1995.

His second payback was to start his work to fight tuberculosis in North Korea in 1997. Visiting the communist state 29 times, John Linton traveled across its cities and countryside to treat tens of thousands of patients, alongside his older brother Steve Linton.

Focusing on the contagious disease, Linton stressed the importance of providing medical support to the North, saying its prohibition breaks United Nations mandates.

“Most public health expenditures will be on TB (when the two Koreas reunify). And the serious part is the multidrug-resistant TB,” he said.

“Humanitarian aid and politics cannot be mixed. And no matter how unhappy people are with the North Korean government, the people should not suffer,” he said.

Linton headed the Korea Foundation for International Health Care for three years until September this year, but his last visit to the North was three years ago under the Park Geun-hye administration, which forbade exchanges with the North. He said he would like to travel to North Korea again in the spring. 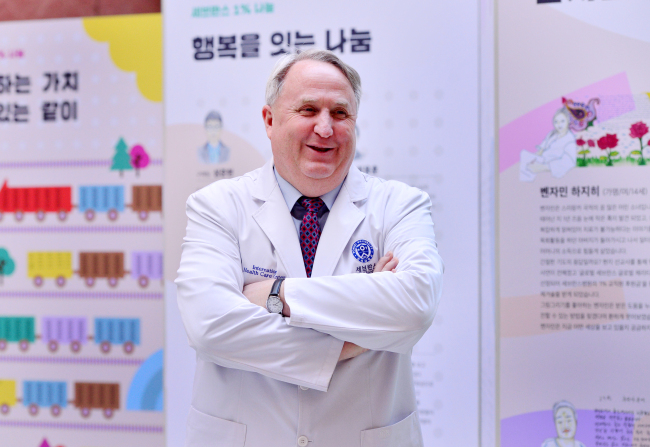 John Linton, director of the International Health Care Center of Yonsei University’s Severance Hospital, poses before an interview on Dec. 7. (Park Hyun-koo/The Korea Herald)
While he was a doctor for longer than any other job, his political orientation was often questioned in a country with divisive politics. He was a native from the traditional stronghold of liberals, the Jeolla provinces, but he would also serve rival conservative administrations. “What disturbs me in Korea is that there’s tremendous polarization in politics,” Linton said.

In 2012, President-elect Park chose Linton as one of the vice chairmen on her transition committee, to mainly focus on unity. He has often been criticized by liberals for joining the conservative faction.

“They stressed the importance of reducing regional conflicts and supporting the multicultural families. I also thought it was important to inform the conservative party of the reality of North Korea,” he said.

Recalling the time he spoke to President Kim Dae-jung in 1994, he said the future of Korean society lies in forgiveness and reconciliation.

Kim was a left-leaning president who faced difficult times under the military juntas of Chun Doo-hwan and Roh Tae-woo in the 1980s, even receiving a death sentence. Kim, however, invited the two to his presidential inauguration in 1998 and even pardoned them during his term in office.

“Kim is one of the greatest men I admire. He was a mature leader who knew what is important, forgave and moved on,” he said. “Before he became the president, I asked him why he would not seek revenge. Asking back what revenge does, he gave me a 30-minute lecture on (Nelson) Mandela and the uselessness of revenge.”

Leading from that, Linton made clear that the two last conservative presidents, Park and Lee Myung-bak, should be released immediately. The two are currently standing trial separately and have been sentenced to prison over various forms of corruption.

“I am not a big fan of Lee. But they are former presidents and they should be released. What would that serve the future of Korea?” he said. “Forgiveness and reconciliation should begin not with North Korea, but inside South Korea.”

Another great man Linton admires is Rev. Son Yang-won, a Christian leader who not only forgave the murderer of his two oldest sons, but also adopted him as his own son.

“One thing I do not agree with Confucianism is that it encourages paying back the debts of, or to take revenge for, your parents,” Linton said. “But we cannot go tit for tat, tooth for tooth and eye for eye. We have got to stop that, stop here.”

Over the thawing atmosphere with North Korea, Linton praised President Moon Jae-in as courageous to engage with the North. There, he emphasized that it is not “embracement,” as Korean media often translates, but that it is “engagement.”

He said his biggest concern on reunification is social integration, seeing from his visits to the North.

“The average North Koreans are terrified of reunification. To them, capitalism is decadent. And while South Korea is very powerful and rich, the people in the North are worried about what is going to happen to their social statuses. And we need to crush this,” Linton explained.

To that end, he said, Korea should improve its treatment of Chinese people of Korean descent, or Joseon-jok.

“A lot of them here take the difficult, dangerous and dirty tasks for us, and often we treat them horribly. We should give them the national medical insurance and work permits -- so they are legal in South Korea,” Linton explained, adding that he had also delivered the message to former President Roh Moo-hyun, who promoted friendly policies in approaching the North.

Many Korean-Chinese have relatives in North Korea, and it is important that stories of mistreatment are not spread in misleading ways, he added.

Pointing to a discriminatory sentiment against differences here, Linton also said that hope lies in the countryside, where about 22 percent of men in the farming and fishery industries marry foreigners.

“We always ask North Korea to change. But no, we have to change too. And we have to engage them, not embrace them.”