[ The Korea Herald – Send E-mail ]
SeMA holds retrospective of abstract artist Han Mook
By Shim Woo-hyun
Published : Dec 13, 2018 - 17:06
Updated : Dec 13, 2018 - 17:06
A 1994 documentary shows Han Mook starting his morning with a baguette on a small sofa in his small, shabby Paris apartment. Soon he gets dressed, walks out of the room and goes down a spiral stiarcase to his atelier where the late artist spent most of his time. 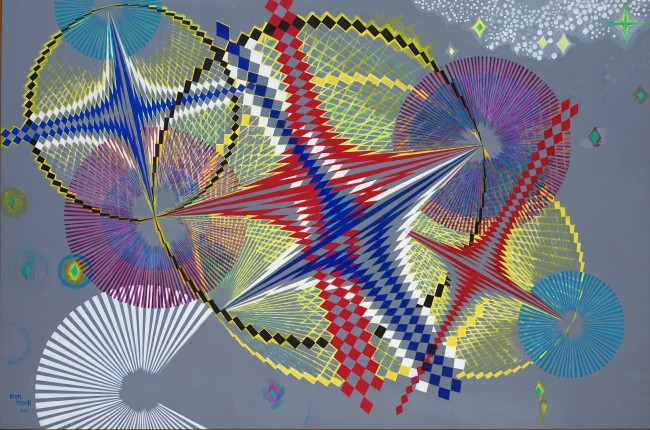 Han Mook’s 1989 work “Symphony of the Southern Cross” (SeMA)
“Han Mook For Another Poetry-Order,” a retrospective of the artist at the Seoul Museum of Art, comprises some 130 pieces, including his major works, drawings and calligraphy. The 1994 documentary, including interviews with the artist, is also part of the exhibition.

“We lived like students in Paris,” the artist’s widow Lee Chung-seok said at a press conference at the museum Tuesday, recalling the time when the two lived in a small, worn out apartment. The artist had some collectors who regularly bought his works when the artist visited Korea for solo exhibitions held every 10 years at Gallery Hyundai. “We just got by with that money, which was not a lot” Lee added.

The late artist did not like the idea of selling his works, and it was the major reason he did not hold many exhibitions. “Coming to Paris to draw portraits at Montmartre was not my idea,” Han also said in the documentary.

Han was a perfectionist and a stubborn artist. Han was very “strict” about his art. 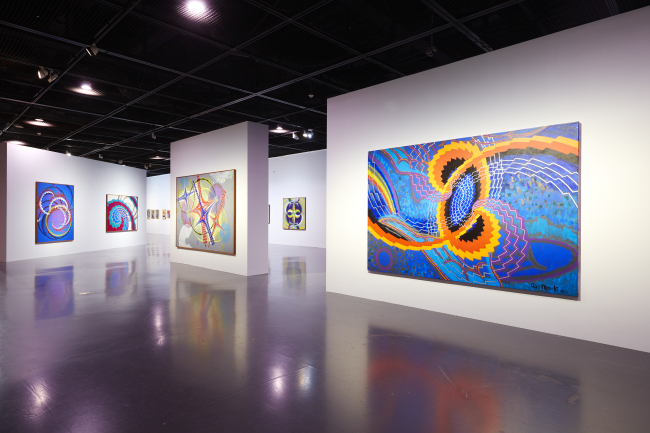 An installation view of the Seoul Museum of Art’s exhibition “Han Mook For Another Poetry-Order“ (SeMA)
“He believed that artworks should be able to speak for themselves and also about the artist. He never allowed others to touch his works and had to do everything on his own,” Lee added.

Born in 1914, Han built his artistic career first in Korea, after graduating Kawabata Art School in Tokyo in 1940.

In the 1950s and 1960s, Han began to focus on abstract and figurative art. In 1957, he formed a group called Modern Art together with other Korean art pioneers -- such as Yoo Young-kuk -- and led the modern art movement here. During the period, Han is also known to have maintained close ties with artists Lee U-fan and Lee Jung-seob, as well as architect Kim Swoo-geun.

Han, however, suddenly moved to Paris in 1960, where his seminal works, characterized by geometric and futuristic composition, were created.

“His later works are based on the artist’s anticipation of the world that was newly approaching his generation and the next. It was a ‘poetic order’ he foresaw within the future, one that was marked by the Apollo 11 moon landing in 1969,” the museum said.

Henceforth, Han focused on bringing the outer space onto his canvas, using geometric patterns and vivid colors to create a sense of movement within.

In 2013, Han was named artist of the year by the National Museum of Modern and Contemporary Art. He passed away three years later, saying on this deathbed, “Here I go, with a smile and a brush,” according to his wife.