[ The Korea Herald – Send E-mail ]
Floor leader of ruling party supports lowering of voting age
By Claire Lee
Published : Nov 14, 2018 - 15:57
Updated : Nov 14, 2018 - 16:02
Rep. Hong Young-pyo, the floor leader of the ruling Democratic Party, said at a meeting with youth activists Wednesday that he will make efforts to lower the voting age to 18 from the current 19.

During the meeting, the lawmaker stressed that Korea is currently the only country in the Organization for Economic Cooperation and Development where the voting age is 19.

“The current administration, as well as the ruling party, understand that it is necessary that the voting age be lowered to 18,” he said. 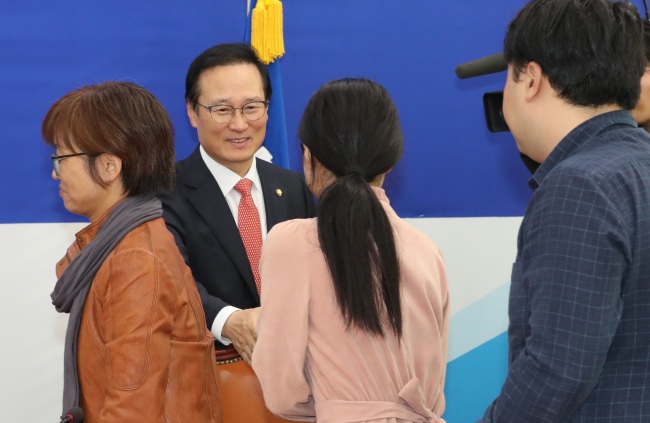 “The current laws -- as well as the voting age -- limit the basic rights of teenagers that are guaranteed by the Constitution.”

Within the National Assembly, the main opposition Liberty Korea Party is the only party that is against the proposal to lower the voting age. The party maintains that it is “concerned” about the “politicization of schools,” suggesting that the first and foremost responsibility of teenagers is to focus on their studies.

“We will try our best to persuade the Liberty Korea Party,” Rep. Hong said.

Youth rights activists point out that not all 18-year-olds in Korea are in school. Also, at age 18, Koreans are legally allowed to marry and work for the government.

The activists also say the nation’s current voting age and the exclusion of minors from politics are intertwined with the harsh, hypercompetitive environment that students are often forced to endure. Korea has the highest teenage suicide rate among the OECD nations.