A video clip of a man throwing food at a fast-food drive-thru employee in Ulsan has gone viral after being shared Sunday on Bobae Dream, a South Korean internet community for car lovers.

The video has triggered public fury against the man for abusing his power against the McDonald’s employee, an act locally known as gapjil, by using his status as a customer. The video has exceeded over 120,000 views on Bobae Dream as of Tuesday. 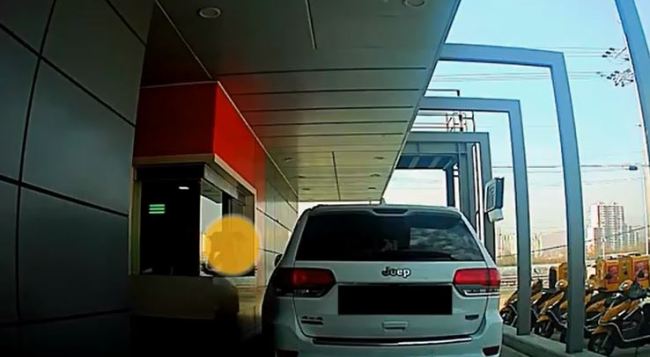 (YouTube)
In the 26-second video shot by a drive-thru customer waiting in line behind the abusive customer, a man in a Jeep SUV receives the food he ordered and talks to the employee for a few seconds. He then suddenly throws the food at the employee and quickly drives off.

The drive-thru customer who shot the video, surnamed Lee, said he and his wife were shocked by the incident, and when they drove up to the window, the employee was crying.

Lee reportedly believes the incident took place after the man received the wrong food items. He also reportedly revisited the burger joint to hand over a USB with the original dashcam footage of the incident and the video clip shared on Bobae Dream.