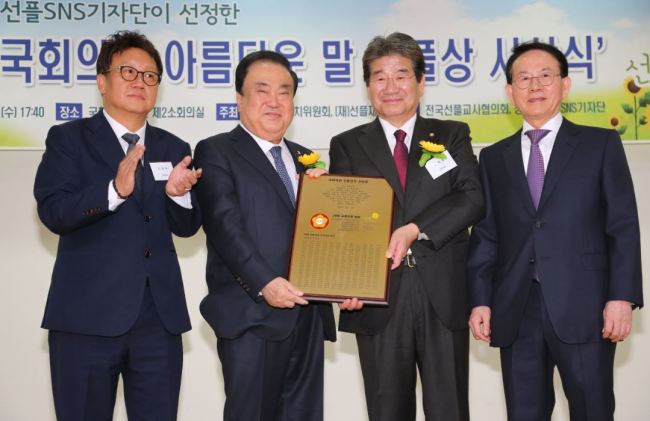 The Sunfull Plaque of the 20th National Assembly is delivered to the speaker of the house on Wednesday. From left: Assemblyman Min Byung-doo, Speaker Moon Hee-sang, Assemblyman Kang Seok-ho, Sunfull Foundation Chairman Min Byoung-chul. (Sunfull Foundation)
The Sunfull SNS Youth Monitors -- a group consisting of 297 national high school and university students -- delivered award plaques to the 26 awardees. The awardees were picked through a selective process after close monitoring and analysis of their speeches recorded in the official National Assembly meeting log. 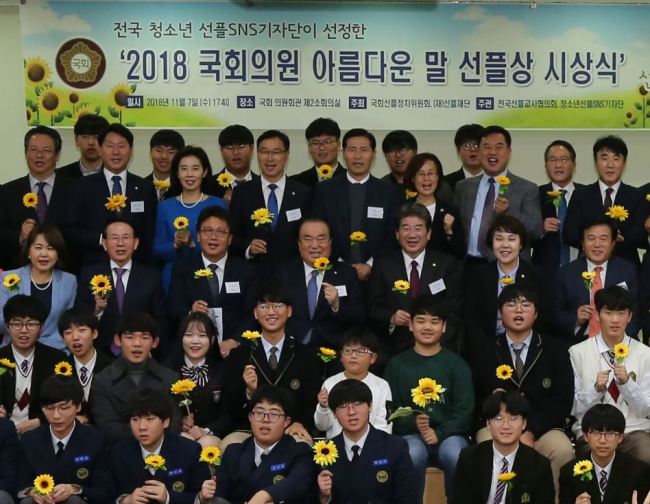 2018 Sunfull National Assembly awards ceremony (Sunfull Foundation)
“If we all use words of encouragement and support in our daily lives, our society will be overflowing with positivity, which can reduce a substantial amount of social conflict costs,” said Assemblyman Min Byung-doo.

In a bid to spread positive energy and reduce social conflicts, 47 members of the National Assembly, including Shim Jae-kwon, Shin Sang-jin and You-Sung-yop, proposed an amendment to the Act on the Promotion of Information Network and Information Protection on Feb. 10, 2017.

The proposal would designate a “Sunfull Day” in order to promote healthy internet communities and is currently waiting to be examined by the assembly’s Science, ICT, Broadcasting and Communications Committee.