“South and North Korea have agreed to launch a demonstration project this year, where (the two counties) will be sharing information on infectious diseases,” the joint statement said. 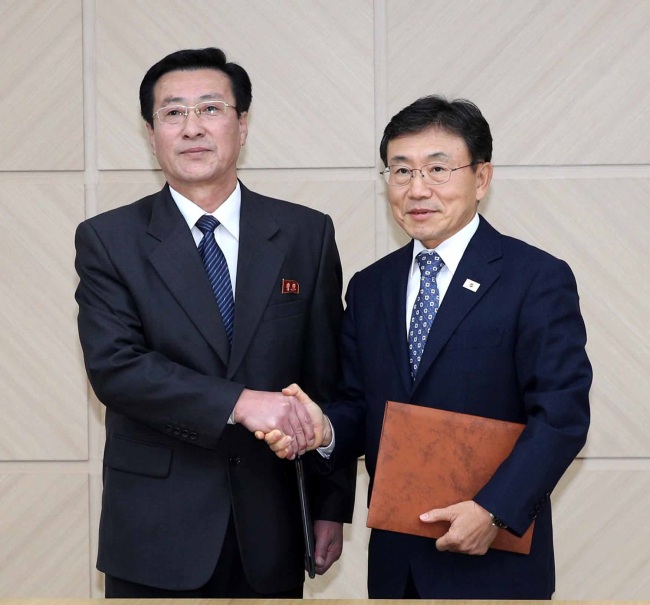 Kwon Deok-cheol (right), South Korea’s Vice Health Minister, and his North Korean counterpart, Park Myong-su, pose for a photo after reaching an agreement during an inter-Korean meeting held in the North’s border town of Kaesong, Wednesday. (Yonhap)
“We have agreed to come up with necessary plans, on things such as cooperation on technology and establishing a joint infectious disease control scheme.”

The two Koreas also agreed to collaborate on diagnosis, prevention and treatment of infectious diseases in both countries, including TB and malaria.

It has been reported that North Koreans are susceptible to a wide range of infectious diseases that have mostly been eradicated in developed countries.

“North and South Koreas are actually very close in distance, and virus-carrying insects and mosquitos can always spread (across the border),” said Kwon.

Park agreed that, from an epidemiological perspective, the two Koreas are so close that an outbreak in one country could affect the other.

Wednesday’s meeting in Kaesong was the first inter-Korean discussion on health care policies in 11 years. Seoul and Pyongyang last held similar talks in 2007.

According to the World Health Organization, North Korea spent less on health care per capita than any other country in 2009 -- under $1.

Citing witnesses who dispute the communist state’s claims to provide health care for all, Amnesty International says North Koreans have had to pay for medical services since the 1990s, with the doctors “usually paid in cigarettes, alcohol or food for most basic consults, and taking cash for tests or surgery.”

The international NGO also says many North Koreans “bypass doctors altogether, going straight to the markets to buy medicine, self-medicating according to their guesswork” because the state has “failed to offer the most basic health needs.”

In June, the Global Fund to Fight AIDS, Tuberculosis, and Malaria suspended grants to combat TB and malaria in North Korea for unclear reasons.

Seoul and Pyongyang have been holding a number of meetings on prospective inter-Korean projects and cooperation, including those involving railway connections, reforestation and health care, with the goal of easing tensions between the two countries.