[ The Korea Herald – Send E-mail ]
Seoul acknowledges state sexual violence against women during Gwangju Uprising
By Claire Lee
Published : Oct 31, 2018 - 10:14
Updated : Oct 31, 2018 - 17:10
The South Korean government on Wednesday acknowledged for the first time the rape and sexual torture of women by the military during the crackdown on pro-democracy uprising in Gwangju in May 1980.

The joint heads of the government investigation team apologized for more than 17 cases of sexual violence that were committed by soldiers during the bloody military crackdown on the pro-democracy demonstrators.

The apology came alongside the announcement of the results of the investigation, jointly conducted by the Ministry of Gender Equality, the National Human Rights Commission of Korea and the Ministry of National Defense. It was launched in June as part of the Moon Jae-in administration’s efforts to uncover human rights violations suffered by Gwangju residents during the 1980 Gwangju uprising -- also dubbed the “Gwangju Massacre.”

“The joint investigation team wants to express its consolation and apologies not only to those who courageously reported their cases but also to all victims who live in pain as a result of the trauma that was inflicted on them 38 years ago and never adequately treated,” said Lee Sook-jin, the vice minister of MOGEF who co-headed the joint investigation team, in a statement. 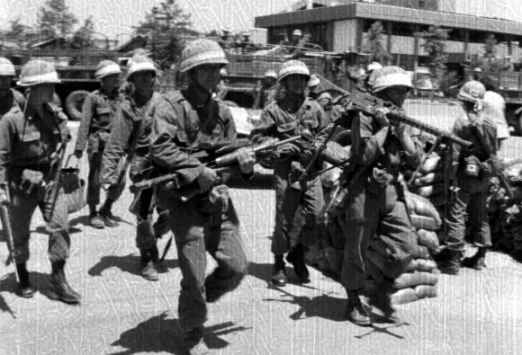 (Yonhap)
The team confirmed a total of 17 cases of sexual violence during the uprising. Victims included students, housewives and teenagers and even pregnant women.

Hundreds and possibly thousands are believed to have been killed when Gwangju residents rose up against the military government led by President Chun Doo-hwan in May 18, 1980. Photographs and testimonies say the Gwangju protesters were crushed, bludgeoned, stabbed and shot by martial law troops from May 18-27 that year.

It is the first time that the Korean government has officially acknowledged that sexual crimes also took place during the military crackdown.

According to the investigation team, most cases of sexual violence took place in central Gwangju during early days of the uprising, from May 19-21, before the civilian militia was organized. Most of the victims who spoke to the investigation team said they were sexually assaulted by two or more soldiers in uniform on the same occasion, who threatened to shoot them.

“It was also found that a number of human rights violations, including sexual assault, were committed against ordinary citizens, such as students and pregnant women who did not participate in the demonstrations,” the MOGEF said in a statement.

The team also confirmed two cases of sexual torture at the Sangmudae, a military camp in Gwangju.

Witnesses also told the investigation team that they had seen bodies of women whose breasts and genitals had been mutilated. Other witnesses also said they saw high school girls being forcibly taken away in a military truck during the uprising.

The investigation team said many of the victims still suffer from the trauma, 38 years after the brutal crackdown.

“My life virtually ended at age 20 (the year I was sexually assaulted),” said one victim during an interview with the investigators. “I could not tell anyone, including my family.”

One victim told investigators that she still feels nauseous whenever she sees military uniforms.

“This investigation has historical significance as the first state-level investigation to discover and confirm the facts about acts of human rights violations against women during the Gwangju Uprising,” said Gender Equality Vice Minister Lee Sook-jin.

The government investigation was prompted by a testimony made by a 60-year-old Gwangju resident in May, as part of the #MeToo movement. She said that she was arrested and then tortured for being involved in the May 18 anti-government movement, and then raped by a military officer in September 1980.

Kim Seon-ock, who was a university student majoring in music at the time, said she could not resist the sexual assault as she had been brutally tortured for more than 60 days. She was released the day after she was raped, but has suffered from the trauma ever since, Kim said. She attempted suicide and never told anyone about the sexual assault before making her testimony.

“I still can’t sleep properly. It’s still very hard for me to form relationships with people,” she said during an interview with a local daily the same month. “My life is stuck in 1980. I still can’t watch movies that feature soldiers.”