[ The Korea Herald – Send E-mail ]
Will Seoul partially scrap its free Seoul subway rides program for elderly?
By Claire Lee
Published : Oct 30, 2018 - 17:55
Updated : Oct 30, 2018 - 17:56
Finance Minister Kim Dong-yeon on Monday said it is “appropriate” for the central government to consider partially abolishing the program for free subway rides for the elderly in the Seoul metropolitan area, which costs the Seoul subway operators billions of won in losses every year.

As the senior population -- those aged 65 or older -- accounts for 14.3 percent of the entire population now, and is only expected to rise, many politicians have shied away from tackling the sensitive issue, fearing it would cost them a significant number of votes. 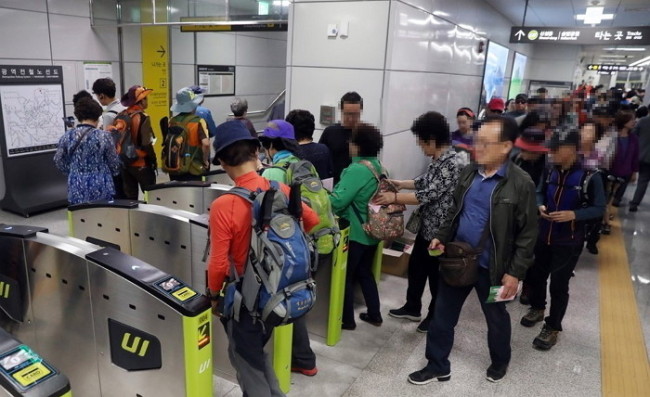 Elderly Koreans at a Seoul Metro station. (Yonhap)
Finance Minister Kim’s comments come after Seoul Mayor Park Won-soon said last week that a “drastic decision” must be made by the central government, as a significant portion of Seoul Metro’s deficit results from the free rides for the elderly every year.

Abolishing the initiative, first launched in 1984, is expected to lead to serious backlash from the senior population.

Under a welfare initiative that has long been controversial, all subway rides in and around Seoul are free for Korean citizens aged 65 or older. According to the Seoul Metropolitan Council, losses incurred by the free rides for seniors amounted to 275.7 billion won ($241.9 million) in 2016, up from 200 billion won in 2012.

Last year, the city predicted that annual losses from the program would reach 1 trillion won by 2040, for a cumulative total loss of 14.66 trillion won. In 2016, lost revenue from the free rides for the elderly made up 71. 6 percent of the Seoul Metro’s total net losses, a significant increase from 54.1 percent back 2012.

Finance Minister Kim said it would be “appropriate” to consider a plan to give free rides to those aged 70 or older, instead of the current 65 or older. “If this happens, however, (the government) will have to think of ways to do this slowly,” he said during the parliamentary inspection session of the Finance Ministry.

“(The government) will have to come up with a plan to make sure that the senior citizens still feel that they are getting enough welfare service.”

The city has been calling for alternative ways to reduce losses stemming from the welfare initiative for the elderly, including making them pay for Seoul Metro during rush hour periods, among other measures.

A proposal to revise the Urban Rail Road Act, which makes the central government responsible for the deficits caused by the free rides program for the elderly, is currently pending at the National Assembly. Those who oppose the proposal say it is not fair to support the elderly in Seoul with the tax money paid by non-Seoul residents.