The conference is a biannual global anti-corruption event co-hosted by the host country and Transparency International, a Berlin-based international nongovernmental organization devoted to combating global corruption. Each event brings together some 2,000 high-ranking government officials and representatives of NGOs and international organizations from 140 countries.

“It is profoundly meaningful that the 19th edition of the IACC will be held in Korea, whose government and civil society overcame political crisis together and are now closely cooperating to build a transparent society,” said Kim Tae-eung, the standing commissioner of Korea’s ACRC, during the closing ceremony of the 18th IACC in Copenhagen, Denmark, Thursday. 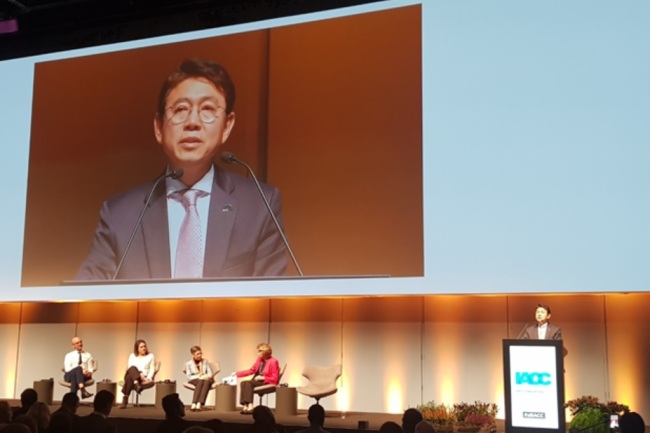 Kim Tae-eung, the standing commissioner of Korea’s ACRC, gives a speech during the closing ceremony of the 18th IACC in Copenhagen, Denmark, Thursday. (Anti-Corruption and Civil Rights Commission)
The ACRC has been working closely with the global community to launch the upcoming event in Seoul as part of its efforts to tackle corruption in the country.

South Korea ranked as the 51st-least corrupt nation out of 180 countries last year, according to the 2017 Corruption Perceptions Index published by Transparency International.

Among the 35 member countries in the Organization for Economic Cooperation and Development, Korea remained close to the bottom at No. 29. Considering Korea is the 11th-largest economy in the world, its CPI result is “shameful,” according to Lee Sang-hak, a board member at Transparency International-Korea.

The current Moon Jae-in administration has established a special anti-corruption panel of civil servants, scholars, journalists and representatives of NGOs to discuss ways to eradicate corruption in both the public and private sectors.

The country’s Improper Solicitation and Graft Act also came into effect in September 2016, putting limits on the monetary value of gifts that can be given to people who work in certain professions, including civil servants and journalists.

The upcoming IACC will be a valuable opportunity for both the participants and the Korean people to learn about the importance of anti-corruption measures and ways to prevent criminal activities arising from corruption, according to the ACRC of Korea.

“A number of studies have shown that the more transparent our society becomes, the more foreign investment will flow into our country,” said an ACRC official.

With the ongoing efforts, the Korean government aims to rank between Nos. 20 and 29 in the Corruption Perceptions Index maintained by Transparency International in the near future.

A study by Seoul National University has predicted South Korea’s gross domestic product will increase by some 8.7 trillion won ($7.64 billion) if the country places at a CPI 10 ranks higher than its current position.