On Thursday, Education Minister Yoo Eun-hae announced the ministry will open the results of past inspections conducted on private kindergartens across the nation from 2013 to 2017 and also reveal the names of institutes found to have committed accounting fraud. The results will become available on Thursday via the ministry website. 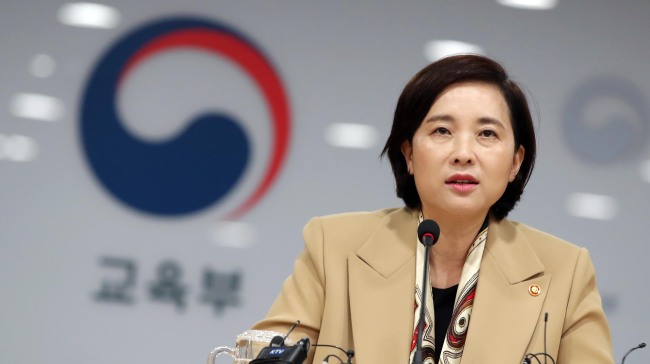 Education Minister Yoo Eun-hae (Yonhap)
The irregularities were first brought up by Rep. Park Yong-jin of the Democratic Party of Korea early this month. During an interpellation session at the National Assembly, Rep. Park revealed that 5,951 financial irregularities occurred at 1,878 private kindergartens from 2014 to 2017.

In one case, the principal of a private kindergarten in Gyeonggi Province was sacked in January for spending tuition fees on private purposes, such as buying a designer bag and paying for hotels and adult goods.

The principal issued an open apology to parents in tears Wednesday, saying she will repent until the day she dies.

The Korea Kindergarten Association lashed out at the ministry’s decision Friday, claiming that releasing the names of kindergartens would be unfair.

“There have been cases in which the inspection results turned out to be wrong, and the concerned kindergartens were not punished or received an acquittal from the court,” the group said in a statement.

Citing fairness, the association also said the ministry should open the inspection results of all elementary, middle and high schools in the country.

Since the revelation, the government has received petitions from thousands demanding an inspection system to oversee the private kindergartens. While they are private bodies, they receive state subsidies and the government has the responsibility to monitor how that money is used, the petitioners said.

People have also called for the government to create more public kindergartens.