Former President Lee Myung-bak was sentenced to 15 years in prison on Friday, over a series of corruption charges including abuse of power and embezzlement.

“As a president who was given great authority from the people, he had the responsibility to use his power according to the Constitution and for the people,” the court said.

“But from the trials we found that Lee had embezzled some 24.6 billion won via DAS over a long period of time. Considering that he was serving as a lawmaker and Seoul mayor during the period, his misconduct should be taken seriously.”

The court also said it was not appropriate for Lee to continue denying his charges, as concrete evidence was found to back the allegations. Lee had been pushing liability to his aides and subordinates, saying they committed the crimes for their own benefit and are slandering him.

Lee was in office from 2008 to 2013. He was indicted in April over 16 charges, including bribery and embezzlement.

The sentencing hearing was televised live, as the court had granted approval Tuesday, citing that it was in consideration of public interest and that people had the right to know.

But Lee was not present at the hearing. He claimed that poor health conditions prevented him from doing so. 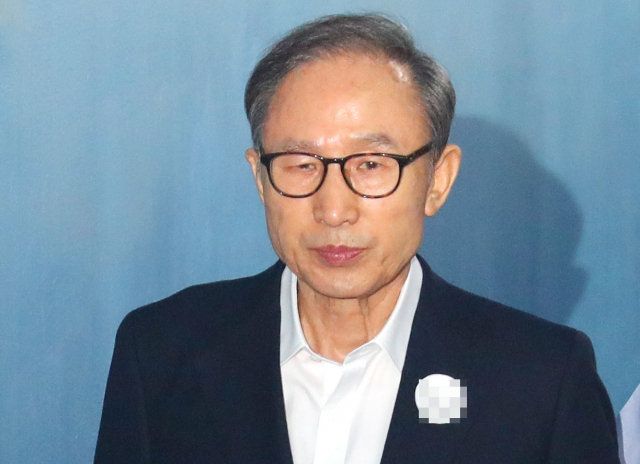 Regarding the long-disputed ownership of the controversial DAS, an auto parts maker, the court concluded that Lee is the actual owner and that he had ordered his aides to amass slush funds. The auto parts manufacturer is owned by Lee’s eldest brother Lee Sang-eun on paper. However, the prosecution had suspected the former president used DAS to amass slush funds totaling some 34.9 billion won from 1994 to 2006.

The court, however, found Lee guilty of amassing slush funds worth 24 billion won.

Lee has been denying the allegations, saying he does not own any shares of the auto parts company. In his final statement on Sept. 6, he said the house he lives in is the only asset he has.

Lee was accused of receiving about 11.1 billion won in bribes from the state spy agency, individuals and businesses. The prosecutors suspected the bribes included $5 million in litigation fees that Samsung allegedly paid on behalf of the auto parts maker between 2007 and 2009, as a kickback to the former president in return for the pardoning of Samsung’s former Chairman Lee Kun-hee.

The court confirmed that the former president received the kickback from Samsung. Other convictions include the abuse of power and violation of the election law.

The court, however dismissed the prosecution’s charge that Lee violated the act on the management of presidential archives. Lee was suspected of hiding some presidential documents regarding DAS, when his presidential term ended.

Lee has been detained since March 23 at the Seoul Dongbu Detention Center.

The Seoul court granted the arrest warrant, citing concerns over destruction of evidence. Cho is the first among top police chiefs to be arrested during a police investigation and to be detained in the police station.