The 29-year-old, who lived in Seoul from 2009-2010, said the distinctive smell on the streets often made her sick.

“I would cover my nose and run away from (the smell) as far as possible. I would literally run,” she told The Korea Herald.

“Being constantly exposed to it was definitely not right. I was shocked that this was the reaction I was getting -- feeling physically sick -- and yet people were just living with it.” 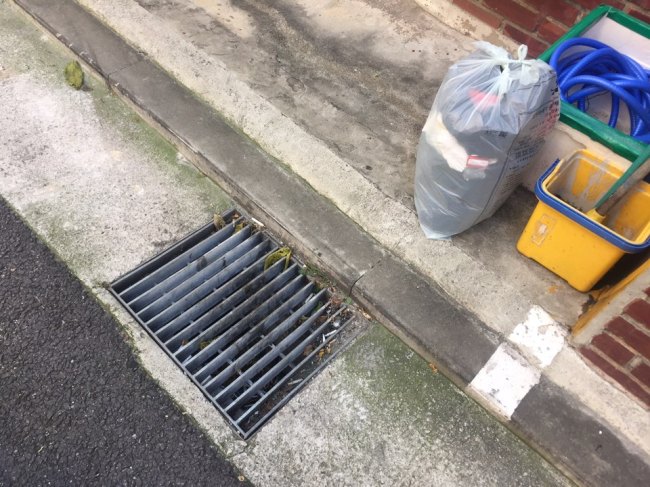 A street sewer in Huam-dong, Seoul. (Claire Lee/ The Korea Herald)
Choi, however, is not alone in finding the particular problem to be almost unbearable. Odor pollution is increasingly becoming a public concern in South Korea, where, in spite of a 2005 law, the number of malodor-related complaints surged 21-fold from 2005-2016.

Some 25,000 Koreans filed such complaints to the government in 2016 alone, with the largest proportion concerning unpleasant smells from food waste or smoke outside restaurants, as well as sewage.

“First, we have to acknowledge odor as a serious environmental pollution issue,” Kim Myung-ja, president of the Korean Federation of Science and Technology Societies, said in a recent public debate.

“If we do not actively tackle this issue, the quality of life of the general public may be severely jeopardized.”


According to a study by Ryu Hee-wook, a Soongsil University professor, almost 30 percent of people who filed odor-related complaints in 2016 complained about sewage odors.

The particular malodor has been linked to the country’s sewage system. As of 2016, more than 80 percent of all properties in Seoul -- including residential buildings -- use septic tanks, or small-scale sewage systems that treat and dispose household wastewater on site.

This makes almost all Korean streets with sewers, kitchens and bathrooms vulnerable to the sewage odor that smells like rotten eggs and ammonia, among other things. The malodor worsens in summer months when wastewater odors rise with the temperature.

In North America, only about 25 percent of the population relies on septic tanks, mostly in rural areas lacking connection to public sewage pipes.

Experts say hydrogen sulfide, an odor-causing gas that results naturally from septic conditions during the collection and treatment of wastewater, is only slightly soluble and therefore easily released into the atmosphere.

“This summer has been especially brutal,” said Kim So-hye, a mother of two in western Seoul.

“The weather itself was already almost unbearable. The worst days were when food waste was out on the street for collection. Combined with the sewer odor and the scorching heat, it often made me want to throw up.”

According to the Korean Federation of Science and Technology Societies, exposure to hydrogen sulfide, even at a low concentration in the air, can cause a number of health conditions, including headaches, eye irritation and fatigue. 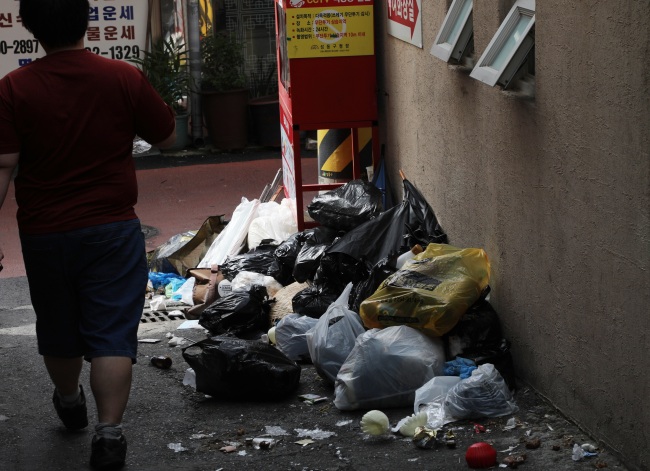 Trash is piled up in the street near an outdoor market in Seoul on Sept. 26, the last day of the Chuseok holidays. (Yonhap)
“The government has been making a number of efforts to tackle this problem, including supplying odor control devices and installing sensors on septic tanks so that when the malodor becomes especially intense, it will inform those in charge,” said Cho Jeong-il, a senior researcher at the Environmental and Plant Engineering Research Institute.

“But many scientists are coming to a conclusion that unless Korea changes the entire sewage system by getting rid of on-site septic tanks, the core of the sewage odor problem will not be solved.”

South Korea adopted its current sewer system from Japan during the colonial era in the 1920s. In 2005, the country enacted the Malodor Prevention Act, which requires large businesses, including food waste facilities, to install odor-control devices.


Earlier this year, a man who owns a fried chicken eatery in Incheon filed a report to police after receiving death threats from a neighbor upset with the strong smell of the fried food.

While the case is an extreme one, statistics show a growing number of Koreans are suffering because of malodor coming from restaurants -- especially those that serve barbecued meat.

According to professor Ryu’s study, the largest proportion of all malodor-related complaints filed in 2016, an overwhelming 39 percent, had to do with unpleasant smells from restaurants. Ryu said a significant number of those restaurants were barbecue establishments.

As of 2016, 42 percent of all restaurants in South Korea serve Korean barbecue, providing customers with portable stoves at their tables.

“Those who have not experienced it don’t really understand why the smell of barbecue would be considered malodor,” said professor Song Ji-hyeon, who teaches at the civil and environmental engineering college at Sejong University in Seoul.

“But you don’t want to smell the smoke of barbecue when you are reading or trying to relax at home. It only smells good when you are about to eat it. People who suffer from this particular malodor are those who live near barbecue restaurants, which exposes them to the smoke even when they are inside their own houses.”

Lee Ah-young, a professional woman in her 30s, said she is annoyed by the barbecue smoke odor emanating from a grilled tripe restaurant near her house in Hongji-dong, Seoul.

“I can’t open my windows at home after work because of the smoke odor, even though I want to enjoy the fall breeze,” she told The Korea Herald.

“It’s very unpleasant. You expect to enjoy a breath of fresh air when you open your window, not the smell of grilled tripe and smoke. I’ve complained to the Seoul Metropolitan Government a number of times, but the city officials simply gave verbal warnings to the restaurant. The odor is still there.”

Professor Song said Korea needs to consider making it mandatory for all restaurants to install smoke and odor control devices, and for those that cannot afford the technology the government should provide support.

A 2015 report by the Seoul Metropolitan Government showed that residents in low-income neighborhoods are especially vulnerable to odor pollution, as they often suffer from “defective and obsolete drainage pipes, malfunctioning bathrooms and illegally dumped trash.”

“I think the new measures should be focused on the needs of those who are affected by the smoke and malodor, not the owner of the restaurants and businesses,” Professor Song said.

“Their needs need to form the basis of future odor-prevention and control measures."