[ The Korea Herald – Send E-mail ]
[Video] Chaebol chiefs in Pyongyang show hope for future business opportunities
Samsung heir Lee Jae-yong holds last-minute meeting with CEOs to discuss conglomerate’s possible plans for North Korea in the future
By Song Su-hyun
Published : Sep 18, 2018 - 21:20
Updated : Oct 11, 2018 - 17:32
An unusual sight played out Tuesday as some of the most powerful business leaders from South Korea shook hands with the North Korean economy chief and officials as they walked into a room at the People’s Culture Palace in Pyongyang.

On the sidelines of the third summit between South Korean President Moon Jae-in and North Korean leader Kim Jong-un in the first visit to Pyongyang in 11 years, what captured the business world’s attention throughout the day was the encounter between North Korean Deputy Prime Minister for Economy Ri Ryong-nam and 17 business moguls from Seoul.

During the meeting, the industry leaders had time to introduce themselves and their businesses to the deputy prime minister for economy of North Korea.

Samsung Electronics heir Lee Jae-yong highlighted his hope to learn more about the North and start building a trusting relationship with Pyongyang in his introduction.

“Samsung’s business philosophy is commitment to technology and talents similar to what I coincidentally read on the wall of a new building across from Pyongyang Station -- ‘Science-centered and Talents-centered’ -- and I felt this is what nationality is all about,” Lee said. “I will learn more about (the North) at this time, and hope this provides us with a chance to build a trustful relation.”

Ri welcomed Lee, saying, “Mr. Lee is a very high-profile figure in many aspects,” asking that he contribute to efforts for peace, prosperity and unification of the nation. 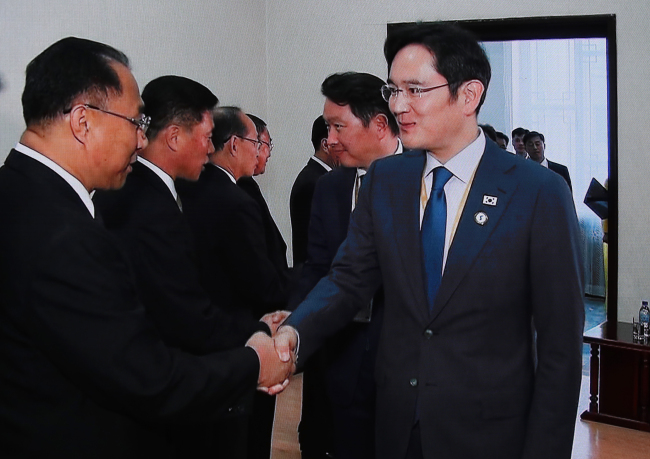 Without any concrete deals in mind, the biggest conglomerate chiefs were undertaking a somewhat controversial visit to Pyongyang to possibly look for future business opportunities involving North Korea.

Including Lee, 17 business leaders from a variety of industries joined the 52-member special delegation, created as part of the Moon government’s “new economy” initiative for the Korean Peninsula.

Some in political circles and academia labeled the business tycoons’ visit “controversial” as an act of putting implicit pressures on them to make financial investments or support for the North despite the standing restrictions imposed by the international community.

Cheong Wa Dae acknowledged the business leaders’ Pyongyang trip was an opportunity for them to prepare for the future, rather than to establish business operations in the North immediately.

“Under the current circumstances, there will be some areas that can be discussed and areas that can’t,” said Yoon Young-chan, senior secretary to the president for public communication, during a briefing.

“It is also difficult to say whether it’s about time to lift the sanctions,” he said. “We are coordinating with the international community (on the issue of) international sanctions, and some changes could be made if new conditions are (established), including (further) talks between North Korea and the United States.”

There had been no request from the North to include businessmen in the delegation as some news outlets reported earlier, Yoon said.

“And no concrete memorandum of understanding is planned to be signed between the South’s companies and the North’s counterparts during the trip,” he added.

The business community denied the latest trip was an immediate resumption of business operations in the North.

“This trip will serve as a chance for the chaebol chiefs to get very raw ideas about tentative business plans when the political situation improves in the future,” said an industry insider.

“As Cheong Wa Dae has said, economic cooperation will be impossible without denuclearization. But the business chiefs are taking such risks to learn about North Korea.” 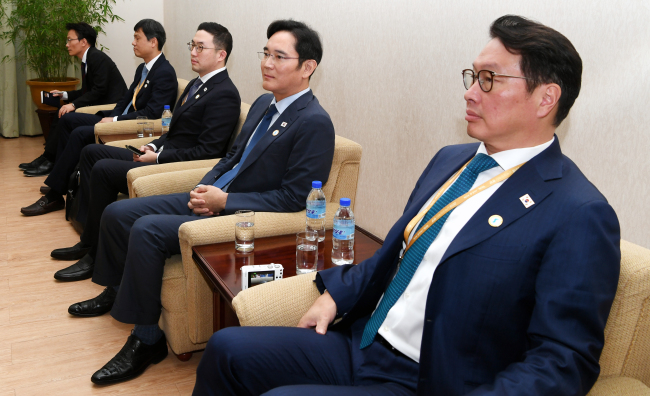 From right to left: SK Chairman Chey Tae-won, Samsung Vice Chairman Lee Jae-yong, LG Chairman Koo Kwang-mo, and etc, sitting in a room at People's Culture Palace in Pyongyang on Tuesday. (Joint Press Corp)
Early Tuesday morning, LG Corp. Chairman Koo Kwang-mo was one of the first among the chaebol chiefs to arrive at the eastern parking lot outside the palace Gyeongbokgung, where delegation members gathered before boarding a bus for Seoul Air Base.

In response to The Korea Herald’s question of whether he had made sufficient preparations ahead of the visit to Pyongyang, Koo nodded “yes.”

This is the first official public appearance for Koo, the fourth-generation leader of Korea’s fourth-largest business group, since he took the office in June.

Samsung Vice Chairman Lee offered no comments in response to reporters’ questions upon his arrival.

However, before his departure, Lee held a last-minute meeting with CEOs Rhee In-yong and Chung Hyun-ho to discuss Samsung’s possible business plans in North Korea and finalize a corporate message about the Pyongyang visit.

The Samsung heir also reportedly learned about potential business opportunities, including the possibility of establishing an industrial complex focusing on electronics, from former Vice Chairman Yun Jong-yong, who had accompanied former presidents Kim Dae-jung and Roh Moo-hyun to Pyongyang in 2000 and 2007.

Samsung’s de facto holding company, Samsung C&T, launched a South-North economic cooperation task force in April, which is gathering information about the North Korean market and researching financial regulations that would affect investments in the North. Lee reportedly was briefed about key issues by that team.

SK Chairman Chey belatedly got on the airport-bound bus, saying, “I will talk about it later,” referring to the group’s business plans for the North. SK Group is South Korea’s third-largest conglomerate and its affiliates include the country’s biggest mobile carrier and the world’s second-largest memory chipmaker, among other businesses.

Sohn briefly mentioned the group might consider launching “some cultural and food businesses” in the North.

Most of the business delegates remained extremely careful to avoid discussing potential business opportunities in the reclusive regime, which is still the target of international sanctions imposed by the UN Security Council.