The new economic road map for the two Koreas, one of Moon’s 2016 election campaign pledges, involves a strategy to develop and connect economic zones on the east and west coasts of the Korean Peninsula, as well as the Demilitarized Zone, in the form of an “H-shaped economic belt.”

On the east coast, the plan aims to jointly develop Kumgangsan as well as the cities of Wonsan, Tanchon, Cheongjin and Rason in the North, emphasizing energy and resources in the hope of eventually expanding into Russia’s Far East.

For the west coast, the plan is designed to develop logistics and transportation belts by connecting Gyeonggi Province in the South with the Kaesong industrial park and the cities of Pyongyang, Nampo and Sinuiju in the North, with the ultimate goal being to reconnect the Korean Peninsula with Shanghai and the rest of Northeast Asia.

There are also plans to create tourism belts connecting Seoraksan, Kumgangsan, Baekdusan and the Demilitarized Zone. 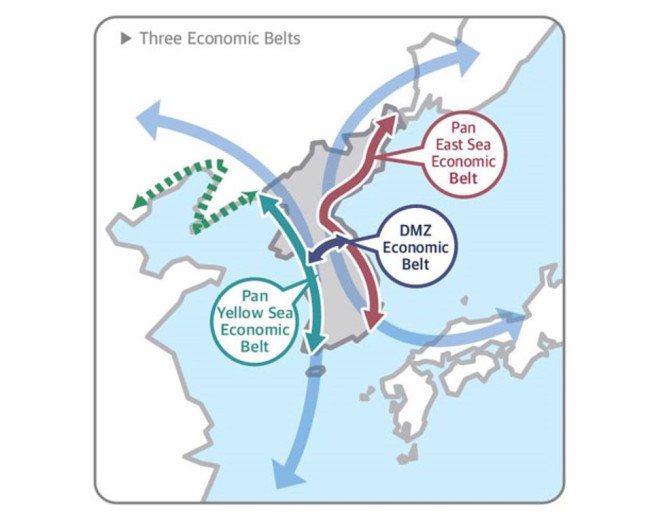 The business delegation for this week’s summit also includes a number of CEOs from public companies responsible for the nation’s social overhead capital in addition to the leaders of the top four conglomerates, Samsung, SK, LG and Hyundai Motor.

The delegation is scheduled to meet with Ri Yong-nam, the deputy prime minister for economy of North Korea, on the first day of the visit, said Moon’s chief of staff, Im Jong-seok, Monday.

However, the South Korean government is still cautious about economic discussions as the North still faces sanctions from the United Nations. 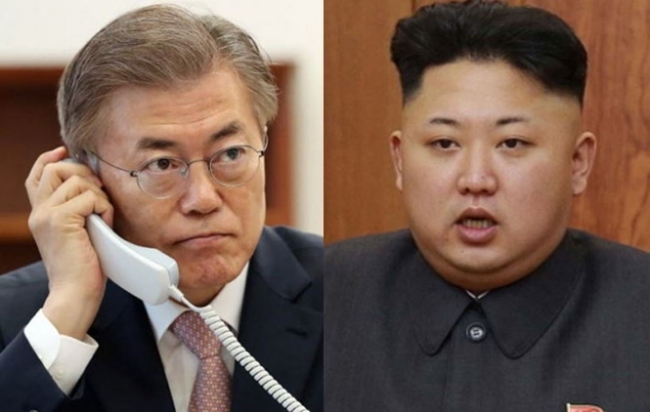 South Korean President Moon Jae-in (L) and North Korean leader Kim Jong-un (KCNA-Yonhap)
“Because very strong sanctions are imposed (on the North) by the international society, there is a distinct boundary between what we can and cannot implement,” Im said during a press briefing on Monday.

He also tried to downplay expectations about the roles of the business leaders who are slated to visit the North.

“Their visit is not special. It is too early to talk about a specific agenda. Now is not the time for that,” he added.

The US called for an urgent meeting of the United Nations Security Council on Monday to address recent efforts by Russia to undermine UN sanctions against North Korea.

“The United States is as committed as ever to continuing to enforce those UN Security Council resolutions,” Pompeo was quoted as saying by NBC News.

“We believe they are central to President Trump’s efforts to convince Chairman Kim that full, final denuclearization of the Korean Peninsula is necessary,” he was quoted as saying.

Uncertainty related to the two Koreas’ economic cooperation has led to stock market volatility this month.

"With the massive participation of the business moguls in the third summit, there is a high expectation for the economic cooperation of the two Koreas. Still, it is hard to predict portfolios due to the risk factors of the North,” said Kim Byung-yeon, an analyst from NH Investment & Securities.