[ The Korea Herald – Send E-mail ]
Mixed reactions over HyunA and E’dawn’s dismissal by agency
By Hong Dam-young
Published : Sep 13, 2018 - 15:32
Updated : Sep 13, 2018 - 15:32
Fans were dumbfounded on Thursday to hear the shocking news that Cube Entertainment had dropped HyunA and E’dawn, saying the two singers had irreparably broken the agency’s trust.

Social media erupted in response to the announcement. HyunA and E’dawn, members of the K-pop trio Triple H, went public about their romantic relationship in August without their agency’s permission and have been keeping a low profile ever since.

“We decided the trust is broken and cannot be saved, so we are kicking the two out of the company,” Cube Entertainment said in a statement. 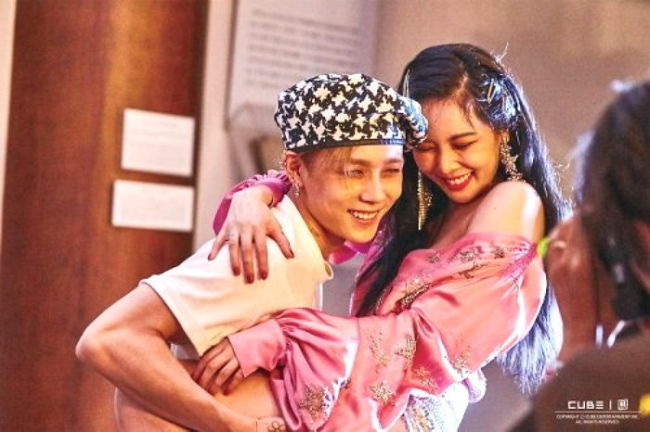 (Cube Entertainment)
Reactions to the news -- one of the biggest K-pop stories of this year -- have been mixed, with many fans on social media expressing the opinion that the agency’s punishment was brutal and extreme.

“Cube is a good example of a terrible agency,” one commenter wrote. “This has nothing to do with trust. What they needed to show was support and solidarity. Two adults, 24 and 25, being kicked out for dating. And for those who wanted them to be kicked out, shame on you!”

“They both have so much talent,” wrote another commenter, “and Cube is just gonna waste that talent?! And just because they‘re both dating?! Is dating illegal now?!”

“Cube really messed up,” wrote another commenter. “… this is so unfair like just bc they fell in love? I didn’t know Love was a crime. Stay strong everyone, I’m really sorry for this stupidity.”

But other fans suggested there might be more to the story.

One person commented, “Kicking out its most beloved artists means that Cube is really upset. There must be something more serious going on between them and the agency.”

“I kind of understand why Cube was so upset,” another commenter wrote. “They went behind the agency’s back and revealed their relationship without speaking with the agency first.”

HyunA, a former member of girl bands Wonder Girls and 4minute, and E’dawn of Pentagon confirmed in August that they had been dating for two years. The two have also worked together in the K-pop trio Triple H. After the news emerged, Cube canceled all their scheduled promotions and announced that the E’Dawn would be taking a temporary leave from both Pentagon and Triple H.