The authorities say the 12 men ate high-calorie foods such as pizza and hamburgers five times a day in an effort to become overweight and fail the physical. One gained 30 kilograms in six months, the authorities said.

According to the Military Service Act, all able-bodied men have to serve two years in the military before they turn 28. Prior to enlisting, they must undergo a physical exam to determine whether they are fit for active duty.

Men who score lower than four on a seven-point scale are deemed unfit for active duty. Depending on the nature of the physical challenges they face, they may be exempted or assigned to work in the community through alternative service programs. 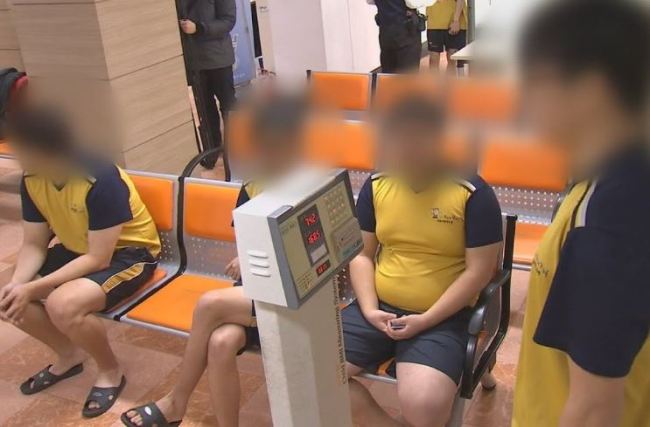 Potential conscripts (not the men in the story) take a physical exam to determine whether they are fit for military service. (Yonhap)
Of the 12 men accused of draft dodging, two have already completed an alternative service program and four are still working at a community center as part of the program. The other six have not yet enlisted, according to authorities.

During the course of the investigation, Military Manpower Administration officials said the men were hoping to be assigned to the alternative program because they knew they would have time to sing after work.

Authorities said the men -- all vocalists who had graduated from the same college in Seoul as music majors -- had shared weight-gain strategies via a KakaoTalk group chat room.

According to the digital forensic findings, the men suggested eating “high-calorie protein shakes, supplements and drinking a lot of aloe juice to retain water weight.” Some suggested acting “crazy” on purpose.

The Ministry of National Defense said the case would be referred to the prosecution. If found guilty, the men will be forced to serve the mandatory two years, including the two men who have already completed the alternative program.