[ The Korea Herald – Send E-mail ]
Will Samsung unveil world’s first foldable phone in November?
By Song Su-hyun
Published : Sep 10, 2018 - 16:21
Updated : Sep 11, 2018 - 10:22
Samsung Electronics might reveal some details on the world’s first foldable smartphone in the pipeline at its developers’ conference in San Francisco in November, according to the industry on Monday.

Rumors that the South Korean tech titan would unveil its foldable phone at the Samsung Developer Conference have been circulating around the world following a recent interview of the company’s mobile business CEO Koh Dong-jin by a group of foreign media outlets last week. 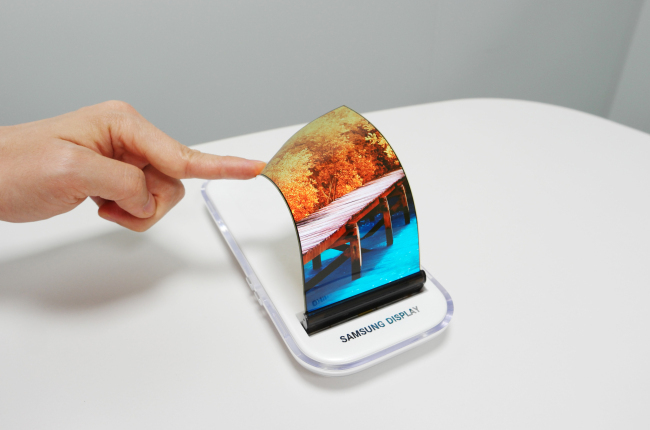 Flexible OLED display (Samsung Display)
Samsung has dismissed the rumors, saying the company’s official stance has not been confirmed yet. However, it acknowledged that more details of the foldable phone could be announced at the event, as it is approaching completion of the development.

“We will have more to say about the phone under development by that time, probably some details about specifications,” said a Samsung official.

Some foreign media outlets have criticized Samsung for “teasing” the press, as it has been postponing the unveiling since early this year.

“We have overcome a major technological hurdle for the foldable phone, but we are not sure yet when consumers will be in need of such a new type of phone,” said CEO Koh in February.

However, the CEO had hinted Samsung is gearing up for the foldable phone as the company unpacked the Galaxy Note 9 phone in August, saying, “We will not give up on being the world’s first.”

Koh has revealed the foldable phone will have a foldable screen instead of a display hinge as several earlier patent application images have shown. The company is in the last stage of the development and the phone is expected to be able to be released early next year.

According to some news reports, Samsung’s first foldable smartphone, codenamed “Winner,” is said to feature a 7.3-inch OLED display, which can be folded inward with a curvature radius of 1.5 millimeters. An extra 4.6-inch OLED display is said to be installed on one side of the phone.

The prototype of the foldable model is likely to be built around November, and the phone is expected to make an official debut at the Consumer Electronics Show or the Mobile World Congress early next year.

The SDC is an annual event that showcases the company’s advancements in software and how it wants to go further to make it easier for developers to make applications for Samsung devices. It will take place at Moscone West in San Francisco from Nov. 7 to 8.

The second edition of Samsung’s voice assistant platform Bixby will be presented at the event, while Galaxy Home, its Bixby 2.0-powered artificial intelligence speaker, will be announced with more details.

“Samsung is expected to showcase some of its next-generation products, including the foldable phone and AI speaker in order to retain market attention and not to lose the world’s first title,” said an industry source.