[ The Korea Herald – Send E-mail ]
More than 400 to be monitored after first MERS case in three years in Korea
By Claire Lee
Published : Sep 9, 2018 - 18:05
Updated : Sep 9, 2018 - 18:05
A total of 22 people, including four medical professionals and a cab driver, have been quarantined at home after the country’s first Middle East respiratory syndrome case in three years was reported, health authorities said. Some 440 people who had indirect contact with the patient will be monitored, they added.

The patient, 61, was diagnosed with the infectious disease after returning from a business trip to Kuwait from Aug. 16 to Sept. 6. He took two flights to get home from Kuwait to arrive in Seoul on Friday -- Emirates EK 860 from Kuwait to Dubai, and Emirates EK 322 from Dubai to Incheon.

“People who are believed to have been in close contact with the patient, including flight attendants, have been asked to stay at home,” said Jeong Eun-kyeong, an official at the Korea Centers for Disease Control and Prevention. 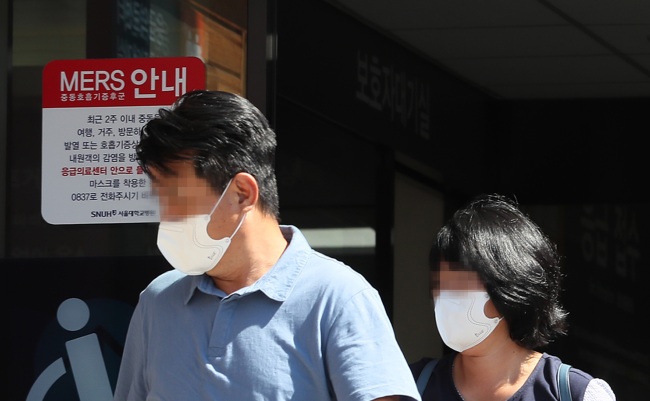 Visitors are wearing masks at Seoul National University Hospital, where a MERS patient is currently being treated under quarantine. (Yonhap)
The government held an emergency meeting of Cabinet ministers on Sunday to discuss measures to deal with the case.

Airport officials and health authorities have drawn flak after it was revealed that the man was not quarantined at the airport upon his arrival on Sept. 7, although he had told officers that he had experienced diarrhea, one of the major symptoms of MERS, for about 10 days while overseas.

It has been reported that the patient requested a wheelchair when he got off the plane, as he was feeling too unwell to walk.

From the airport, the patient went straight to Samsung Medical Center in Seoul by cab. He was at the hospital’s public area for some two hours, according to the authorities.

The patient was officially diagnosed with MERS the next day, and was moved to an isolation ward at Seoul National University Hospital.

Asked why the patient was not quarantined at the airport, health authorities said that no MERS case had been reported in Kuwait since 2016, and that he had no symptoms other than diarrhea when he arrived at Incheon.

The 22 individuals who have been placed under home quarantine include a family member of the patient, four medical staff at the Samsung Medical Center, four flight attendants, 10 airplane passengers, one cab driver, and three airport employees, including the person who assisted the patient with the wheelchair. They are also indefinitely banned from leaving the country.

MERS swept South Korea in 2015, infecting 186 and claiming 38 lives. The outbreak dramatically affected the everyday lives of Koreans at the time, as it sparked a public health scare and dampened consumer spending.

Almost 3,000 schools nationwide were shut down in June that year, while more than 124,000 foreign tourists, mostly from China, canceled their trips to Korea in the same month.

Typical MERS symptoms include fever, cough, shortness of breath and diarrhea. A total of 791 MERS-associated deaths have been reported worldwide since it was first identified in Saudi Arabia in 2012. Approximately 35 percent of reported patients with MERS have died.

No specific treatment or vaccine is currently available for MERS. Treatment is only supportive and based on the patient’s clinical condition.

The public has been advised to call 1339 if they suspect MERS symptoms.