“I want to have this service while I’m still alive,” Kim wrote in his invitation to his friends. “Please dress in bright colors. Hope we can sing and dance together.”

Kim’s funeral ceremony, held on Aug. 14 in a hospice facility in Seoul, was indeed quite different from what one normally sees at Korean funerals. No one was sobbing. There was no portrait in front of an altar decorated with flowers. Rather, it looked like an informal community gathering or a party. There were finger food, balloons, cheerful music by a live band and, most importantly, the person whose life was being celebrated -- Kim. 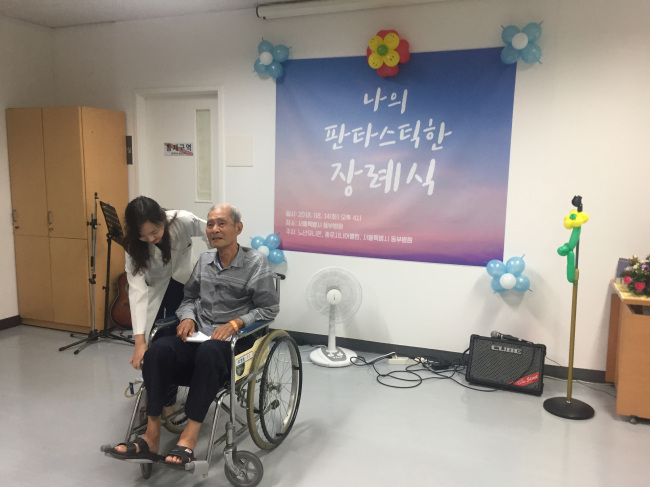 “What’s the point of having a funeral when you are already dead?” Kim said in a wheelchair, adding that he does not want any additional funeral service after he dies, and he wants to be cremated.

“Death is something that is inevitable. No one can avoid it. I want to say bye and thank you to those who meant a lot to me and my life while I still have the time, rather than having others cry for me when I’m not even going to be there.”

Kim is part of a South Korean senior rights group calling for a change in the country’s funeral culture, which they say is “too emotionally draining” and “excessively solemn.” Korean funeral rites typically last three days -- visitors pay respect to the dead at a funeral home, often attached to hospitals, during the first two days -- and end with a burial or cremation at a separate site on the third day.

As Korea has already become an aging society, the elderly activists say Koreans should change their views on deaths and funerals.

“We would like to think of deaths and funerals as a transition, rather than an end,” Kim Sun-tae, a retired teacher and a member of the group, said at his colleague’s funeral.

As of this year, elderly Koreans -- defined as those aged 65 and older -- account for 14 percent of the South Korean population. Experts estimate that they will account for 37 percent by the year 2050. An increasing number of aging Koreans are living alone, making up 23 percent of the elderly population as of this year. But among them, only 4 percent say they are happy with living on their own, worried about finances while struggling with loneliness. According to the Organization for Economic Cooperation and Development, about 50 percent of all aging Koreans live in relative poverty.

Kim’s checkered life is typical of many Korean elderly.

Born in Yongchon, a town in North Pyongan Province of today’s North Korea, he fled to the South with his uncle in 1947 to escape the communist regime. He survived harrowing poverty during the Korean War (1950-53). After the war was over, he became an electrical engineer, got married, and had children. To better provide for his family, he worked as an engineer in Vietnam for the US military during the Vietnam War. He was able to buy a house in Seoul after serving two years in the foreign country. 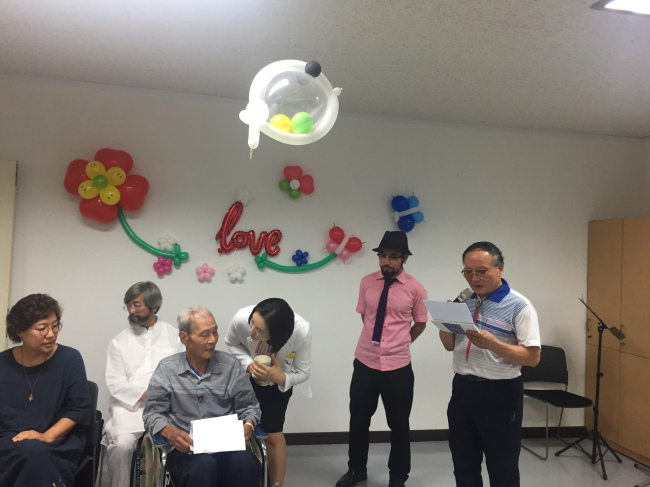 Kim Byung-guk (in wheelchair) listens to his colleague Kim Sun-tae (far right)`s speech during his own funeral at Seoul Metropolitan Dongbu Hospital on Aug. 14. (Claire Lee/ The Korea Herald) 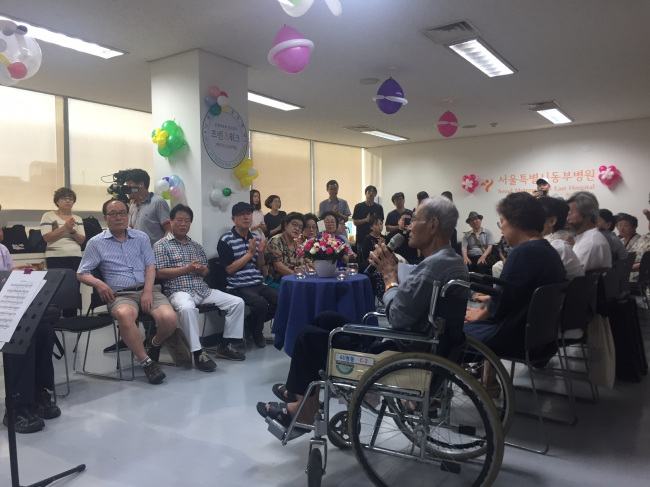 Kim Byung-guk (in wheelchair) speaks at his funeral at Seoul Metropolitan Dongbu Hospital on Aug. 14. (Claire Lee/ The Korea Herald)
Upon returning to Seoul, Kim worked at eight construction firms until his retirement in 1997, at age 65. Like many Korean parents, Kim covered university tuition for all of his five children, as well as paid for their housing.

Thinking himself too young to be unemployed at 65, he started his own business, which ended in a disaster in the aftermath of the Asian Financial Crisis in the late 1990s. He lost all of his retirement savings as a result, he said.

His wife died a few years later. No longer in contact with his children, he had been living alone for eight years in gosiwon, a tiny room around 3 square meters in size, mostly relying on the state pension -- 200,000 won ($178) a month -- and taking on temporary jobs, when he was diagnosed with cancer last year.

It was during these years that he worked as an elderly rights activist, calling for better welfare protection and employment opportunities for the elderly.

Kim lived alone on a very limited income, yet he was not eligible for welfare benefits for the poor because he had children with regular income who would be able to support him. The welfare program for the poor also considers national pension payments as an elderly citizen’s income, deducting the amount -- some 200,000 won a month -- from their welfare allowance.

Prior to his cancer diagnosis, Kim had been fighting to change this. He staged protests in front of the National Assembly and Cheong Wa Dae, and gave more than 100 media interviews, among other activities, working in solidarity with young Koreans who struggle with unemployment and unaffordable housing costs.

None of Kim’s children attended his funeral service. Instead, among some 50 guests were social activists calling for pension reforms, a group of young musicians, social workers, a Catholic priest and nurses in the hospice taking care of him.

“I’ll always remember Kim as a fighter,” said Oh Geon-ho, an activist at My Welfare State, an NGO, at the funeral. “I had the privilege to work with Kim all these years, and we fought together for a fairer world. He was never afraid to speak up when he had to, always sharing his thoughts and experiences without hesitation. We’ll always remember and appreciate what Kim has done for us, for his colleagues and for our society,” he said, tearing up.

Catholic priest Jeon Seok-dal said Kim is pioneering a new path in the country’s funeral culture. “As a priest, I’ve attended many funerals in my life,” he said at the service.

“Some of the most heartbreaking services I’ve witnessed are the ones of those who died abruptly, either in accidents or by illnesses such as heart attacks. For such deaths, I found that the surviving family members and friends have a harder time coping because they didn’t get to share their last words or, in some cases, have the chance to say sorry and reconcile. 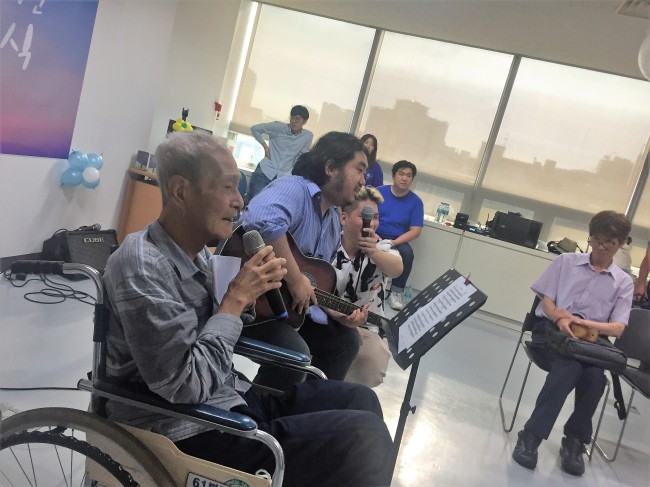 Kim Byung-guk (in wheelchair) sings his all-time favorite song, along with a group of young social activists, at his funeral at Seoul Metropolitan Dongbu Hospital on Aug. 14. (Claire Lee/ The Korea Herald)

“I really appreciate Kim’s funeral service because it’s really about him, not those who will remain, and we get to properly express our gratitude for him and his life in his presence.”

At the end of the service, a group of young housing rights activists sang Kim’s all-time favorite song -- “Moving Day” released by the Korean female duo Saniseul in the 1970s. The cheerful tune, which sounds almost like a children’s song, depicts a young girl’s last day with her neighborhood friend before she leaves the town for another with her family.

“We think this service is very much like a moving day for Mr. Kim,” one of the singers said. “We believe he’s moving to another place, rather than leaving us for good.”

Kim joined the young musicians and sang along, looking visibly moved and joyous at the same time.

“My friend, who lived right behind me, cried all day hiding behind large pots, because he didn’t want to say good-bye,” the lyrics went.

“Because he didn’t want to say goodbye.”