Two of the level-four autonomous 11-seaters will run between the entrance of the second Pangyo Techno Valley and the Pangyo subway station, a distance of about 5.5 kilometers. The vans will travel at 25 kilometers per hour.

There are five levels of autonomy among self-driving vehicles, with a level-five vehicle being fully autonomous and requiring no human intervention, according to the US National Highway Traffic Safety Administration. 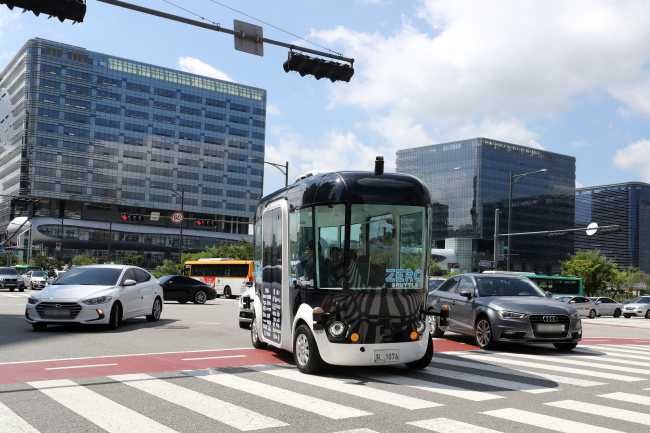 South Korea’s first driverless van, Zero Shuttle, begins its test run on Tuesday in Pangyo, Seongnam, Gyeonggi Province. (Yonhap)
“What I imagined as a young child through cartoons has become reality. This is a meaningful day that clearly shows the direction Gyeonggi Province and South Korea’s business (world) and economy should head toward,” said Gyeonggi Province Gov. Lee Jae-myung at the ceremony at the second Pangyo Techno Valley.

Lee added that full support would be provided for Pangyo to emerge as an important high-tech industrial center for Korea.

During September and October, professionals and officials involved in the project will ride the shuttle to test it out, and test rides will be open to the public starting in November, the Gyeonggi provincial government said.

Some 32 agencies -- 20 small and midsized businesses, two conglomerates, five government agencies and five universities -- will participate in the first round of test drives.

Zero Shuttle is not equipped with a steering wheel, accelerator or brake pedal and runs on vehicle-to-everything technology, exchanging real-time traffic updates and GPS information with an integrated control center.

“It is true that South Korea is a latecomer to autonomous technology compared with the US, China and other countries. I hope Zero Shuttle will be a starting point for the country to form a self-driving industry ecosystem and further improve global competitiveness,” said Kim Jae-hwan of the Advanced Institute of Convergence Technology, who oversaw the development of Zero Shuttle.

The Advanced Institute of Convergence Technology spent three years developing Zero Shuttle, and did so at the request of the Gyeonggi provincial government.