[ The Korea Herald – Send E-mail ]
[Weekender] People in Noryangjin-dong talk about 2019 policy
Noryangjin bookworms skeptical of Moon's policy
By Yim Hyun-su
Published : Sep 6, 2018 - 17:53
Updated : Sep 6, 2018 - 18:03
Policymakers announced in late August that the government would hire 36,000 new civil servants in 2019, drumming up excitement among South Koreans studying to land a job in the sector.

According to the Finance Ministry’s budget blueprint for next year, there will be 21,000 national government job vacancies and 15,000 in regional public service.

The news is expected to further buoy the civil service job boom, as the stable nature of such jobs attracts young people and the country is suffering its highest-ever youth unemployment rate. 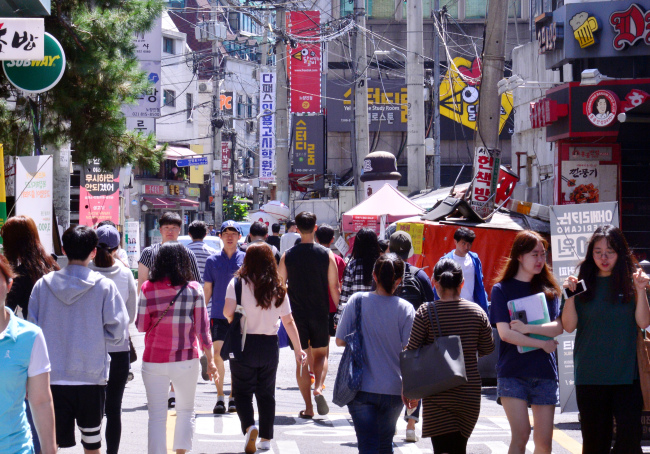 People walk down a busy street of Noryangjin on a Tuesday afternoon. (Park Hyun-koo/The Korea Herald)
But Noryangjin, a mecca for thousands of students preparing for public service exams, seems largely unmoved by the announcement.

Lee, one of the many students who were walking to private academies on Monday afternoon to hit the books in preparation to apply for a public sector job, did not seem thrilled. She declined to give her full name.

“It’s good news but most of the increases in job openings are for positions with few vacancies in the first place.”

Lee, who is studying for a job in general administration, also added she and her friends who are preparing for the same exam do not believe the move would affect them much. 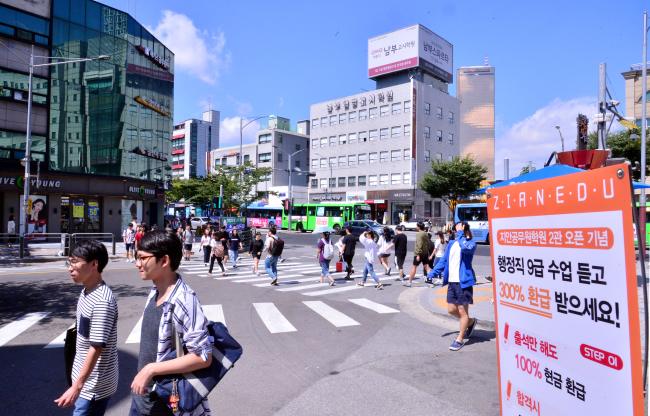 Pedestrians cross the street near Noryangjin Station. (Park Hyun-koo/The Korea Herald)
Lee’s skepticism is justified, as the government’s budget proposal shows an increase in the number of jobs mostly in the police, military, education and postal service sectors.

The new move could provide a breath of fresh air to Noryangjin, which has seen a fall in the number of students in recent years, as they flock to online lectures. But business owners in the area question the degree to which the hiring increase will make a difference.

Kim, who has run a cafe for over a decade in the neighborhood, cautiously welcomed the government’s efforts to increase public service jobs, but was not too excited.

“There is no doubt it’s a good move for us (business owners.) But many students have already turned to online lectures and the economy is not in good shape, which I think explains the declining number of students here.”

Kim, whose number of customers has dropped by more than half over the last decade, says that it is now one of the quietest times of the year in the normally busy neighborhood, with two exams recently having taken place and the long Chuseok holiday approaching. She declined to give her full name.

Asked about the prospect of newcomers in the wake of the government’s announcement of new public service job openings, Kim first responded, “None,” before she changed her tone and said “maybe a little.”

The cafe owner said while many students come to the area for a sense of solidarity and motivation, not all students who come to Noryangjin succeed in their academic endeavors, adding she would have to wait and see what impact the policy direction will have on the neighborhood. 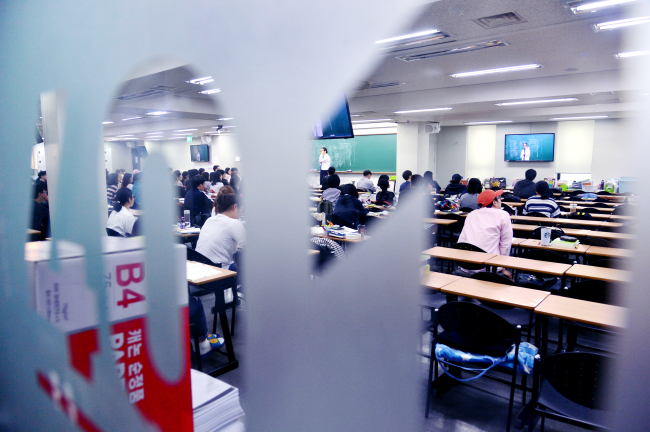 Students attend a lecture in a classroom at a private academy in Noryangjin. (Park Hyun-koo/The Korea Herald)
A local estate agent, who declined to be named, had a more positive view of the situation facing the district.

“When I looked at figures from a local community center, approximately 200 residents left the neighborhood this year compared to last year, which is not really a big change,” he said while emphasizing the situation is not as bad as some media outlets make it out to be.

“Given the sluggish economy, it is true that fewer students have come from other parts of the country. Private education services offering online lectures at a much cheaper price play a role also.”

“But as much as the number of residents has dropped, there are now more rooms (for rent in other parts of) Noryangjin.”

The agent explained that residents in the neighborhood are now scattered over a wider area as new residential buildings that have sprung up in surrounding neighborhoods also accommodate students.