Detailed prospects, however, remain unclear as related ministries held different stances over the reduction of benefits for lease business operators -- an action that may deliver a blow upon the government’s policy credibility.

“We will begin discussing with the ruling party on ways to reinforce the comprehensive real estate tax bill,” said an official of the Ministry of Economy and Finance.

“As the government bill (on the agenda) already exists, the upcoming alterations are likely to involve stronger regulations (on the comprehensive tax).” 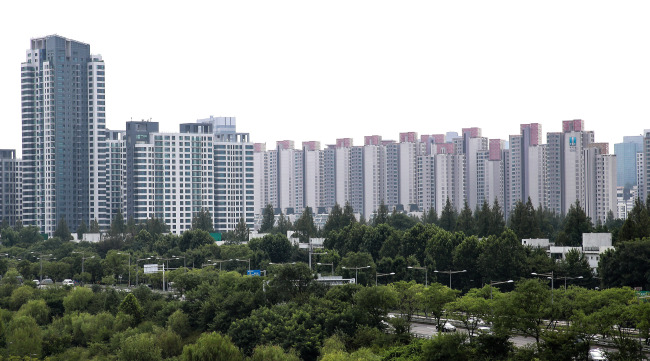 The ministry had proposed in July a set of tax hike plans, focusing on raising the tax rate on owners of multiple homes and of high-priced properties, as part of its effort to level off skyrocketing housing prices and to reduce the country’s widening income gap.

The scheme included a tax rate hike for real estate priced at 600 million won ($540,000) or more, with the maximum rate to be raised to 2.5 percent from the current 2 percent.

While the government-led proposal involves a tax boost amounting to 742 billion won next year, the ruling progressive Democratic Party of Korea has been pushing ahead with more drastic taxation scenarios.

“The government should strongly consider strengthening the comprehensive real estate tax on those who own more than three apartments or high-priced apartments,” said Rep. Lee Hae-chan last week during his first meeting as party chief with senior officials of Cheong Wa Dae.

Underlining his past experience under the Roh Moo-hyun administration, when he served as prime minister, Lee called for “necessary actions” to respond to speculative investments.

Taking a detailed step further from the government stance was Rep. Park Joo-min, a member of the party’s Supreme Council, who earlier motioned a revision of the Gross Real Estate Tax Act to hike the key rate to up to 1 percentage point. Park’s bill, should it take effect, is to trigger an annual tax revenue increase of 4.5 trillion won starting next year.

Though acknowledging the need for stronger actions concerning the overheated real estate market, the Finance Ministry reserved its final stance on its policies, especially on the change of benefits for lease business operators.

“Related ministries will hold an extensive discussion, considering the purpose, effect, side effect and market leverage of the corresponding system,” said an official.

“So far, we are looking (at the issue) from multiple perspectives.”

The controversy on lease operators was triggered by Minister of Land, Infrastructure and Transport Kim Hyun-mee, as she suggested that benefits for registered lease properties need to be cut down for taxation equity’s sake.

“Speculators seem to enjoy excessive benefits from the current tax benefits for lease business properties,” she told reporters in a press conference Friday.

“We are discussing with the Finance Ministry on ways to reduce some of those benefits.”

The Moon Jae-in administration has so far offered tax benefits to multi-home owners who register themselves as lease business operators, encouraging them to reveal their assets and manage their tax affairs transparently.

As the nation’s fiscal headquarters, the Finance Ministry is taking a more prudent stance over flip-flopping on the policy announced only months ago.

“(The tax benefits) had the intended effect of encouraging multi-home owners to register themselves as business operators, but also contributed to the housing price hike,” said an official from the ministry.

“We shall keep a close watch on market situations before taking actions.”