The repackaged album, the final part of the band’s multiyear “Love Yourself” trilogy, took the top spot for the week ending Aug. 30 with the equivalent of 185,000 albums sold, according to Billboard. Of that number, 141,000 consisted of traditional album sales. 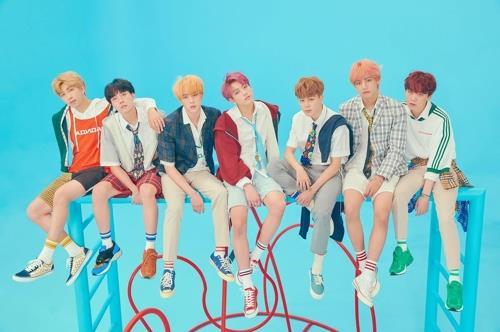 (Big Hit Entertainment)
The band’s previous album, “Love Yourself: Tear,” made history by reaching the top of the chart with 135,000 units, including 100,000 traditional album sales, upon its release in May. The Billboard 200 chart ranks the most popular albums of each week on the basis of multiple consumption metrics, expressed in “equivalent album units.”

The 14-track “Love Yourself: Answer” features lead track “Idol,” which topped major local streaming charts upon its release Aug. 24. The video for the boisterous song, which fuses traditional Korean sound with South African music, had the best 24-hour debut in YouTube’s history, surpassing 50 million views in its first 20 hours and beating Taylor Swift’s 2017 first-day record of 43.2 million views with “Look What You Made Me Do.”

As the only Korean act to ever see its albums achieve the No. 1 rank in the US, BTS will kick off its US tour Wednesday and will put on the first-ever stadium show by a Korean act at Citi Field in New York City on Oct. 7. It will then continue on to London, Amsterdam, Berlin, Paris, Tokyo, Osaka, Nagoya and Fukuoka.