[ The Korea Herald – Send E-mail ]
Scandal-ridden comedian Shin Jung-hwan makes controversial comeback
By Im Eun-byel
Published : Sep 2, 2018 - 16:28
Updated : Sep 2, 2018 - 16:28
Singer-comedian Shin Jung-hwan has broken his yearslong hiatus with an appearance on the JTBC’s hit talk show “Knowing Bros,” but the comeback has sparked controversy from the public still disgruntled about the gambling scandal that led to his absence.

In Saturday’s episode, Shin appeared as a guest, along with Kim Ji-hyun and Chae Ri-na. The three and Lee Sang-min, a permanent cast member of the show, were members of old-school co-ed group Roo’ra.

The show mainly focused on the fame and the popularity of Roo’ra in the 1990s, but was often interrupted with jokes implicating Shin’s gambling scandal. Even the production team inserted computer graphics and subtitles referring to it. 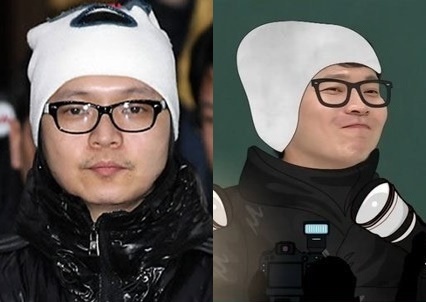 On the left, Shin Jung-hwan apologizes to the public before being arrested at the Incheon Airport in January, 2011 (Yonhap). A screenshot of Shin Jung-hwan on “Knowing Bros” (JTBC)
In 2010, Shin was charged for illicit gambling in the Philippines. While several celebrities have managed to redeem themselves after taking part in illegal gambling, it was the lie he told afterwards to avoid criticism that further angered the public.

In what was seen as an attempt to win some sympathy points, he feigned Dengue fever, a serious mosquito-borne disease. He was eventually sentenced to an eight-month jail term but was released on parole after six months.

On the show, appearing on the set later than others, Shin said, “I am sorry. I am Shin Jung-hwan.”

“I have to carry on the debt and the fault as I did something I should not have done,” Shin said, making an apology to the viewers. “I never thought that I could turn the public at once. I have to work hard and live life to the fullest for a long period of time.”

When the production team of “Knowing Bros” first hinted that Shin would be appearing as a guest on the show, online comments were filled with criticism that the show is trying to help an ex-convict make a comeback.

After the show aired, the criticism continued, as the cast members lightly joked on the gambling scandal. Online comments argued, questioning whether illicit gambling is an issue to be laughed off.

This was not the first time that Shin tried to return to the small screen. He signed an exclusive contract with a talent agency and geared up for a comeback last year, hosting Mnet’s reality show “Project S: Devil’s Talent Donation” which marked an average viewership share of 0.4 percent.

Meanwhile, “Knowing Bros,” which has been ranking an average viewership share between 5 to 6 percent, marked a rating of 2.09 percent on Saturday, partly because of Korea and Japan’s men’s football final match for Asian Games.