[ The Korea Herald – Send E-mail ]
[Herald Interview] Comic book writer works to better represent women in comics
By Im Eun-byel
Published : Aug 30, 2018 - 16:59
Updated : Aug 30, 2018 - 16:59
Amy Chu is a breath of fresh air in the comic book industry, especially in the US, where the industry is dominated by white men who have been reading comic books since they were young.

Chu is an Asian-American woman who, before becoming a writer, had worked in very different fields. There was not a hint in her youth that might have signaled her life would be in comics. 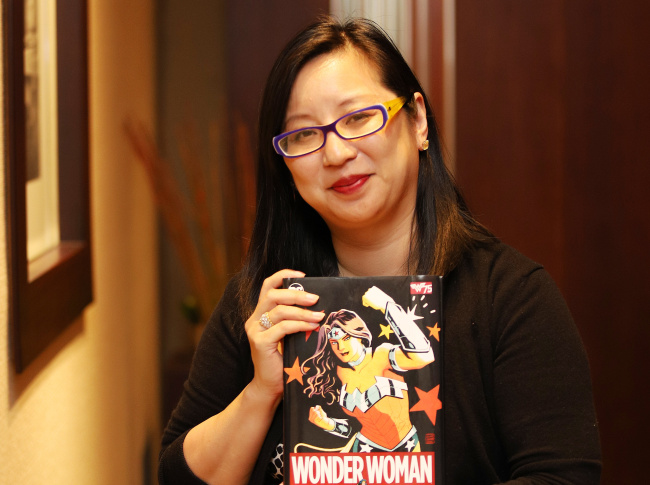 Amy Chu poses with her “Wonder Woman” comic book before an interview with The Korea Herald on Wednesday in central Seoul. (CICI)
As a story writer, Chu wrote the latest issues of best-selling US comic book series such as “Wonder Woman” and “The Green Hornet.”

“I have such an unconventional background for this job,” Chu said in an interview with The Korea Herald at Grand Hyatt Seoul on Wednesday. She was attending the 2018 Culture Communication Forum hosted by the Corea Image Communication Institute.

“I think (the diverse experience) helps me because I have more life experience. And really, to develop stories and develop good characters, you really need (it),” Chu said. “People ask me where I get my ideas and I really get my ideas from experiences in life.”

She was not one of those kids in school who worshipped comic books and the characters. It was only during her college years that she was exposed to the culture.

“At MIT, everybody reads comic book. There is a comic book store in the student center. If you do not read comics, it is a little bit weird. I never bought the comics but I would read the other people’s comics,” she recounted of her days at Massachusetts Institute of Technology. “So, that was my exposure.”

Chu graduated Wellesley College, a private women’s liberal arts college outside of Boston, with a dual degree from Wellesley and MIT.

In 2011, she was approached by a friend about doing comic books -- the friend would write and Chu would take care of the business side of things -- and they founded Alpha Girl Comics.

Eventually, Chu got into writing herself and has been writing comic books full-time for about three years. Though she was not familiar with the business, she took the chance.

“Being an Asian-American in the US, I am very aware of my race. Asians are a minority,” she said, as the third generation of immigrants from Hong Kong. “I am very well aware that there was a deficit of Asians in comics. So I do feel as an Asian-American it is important to represent (people like me).”

As a part of the effort, she put in a Filipino and an Indian character in the decades-old comic book series “Poison Ivy.” 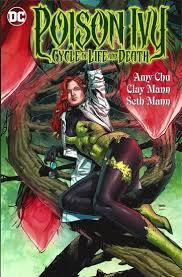 Cover of “Poison Ivy: Cycle of Life and Death” (DC Comics)
“This is not hard. But for the most part, traditional writers don’t necessarily think of it and they don’t understand the importance of that ... and the richness I can add in terms of diversity to the story,” she said.

Chu also would like to represent women more. She explained that the comic book industry is more conservative than many would expect. There are women writers, but when they get jobs, the stories are about female characters.

Asian women are mostly portrayed as sexy, exotic love interests, the writer said, taking an example from a character in the Green Hornet series. When she took over the series, she worked on changing it to better represent Asian women.

The artists who worked with her did not understand her intention at first. She had to explain everything step by step, even logging on to the Victoria’s Secret women’s lingerie website to explain specific types of underwear.

“It is catering to a certain perception of women, and the only way you sell the comics is you show cleavage. So this is still true for a lot of publishers,” she noted.

It was not easy to persuade her colleagues at first, but her unconventional background in the industry of having attended Harvard Business School kicked in.

“I asked them to know about what they want to do. What is important is not to criticize the quality,” she said. “Most writers don’t do that, they tell artists what to do.”

Chu stays hopeful, as a writer herself and also a business director.

“If you actually look at what’s selling and what’s been growing, it’s all the comics that don’t do that (represent women in a stereotypical manner),” she said.