JAKARTA -- South Korea collected four medals out of four weight divisions on the first day of judo events at the 18th Asian Games on Wednesday, led by gold medals from a pair of Olympic runners-up.

Jeong Bo-kyeong got the ball rolling by winning the very first judo final in Jakarta, capturing the women's under-48kg title over Ami Kondo of Japan.

She won her golden point with a shoulder throw in extra time. 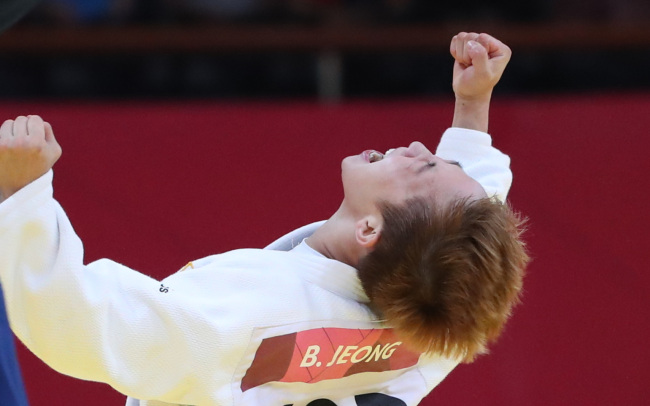 Jeong Bo-kyeong celebrates her gold medal on Wednesday. Yonhap
Kondo had Jeong locked in an arm bar but couldn't pin her down long enough for the winning score.

Jeong won silver at the 2016 Olympics when she was considered a gold medal favorite. She said Wednesday she drew extra motivation from that Olympic near-miss and battled through a left arm injury during the final to take Kondo down.

Lee Ha-rim followed it up by beating Shang Yi of China in the bronze medal match of the men's under-60kg event.

Then Park Da-sol grabbed silver in the women's under-52kg, following her loss by an ippon to Natsumi Tsunoda of Japan in the final.

An Ba-ul put the finishing touch on the productive day by taking the men's under-66kg crown. He needed only 50 seconds to bring down Joshiro Maruyama of Japan with his patented shoulder throw, good enough for an ippon, or a full point.

Like Jeong, An was a gold medal favorite at the 2016 Olympics and he was also the world No. 1 in his division at the time. An, too, settled for silver, but he now has an Asian Games gold medal in his first appearance.

There are three more days of judo left, with the mixed team event scheduled for Saturday after all individual divisions are finished.