[ The Korea Herald – Send E-mail ]
South Korean OB-GYN doctors stop performing abortions 'in protest'
By Claire Lee
Published : Aug 28, 2018 - 17:55
Updated : Aug 29, 2018 - 11:06
One of the biggest professional organizations of obstetricians and gynecologists in South Korea on Tuesday said its members have discontinued performing abortions, except legally allowed procedures, in spite of existing demand due to the government’s latest law revision that imposes harsher punishments on doctors who perform the illegal but common procedure in the country.

The decision is estimated to affect many women in South Korea, where some 3,000 abortions are said to be performed daily -- in spite of the procedure being illegal.

“We apologize to the citizens, and especially (the women) who will be affected by our decision,” said Kim Dong-suk, the head of the Korean College of Ob & Gyn, an organization representing some 2,000 obstetricians and gynecologists.

“But we want to make it clear that the Ministry of Health and Welfare is responsible for this situation,  and other upcoming consequences, which we think are far from ideal,” Kim said. 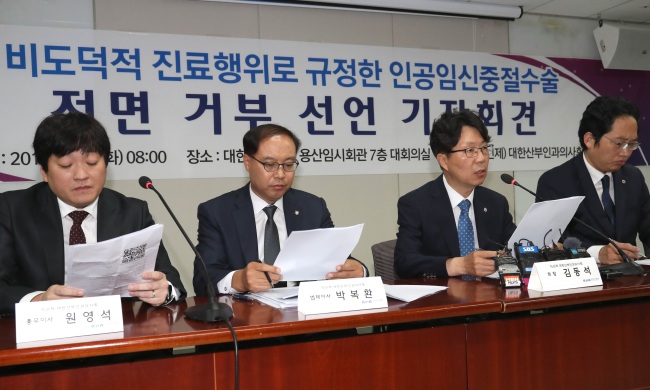 Kim Dong-suk (second from right), the head of the Korean College of Ob & Gyn, attends a press conference along with his colleagues in Seoul, Tuesday. (Yonhap)

The group’s decision was announced in response to the ministry’s latest law revision, which enables the authorities to suspend a medical license for one month for performing an abortion. South Korea is one of the few developed economies where abortion is illegal except in instances of rape, incest or when the mother’s health is at risk.

The new rule went into effect on Aug. 17, and on the same day, abortion was included in the list of what the government legally defines as “immoral medical actions,” along with dispensing medications past their date of expiration and committing sexual harassment against patients, among other actions.


The Health Ministry announced the new rule shortly after the Constitutional Court said earlier this month that it would indefinitely delay its ruling on the abortion ban, citing a recent judiciary reshuffle as the main reason.

In addition to the latest penalty, doctors are subject to two years in prison for performing the procedure, although prosecution has been rare.

“For many doctors who run their own clinics, having their license suspended for a month means potentially going out of business,” Kim told reporters at a press conference in Seoul on Tuesday.

“The new rule also aims to stigmatize gynecologists who perform the procedure as ‘immoral.’ We think this is extremely unfair -- especially when there is public debate going on, and many say that this procedure should be legalized for many valid reasons."

In an ironic twist, he said the members of the group are complying with the laws as a "way to resist" against the government's decision. The doctors won't be performing the procedure, which is in high demand, especially among vulnerable women, as a "form of protest" -- or a strike -- until the Health Ministry considers removing the new penalty on doctors.

The abrupt unavailability of the specific medical procedure in clinics, which had been very common in spite of being illegal, would cause undesirable consequences for many women and their families, he added.

"And again, this is what the government wants, and they will have to face responsibility for these," Kim said.

Not all physicians in the country endorsed the decision made by the Korean College of Ob & Gyn. Human Med, a group of liberal-leaning medical professionals, said refusing to perform the procedure as a means of protest only puts more women's health at risk.

"The ability to receive abortion care without delay is critically important to women's reproductive health, as having later abortions can pose a higher risk," Human Med said in a statement.

"Knowing this, physicians protesting against the government's decision by going on a 'strike' only makes matters worse for women (in need of abortions). If the members of the Korean College of Ob & Gyn truly wants to protest the newly introduced laws, they should first empathize with those who will be affected by them the most -- women (who cannot access safe and affordable abortions)."

Moon Sul-hee, a pro-choice, women’s rights activist, also said while she understands the Korean College of Ob & Gyn's stance, it is not ideal to use women’s health and their reproductive choice as bargaining chips.

“Rather than focusing on their own interests, I hope doctors can talk more about how to secure women’s rights to health and health care,” she told The Korea Herald.


Under articles 269 and 270 of South Korea’s Criminal Act, any woman who undergoes an abortion could face one year of imprisonment or a fine of up to 2 million won ($1,807).

Although the law, which was implemented in 1953, has been only sporadically enforced, many women’s activists in the country have been calling for legalization of abortion. Last year, more than 230,000 Koreans signed a petition to the presidential office to abolish the law.

In spite of the current ban, studies show that abortion is common in South Korea. A survey by the Korean Women’s Development Institute showed that 1 in 5 Korean women who have been pregnant have had an abortion. Only 1 percent said they had legal reasons -- such as rape and incest -- to undergo the procedure.

According to a study by the Korean Association of Obstetricians and Gynecologists, some 3,000 abortions are performed daily in the country. 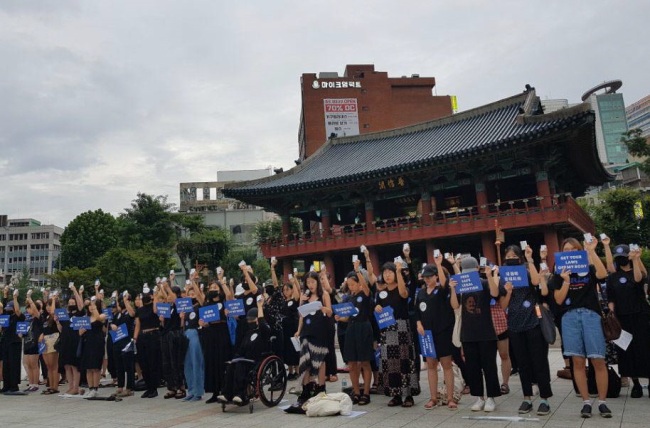 A group of South Korean women protest the current abortion ban in the country in central Seoul on Sunday (Yonhap)
Meanwhile, Women on Web, an international online abortion help service based in the Netherlands, says at least 2,500 Korean women have aborted using abortion pills, which are illegal in Korea, through their service since 2010.

The organization, which is led by a gynecologist, has been mailing the tablets to those who cannot access safe abortions in their countries. The World Health Organisation recommends home use of the abortion pill.

Among all Korean women who had an abortion through Women on Web’s service in 2017, 67.6 percent said they had no financial means to raise a child.

Won Young-seok, a gynecologist who runs his own clinic, said more than 90 percent of women who contacted him for abortion were those with low income.

“I’ve also encountered many teenagers and mothers who already had too many children,” he said. “Banning abortion and imposing harsher punishments on doctors do not take such realities into account.”

Rebecca Gomperts, a Dutch physician and founder of Women on Web, said abortion should be legalized in South Korea because women “have the right to have an abortion with dignity, without being scared to be found out for doing something something illegal.”

“Abortion has to be legalized, accessible and free to achieve real social justice for all women, also for women who are poor, women whro are in a violent, controlling relationship, and women who cannot travel, homeless and undocumented,” she said during her visit to Seoul on July 5.

“Until abortion is legalized in Korea, Women on Web will be there for all women in need of help.”