In the very last archery event at GBK Archery Field, the team of Kim Jong-ho, Choi Yong-hee and Hong Sung-ho defeated India in a shoot-off for South Korea's fourth archery title in Jakarta.

South Korea wrapped up the archery portion of the Asian Games with four gold, three silver and one bronze, well short of its goal of winning every gold. 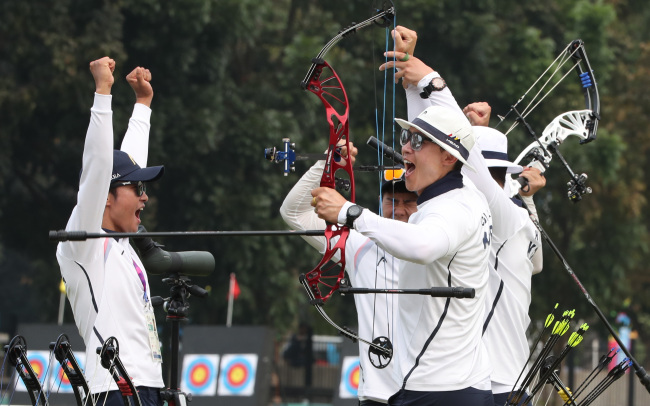 (Yonhap)
Compound archery was added to the Asian Games in 2014, and South Korea finished second to India in the inaugural men's team event in 2014.

From four years ago, Choi was the lone returnee for South Korea, while India had two members of the 2014 championship team, Rajat Chauhan and Abhishek Verma.

Cumulative scoring determines the winner in compound team event, with each archer firing two arrows per "end" for six for the team. A set win is worth two points, and a tie is worth one point.

The two went to a shoot-off of three arrows. They were still tied with a score of 29, but South Korea was declared the gold medalist because it hit one inner 10 compared to none for India.

Three of South Korea's four archery gold medals in Jakarta came on Tuesday. The men's recurve team and the women's compound team won their respective finals and set the stage for the men's compound team to close out the archery competition with a bang. (Yonhap)