The winners of the Korea Artist Prize 2012, Moon and Jeon’s exhibition will be held alongside the museum’s 30th anniversary exhibition, a retrospective of Fernand Leger. 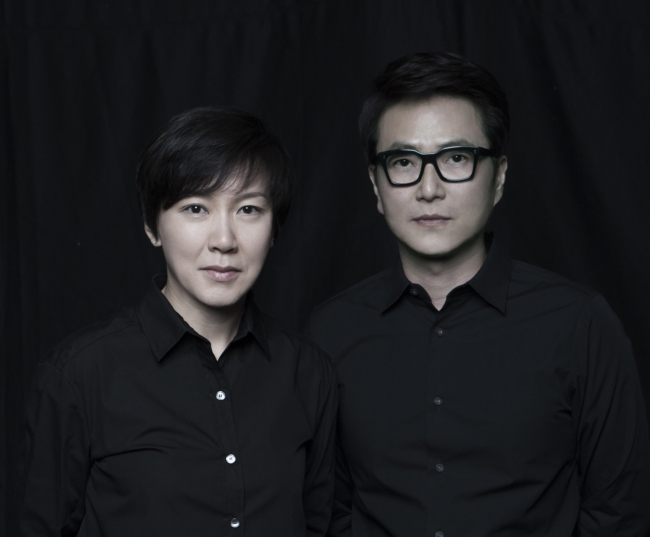 Artists Moon Kyung-won (left) and Jeon Joon-ho (right) (Gallery Hyundai)
Like Leger got his teeth into reality -- than abstract art -- after returning from the First World War, Moon and Jeon also try to find what art can do in reality. In the same way that Leger attempted to find hope after experiencing the devastating war, the two Korean artists have also brought an apocalyptic setting to find new meaning in art.

Included in Moon and Jeon’s upcoming exhibition is “El Fin del Mundo,” or “At the End of the World” -- the two artists’ two-channel film introduced at Documenta 13 in Kassel. The two channels show a man who continues to work on his art despite the impending apocalypse and the daily life of a female descendant of survivors.

“We came up with an apocalyptic setting for the film to take ourselves away from the conventional notions of art and more freely envision new modes of art,” Jeon said during a press conference in Seoul on Monday.

For the upcoming exhibition at Tate Liverpool, Moon and Jeon also made a newly commissioned work titled “Anomaly Strolls,” a video-sculpture assemblage. “Anomaly Strolls” features a video filmed in Liverpool on a screen decorated with metal parts taken from abandoned ships from local docks. 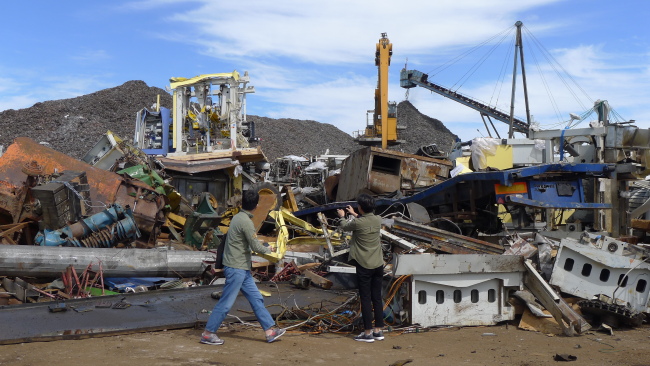 Artists Moon Kyung-won and Jeon Joon-ho collect metal parts from the remains of abandoned ships in Liverpool for their newly commissioned work “Anomaly Strolls.” (Gallery Hyundai)
The new fictitious documentary film imagines the male character from “El Fin del Mundo” as being present in Liverpool, yet the character remains invisible to others. Only the cart that the man used to collect objects for his art reappears in Liverpool. Roaming around on its own, the cart continues to collect dumped materials, tracing the history of the city.

Alongside “El Fin del Mundo” and “Anomaly Strolls,” there will also be graffiti and lighting works exhibited at the gallery space.

All the works to be exhibited at Tate Liverpool are part of the artists’ project “News from Nowhere,” an ongoing project started in 2009. The project was named after the eponymous 1980 book by William Morris that depicts London 250 years in the future.

Like Morris’ “News from Nowhere or Epoch of Rest: Being Some Chapters from Utopian Romance,” Moon and Jeon’s project is an attempt at giving shape to possible futures.

Over the last 10 years, the two artists have cooperated and consulted with experts of various fields, including architecture, design, science, literature, film and fashion, in an attempt to create meaning that goes beyond the exhibits.

“It has been almost 10 years since Moon and I met to work on the ‘News from Nowhere’ project started in 2009,” Jeon recalled.

“The notion of communication, particularly the one between the public and art, sounded very abstract and cliched. Moon and I started the project from skepticism on that point. We wanted to figure out what arts really do, and what we are actually doing in the name of art,” Jeon said.

The “News from Nowhere” project comprises numerous interviews and pieces of art that discuss the end of the world as an archetype and the unique condition of our era. Each participant examines the present and envisions the future in their own ways.

“I still don’t have an answer for what art can offer. But there is one thing I have learned from cooperating with experts over the years. They all tried to erase or deconstruct boundaries. The same applies to art. We can no longer classify art into painting, sculpture and others. If art has a role, it will also be to deconstruct the boundaries,” Jeon said.

The exhibition will run through March 17 next year.