JAKARTA -- South Korea arrived in Jakarta with an eye on eight gold medals in fencing at the 18th Asian Games. After getting shut out on Sunday, the team claimed two gold medals on the piste on Monday.

Jeon Hee-sook and Gu Bon-gil won the women's foil and the men's sabre individual titles on Day 2 of the Asian Games. It was Jeon's second straight gold and Gu's third in a row.

Gu's victory in the final came against his teammate Oh Sang-uk. 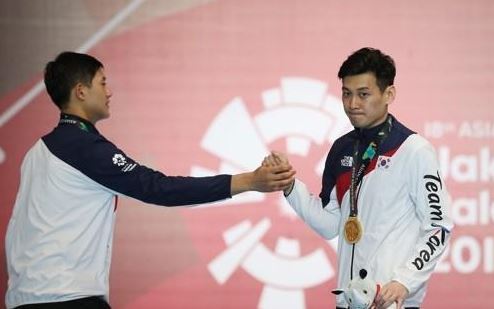 One other gold for South Korea on Monday came from taekwondo, where Kim Tae-hun won the men's 58-kilogram title.

Kim had topped the men's 54kg at the 2014 Asian Games in Incheon. It was also South Korea's first gold medal from taekwondo "kyorugi" (sparring) competition at these Asian Games.

South Korea sent two other fighters to the final, but both Kim Jan-di in the women's 67kg and Ha Min-ah in the women's 53kg had to settle for silver.

The Asian Games will wrap up on Sept. 2.

Also on Monday, the men's football team advanced to the round of 16 with a 1-0 win over Kyrgyzstan in Bandung.

Tottenham Hotspur star Son Heung-min scored the winner for the beleaguered squad, under fire from the famously demanding and fickle fan base since their 2-1 loss to Malaysia last week.

South Korea, which ended up in second place in Group E, will face Iran, the Group F winners, in the round of 16 on Thursday.

There were other medals won on Monday. South Korea's silver in the team dressage event in equestrian ended the country's string of gold medals at five.

South Korea picked up two more bronze medals in freestyle wrestling, a day after winning a pair. On Monday, it was Kim Hyung-joo in the women's 50kg and Nam Koung-jin in the men's 125kg.

In Palembang, a co-host city located 430 kilometers northwest of Jakarta, South Korea got two silver and one bronze in shooting.

Jung Eun-hea was second in the women's 10-meter air rifle at Jakabaring Sport City Shooting Range, and she was followed by Kang Gee-eun's silver in the women's trap and Ahn Dae-myeong's bronze in the men's trap.

North Korea was busy collecting four gold medals on Monday, with its first two gold medals of the competition both coming from weightlifting, its traditional goldmine.

Ri Song-gum had the honor of winning the North's first gold by taking the women's 48kg title. Then Om Yun-chol followed suit by defending his gold in the men's 56kg division.

North Korea trails South Korea by just one gold medal, though the South has won 24 medals in total to the North's seven.(Yonhap)