[ The Korea Herald – Send E-mail ]
“South Korea is no country for women”: Women’s groups protest acquittal of top politician
By Claire Lee
Published : Aug 19, 2018 - 18:19
Updated : Aug 19, 2018 - 20:45
Some 20,000 South Korean women gathered in central Seoul on Saturday to protest the court’s recent decision to acquit a powerful politician of sexual abuse charges, claiming the judiciary is now complicit in gender-based violence that has prevailed in the country.

An Hee-jung, the former South Chungcheong Province governor and a onetime presidential contender, was found not guilty of sexual assault through abuse of authority Tuesday. An’s trial had been considered one of the highest profile cases to have emerged from the #MeToo campaign in South Korea, which began to spread in February this year.

“(South Korea is) no country for women,” one of the signs read. “An Hee-jung is guilty. So is the court.” 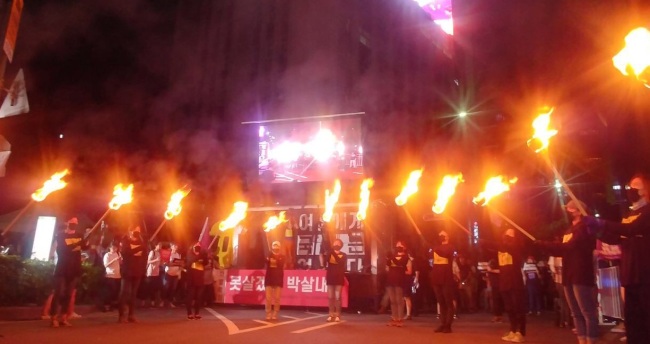 An’s accuser, Kim Ji-eun, made public her accusations through a live TV interview in March, saying she was raped by An four times while working as his aide from 2017 to February this year. Prosecutors last month requested four years in prison for An, who had been charged with five counts of indecent act by compulsion, four counts of sexual abuse by occupational authority and one count of indecent acts through abuse of occupational authority.

An pleaded not guilty to all of the charges, saying his extramarital relationship with Kim was of a consensual, romantic nature.

The court acquitted An of the charges, saying there was “insufficient evidence” to show he abused his power to pressure Kim into having sex with him, and there were “inconsistencies” in Kim’s testimony.

The fact that Kim tried to find Korean-style tofu soup for An the day after being allegedly raped in Russia while the two were on a business trip together, and that Kim visited a hair salon in South Korea where An was a regular after returning from the trip had been considered, the court said.

Women’s activists say that An was acquitted because Kim did not “behave like a victim” by the court’s standards. Kim did not quit her job, did not file a complaint and continued with her duties as An’s aide after being raped. This, experts say, shows the Korean judiciary’s unrealistic idea of how a rape victim should behave and thereby makes it complicit in the nation’s violence against women.

“Kim was a working professional, and (being An’s aide) was her job,” Kwon Kim Hyun-young, a feminist scholar, said at the rally.

“She was a working professional who had to still come in to work in spite of having been abused by her boss the previous day, to survive and to not lose her career. There are countless working professionals in this country who still go to work in spite of having been harassed by their boss in the past. We all know that the court’s logic does not make sense.”

Kim Ji-eun sent a letter to the rally, which her lawyer Jeong Hye-sun read on her behalf. Kim said she at times felt that the only way to prove her words was to take her own life.

“(Unlike An Hee-jung,) I don’t (personally know) any judges, powerful politicians, journalists or police officers,” she wrote in her letter.

“I’m just a laborer and an ordinary citizen who tried to work hard every day. I’m speaking to my fellow citizens. What I’ve experienced is the same as what you may have experienced at work, the power abuse and harassment from your superiors. Judges say sexual abuse is an exception. But what is the difference? How is my experience different from other forms of power abuse that we face in our daily lives?” 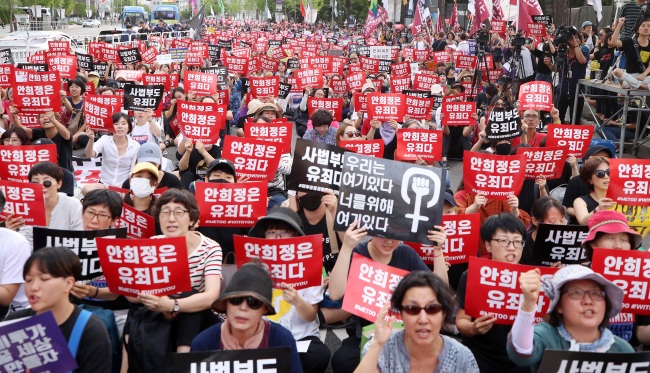 Women prosters hold a sign that says "An Hee-jung is Guilty" at a mass rally held in central Seoul on Saturday. (Yonhap)
A woman in her mid-30s who attended the rally said she felt the court’s decision was a form of victim blaming.

“The court is basically saying that Kim is responsible for what happened to her after the first incident of sexual assault because she continued with her job, which was to be An’s aide,” she told The Korea Herald.

“I’ve witnessed countless incidents of sexual harassment in this country, including in my own workplace. Victims usually can’t directly fight back, especially when the offender is your superior at work. And for most people, it’s not that easy to quit your job. Most people simply can’t afford to quit.”