[ The Korea Herald – Send E-mail ]
After plastic-cup ban in cafes, some Koreans are ‘fed up’ with the new rule
By Claire Lee
Published : Aug 16, 2018 - 16:00
Updated : Aug 17, 2018 - 12:15
Han Ji-young, a professional in her 30s, was almost late for work last week. As she does every morning, she visited her go-to cafe to grab coffee on the way to her office in southern Seoul. The queue was unusually long that day, she said, partly because of the hot weather. When she finally got her coffee, after minutes of waiting, she realized the beverage was served in a glass mug, not the plastic cup that she usually gets for take-out drinks.

“It turns out, one of the staff members at the cafe made a mistake,” she told The Korea Herald.

“I made it very clear to her that my drink was to-go. But for whatever reason she thought I was going to have it at the cafe. And as the law changed recently, those who sit inside can only be served with nonplastic mugs.  To be honest, I was annoyed because it took them almost 10 minutes to make my coffee, and another five minutes to pour the beverage from the mug into a brand-new plastic cup. It was an unusually busy day at the cafe, but still, 15 minutes is a long time on a busy morning.” 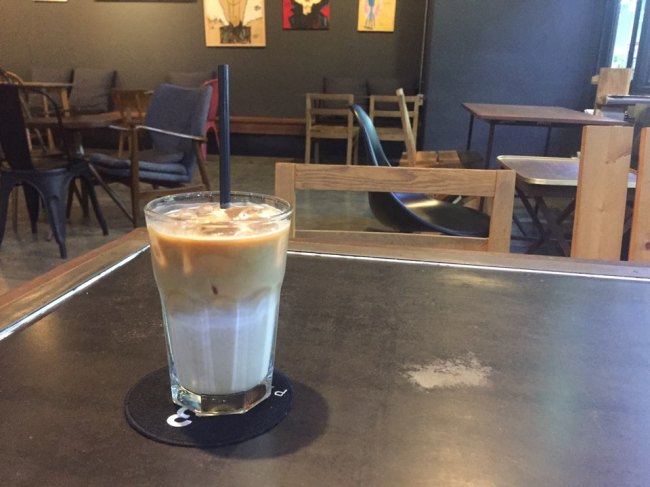 A coffee beverage is served in a glass mug, not a plastic cup, for an in-store customer at a cafe in northern Seoul. (Claire Lee / The Korea Herald).
Han is one of many Koreans who have been affected by the recently introduced rule banning the use of plastic cups for in-store customers at all cafes, including major franchises such as Starbucks, Ediya Coffee, Angel-in-us Coffee, and A Twosome Place, among others. The rule in fact affects millions in the country, where more than 18,000 cafes are in operation in Seoul alone. The number is more than the number of all cafes in Seattle and New York combined.

The ban was implemented in response to a massive plastic waste crisis in South Korea, which ensued after China halted imports of plastic waste back in January this year. For years, China has imported about half of the world’s waste, including South Korea’s.

With the new rule in effect since May, plastic cups can only be used for take-out drinks in all cafes in South Korea. However, many Koreans, including those who work at cafes as well as customers, are struggling with the change. Some say they are "fed up" with the new rule.

A 23-year-old university student, who works at a cafe near Hongik University in Seoul, said she almost wanted to quit her job a few times because of the new rule. Her biggest challenge has been dealing with liars, she said.

“The situation isn’t complicated. People would just lie that they want the drinks to-go, and then just stay inside,” the student, who did not want to be identified, told The Korea Herald.

“Many are just not used to using glass mugs at cafes. Some want their drinks in plastic cups in case they want to leave the cafe before finishing their drinks. There are many reasons why people lie, and I’m so fed up with having to deal with them.” 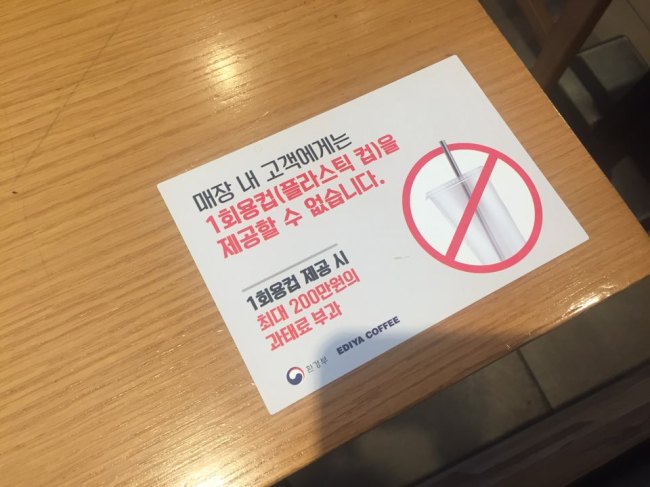 A sign that says in-store customers cannot be given plastic cups for their beverages and that business owners will be subject to a fine of up to 2 million won ($1,769) if they violate the rule is placed on a table at an Ediya Coffee outlet in Seoul. (Claire Lee / The Korea Herald).
The student said she has been harassed by a number of customers over the issue, especially elderly Koreans who accused her of being rude when she asked those who got their drinks in plastic cups to leave the cafe, unless they wanted to switch to glass mugs instead.

“That’s another thing,” she said. “The rule basically gives me more work, while I’m not getting paid more. When in-store customers need to leave before finishing the coffee, I have to pour the remaining beverage into a plastic cup so they can take it out with them. Whenever this happens, other customers in line have to wait longer. But as far as I know, my employer has no plan to hire more people.”

The new rule is part of the Korean government’s plan to cut the country’s plastic waste by 50 percent in the next 10 years, following China’s ban on “foreign garbage.” Starting Aug. 2, any Korean coffee business owner who violates the new rule is subject to a fine of up to 2 million won ($1,769).

The Ministry of Environment has been dispatching its officials to clamp down on coffee businesses since Aug. 2, and would fine cafe owners if it sees violations.

Business owners say it is unfair to punish businesses instead of customers. They also say the change took place abruptly, without prior notice.

“Since we didn’t know this rule was going to take effect, many small business owners, including myself, had purchased thousands of plastic cups earlier this year. Now, these boxes of plastic cups are just sitting in the garage, unopened and unused,” said Jeong Yeong-in, a businessman who owns a cafe in Hoegi-dong in Seoul.

“And then we had to abruptly bring in glass mugs for in-store customers. It’s also hard to deal with customers who initially wanted their drinks to-go (and get their drinks in plastic cups), and simply say they ‘changed their minds’ and stay inside. I just wish this new rule could have been implemented with more time and guidelines.” 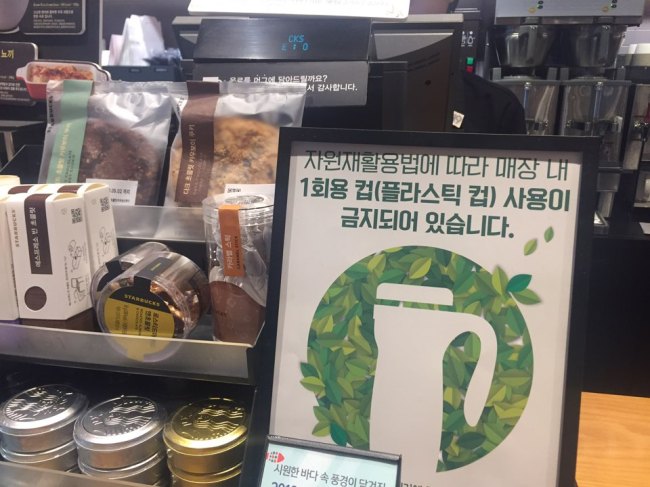 A sign that says in-store customers cannot be given plastic cups is displayed at a Starbucks outlet in central Seoul. (Claire Lee / The Korea Herald).
Park Jeong-cheol, an official from the Ministry of Environment, said coffee businesses would not be fined if it is the customer who insisted on staying inside with a plastic cup despite being informed of the rule by staff.

“Our inspectors will speak to customers as well -- on top of cafe employees and business owners,” he told The Korea Herald. “Many things will be considered before fining businesses.”

South Korea remains one of the biggest consumers of disposable products worldwide. According to a 2016 government report, the country consumed 98.2 kilograms of plastic products per person, ranking top in the world.  Statistics show that as of 2015, each Korean person used 420 plastic bags every year, while a single person in Finland used four, and each German used 70.

Kim Hyun-kyung, an environmental activist at the Seoul Korean Federation for Environmental Movement, said the ongoing change is necessary and important, despite the existing “complaints” and problems.

“I think we are in a phase where people are still getting used to the change,” activist Kim told The Korea Herald.

“I think we eventually have to get to the point where people don’t even have be informed that they have to use non-plastic mugs in cafes if they are going to sit-in. It has to become part of our common sense. I think we need more educational programs to inform the public that we are all connected on this planet, and what we consume and discard affect the lives of others.” 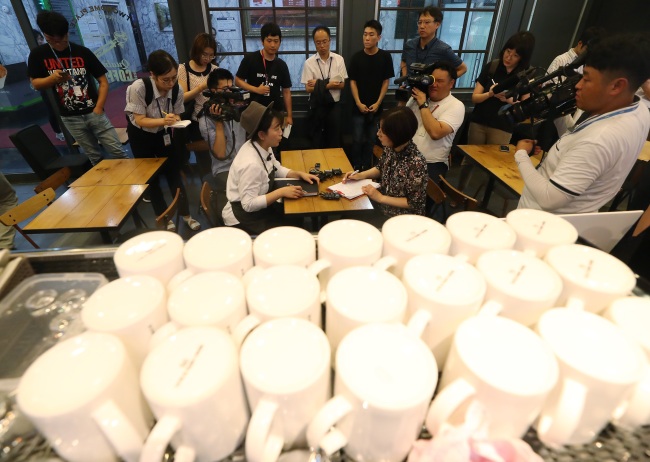 An official from the Ministry of Environment show the press how clamp-downs on coffee businesses are being done at a cafe in Seoul, on Aug.2. (Yonhap)
Some say the new rule, although serving an environmental cause, has put a burden on some of the most vulnerable people in the labor market -- part-time workers.

Han Byul, an official at Albanodong, a part-time workers’ union, said a union member who works at a cafe is having a hard time because of the increase in the dishwashing load after the new rule came into effect.

“We understand the reason for this new rule, and that we have to save the environment,” Han told The Korea Herald.

“But this has put a heavy burden on those who work at cafes, many of whom are contract or part-time workers. They now have to do extra work, including doing dishes, among other tasks. Our members think that employers should be given support to hire more people, especially during the busiest hours, including lunch time and early in the morning, so that people can share the workload.”

Environmental activist Kim said she empathizes with the part-time workers and the hardships they face. She had a number of suggestions to offer.

“I think big coffee franchises have the capacity to hire additional staff who can only focus on informing the customers of the new rule, and why it is necessary. The government can help by prizing the companies who hires more people for this specific role,” she told The Korea Herald.

“As for the increased dishwashing load, I think cafes can create a space where customers can wash their own mugs after finishing their beverages. Of course, firms can’t force all customers to do this, but they can encourage this option by giving those who do it a discount, among others.”