Two of the three dog butchers channeled what was washed away from the slaughterhouses, including blood and feces, into a nearby construction site, causing a stench as well as water pollution. 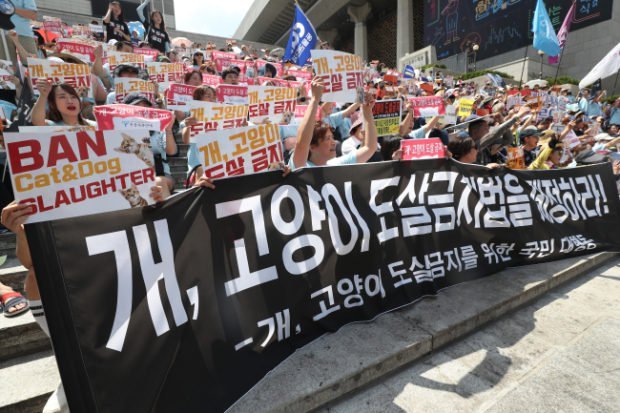 Protesters hold signs asking for the ban of cat and dog slaughter in front of Sejong Center in Jongno-gu on July 15. (Yonhap)
Those who release more than 100 liters of wastewater from the slaughtering process are required to report to the ward office in advance, and run it through wastewater treatment systems.

The other offender had slaughtered an average of 10 dogs a day since 2009 without reporting his business to authorities. Operators of livestock facilities larger than 60 square meters are required to report to the ward office.

The dog butchers purchased dogs from farms or auctions around Gyeonggi Province and raised them in facilities adjacent to the slaughterhouses. When there was demand for dog meat, they slaughtered the dogs early in the morning and delivered the meat to the restaurants.

Seoul City’s special enforcement division plans to refer the three to prosecutors and inform related government agencies of the case.

The three dog butchers could face up to five years in prison or a fine of up to 50 million won ($44,300) under laws on water conservation and management of livestock waste.

Separately, Seoul City announced there will be no more dog slaughterhouses at Kyungdong Market in Seoul’s northeast neighborhood of Dongdaemun from next year.

The city government has recommended dog slaughter businesses, mostly in Kyungdong Market and Jungang Market in Seoul’s central Jung-gu, stop slaughtering and change to other trades.

As a result, three of the eight dog slaughter businesses in the two traditional markets closed shop last year, and another three stopped slaughtering. The two remaining butchers have reportedly decided to stop killing the dogs from January next year.

Cheong Wa Dae said last week it would consider revising the law on domestic animals to remove dogs from the list of livestock, although prohibiting the consumption of dog meat altogether may take more time and greater discussion.

“The government will consider revising the related regulations so that dogs may be removed from the list of livestock,” Choi Jae-kwan, a senior secretary to President Moon Jae-in for agricultural and fishery issues, told reporters regarding a petition posted on the Cheong Wa Dae website seeking to ban the consumption of dog meat.

“We must also consider the livelihoods of the people engaging in the related business,” Choi said.

“We expect the system to change gradually in line with social discussions.”